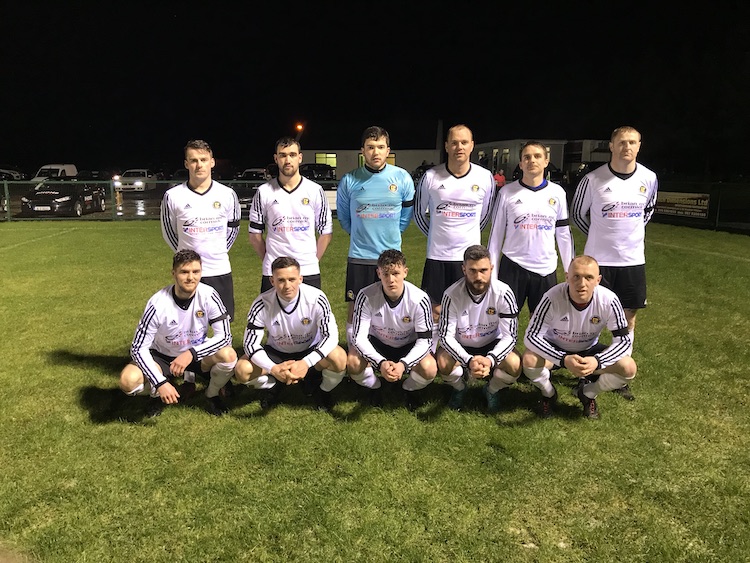 The Donegal League bowed out of the Oscar Traynor Trophy after suffering a gut-wrenching penalty shoot-out loss to Limerick in Gweedore tonight.

By Charlie Collins at An Screaban

Shane Clarke gave Limerick a 47th minute lead as he tapped in from 10 yards after Mikey Ryan drew out the goalkeeper, Christopher O’Donnell, and unselfishly squared.

However, Donegal were level when Ronan McHugh pounced.

The Donegal Town hitman hammered home after James Doherty’s cross was only half-cleared by the Limerick defence.

O’Donnell thwarted Adrian Power before the Castlefin Celtic stopped produced a wonder save to deny Clarke, whose header looked for all the world to be heading to the net.

Matthew Crossan had to clear from beneath the bar after Clarke lofted over the advancing O’Donnell on 85 minutes, but the night ended somewhat controversially.

Andy Murphy fired into the top corner and it looked like the winner, only for Mick Lagan, the linesman, to have flagged an offside against Clarke.

Limerick were incensed, arguing that Clarke wasn’t interfering with play and that Murphy wasn’t offside.

Extra time came and went and it was down to penalties.

The game was moved to An Screaban, the home of Gweedore Celtic, after The Diamond Park in Ballyare failed a lunchtime inspection.

Early on, Shane Clarke connected with a free kick, but flashed a warning shot just wide of the Donegal goal.

Donegal League found a way through when Cory Gallagher and Raymond Foy combined in a neat passage to set Kevin McHugh up.

The former Finn Harps striker stepped past a defender and tested Mulready from 20 yards. Mulready was equal to the attempt, parrying clear.

An excellent Donegal move saw Gallagher crack against the crossbar after Mulready had denied Foy. Daire McDaid was sent on his way by Ronan McHugh and McDaid’s cross invited the header from Foy, but Mulready reacted superbly.

Mulready denied Foy on the half-hour as Donegal probed with intent.

Limerick had a big chance themselves as O’Donnell, the home goalkeeper, saved from Clarke, but it was a chance the attacker will feel ought to have resulted in a goal.

Clarke, however, wasn’t to be denied two minutes into the second half.

McHugh brought the home team onto level terms, but the night ended in agony.