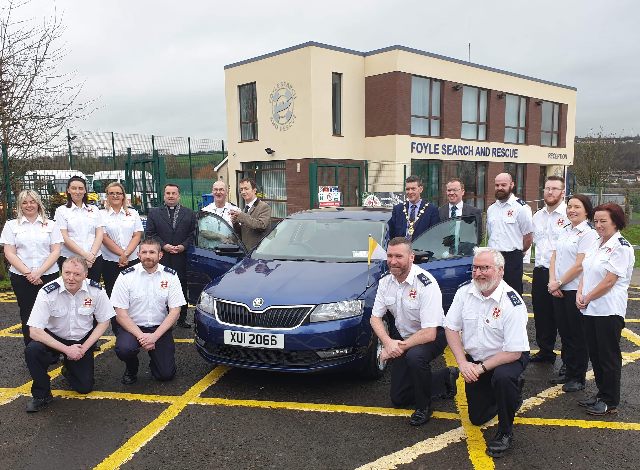 Keys to Popemobile handed over to Foyle Search and Rescue

One of the cars used by Pope Francis during his Irish visit has been formally handed over to the Foyle Search and Rescue charity.

The Skoda Rapid estate was gratefully received by the Derry-based lifesaving volunteers on Tuesday.

Fr Tim Bartlett, who coordinated the Papal visit, travelled to Derry for the official handover and spoke of the Pope’s wish that the vehicle be used daily to help others.

Mayor John Boyle was also present when the car was formally handed over to FSR.

The SDLP councillor said: “I got to sit in the Pope Mobile yesterday.

“A great gesture from Pope Francis that will mean a lot to Foyle Search & Rescue in their efforts to keep people safe.”

Many memorable scenes from the Pope’s visit to Ireland last August featured the blue Rapid cars, as Skoda was the official car partner to the World Meeting of Families 2018.

On Pope Francis’ return to the Vatican, it was announced that both cars would be donated to charity.  Archbishop of Dublin, Diarmuid Martin, decided that Foyle Search and Rescue should have one car to help carry out their work.

Foyle Search and Rescue was set up in 1993 by local people in Derry in response to the high number of drownings in the River Foyle.  The service now includes suicide prevention and supporting families in the city.

The second Skoda car was given to the social care agency of the Catholic Church in Dublin, Crosscare.

Keys to Popemobile handed over to Foyle Search and Rescue was last modified: February 6th, 2019 by John2
Facebook0Tweet0LinkedIn0Print0