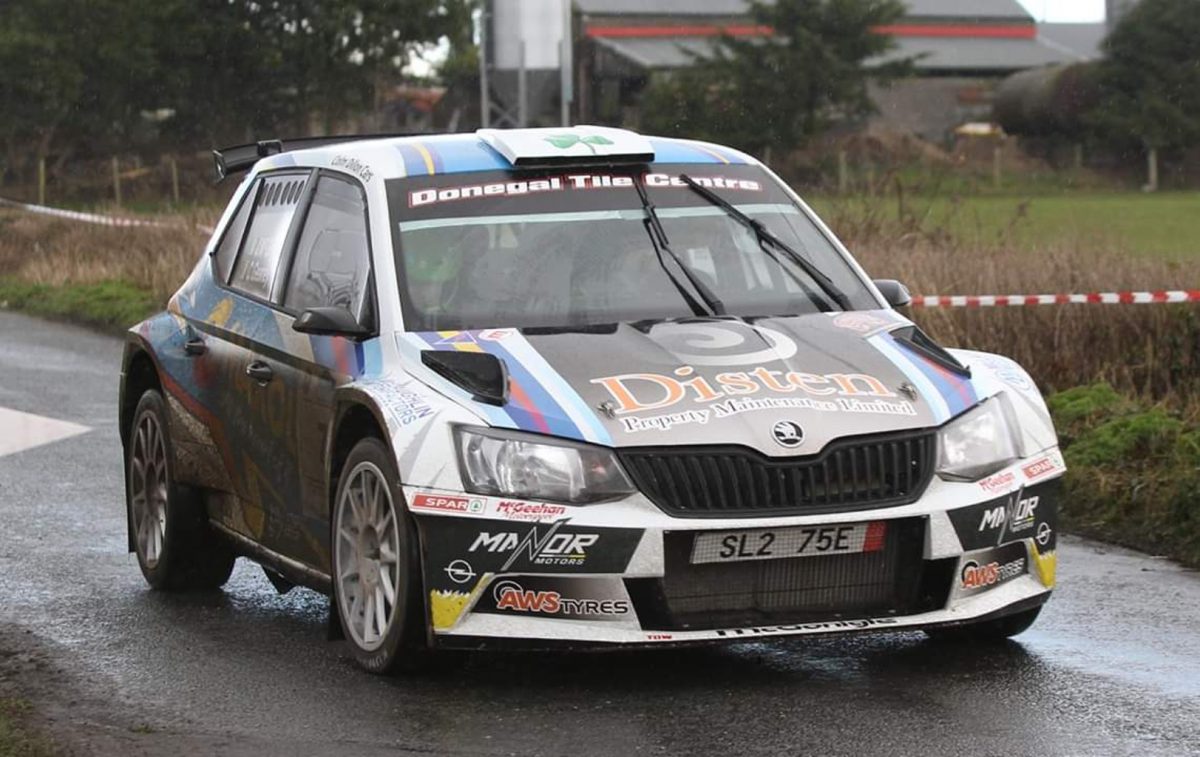 DD Motoring: All eyes turn to the Galway International Rally

In a preview special of this weekend’s Galway International Rally, Brian McDaid takes a look through an all-star cast of Donegal competitors lead by Declan and Brian Boyle as they prepare to compete on what’s looking like the best Galway Rally in Years

When you live and travel along the western coast of Ireland you soon get to know the way trends work with towns and villages closing down. The names left still above shop doors that have long been vacated.

That’s the way it looked two years ago when we watched the 2017 Galway Rally that just got running and no more that year. It felt the writing was on them famous Galway’s stone walls and the Galway International Rally was going to be only a memory. 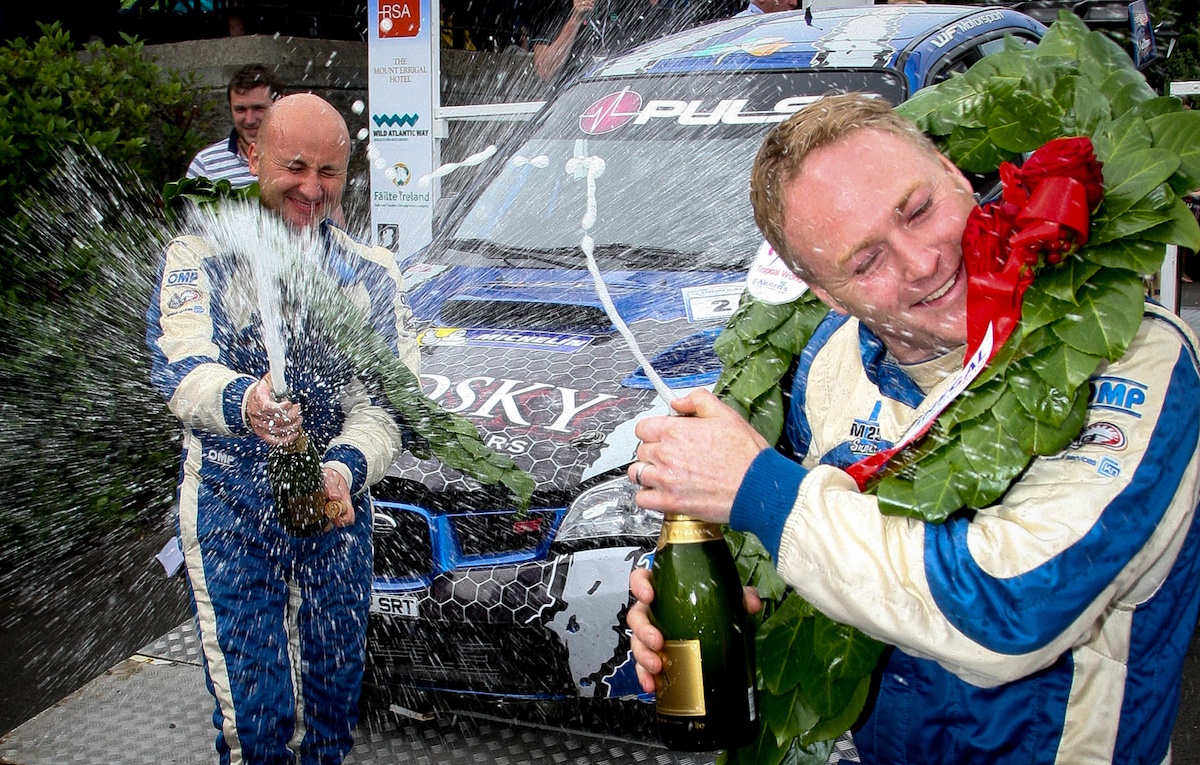 That winning feeling… Declan and Brian Boyle celebrate on the finishing ramp at the Mt Errigal Hotel as they win the Donegal International a few years back. They will lead the Donegal Crews out on Sunday Morning for Galway International in their Ford Fiesta R5. Photo Brian McDaid

The then Galway Motor Club went back to the drawing board and cut their cloth to suit the needs of the present day competitor and have returned with what looks like a winning package.

In a class of his own

There was only one R class of note running around the West of Ireland last year with the Galway Rally off the road, that was Pope Frances in his Skoda Rapid, as he flew into Knock International Airport and travelled in style for 20km up the road in the modern Skoda on his visit to Knock Shrine.

One year on and there is an abundance of R5 class Rally cars in the West with the Galway International returning in style. Twenty-five and counting R5’s in top 30 lining up for the 2019 rally start this weekend.

Curley messaged me this week: “Hi Brian, are you for the Galway Rally on Sunday? “I will be, hopefully, sir.,” I replied.

“Good On U, I might see you down there over the weekend,” Curley said.

Our Curley, not to be mistaking for Curley as in Cathal CB Curley, who also has a Galway connection as he was the first winner of the Galway International Rally in 1971 in a twin cam Escort Mk1 with Austin Frazer co-driving.

Our “Curley” is also locally known as Curley Kelly, (Martin) a big rally man with his brother Anthony.

Both of them were in my class in the boys school in the early 70s when the other Curley was making himself a household name in rallying circles, and come the weekend we will all be in Galway for the rally.

The 2019 Galway International Rally will have a bit of a back to school ring to it this weekend.

All the old familiar names like Kelly and Boyle and even Breen will be in the new R5 class. 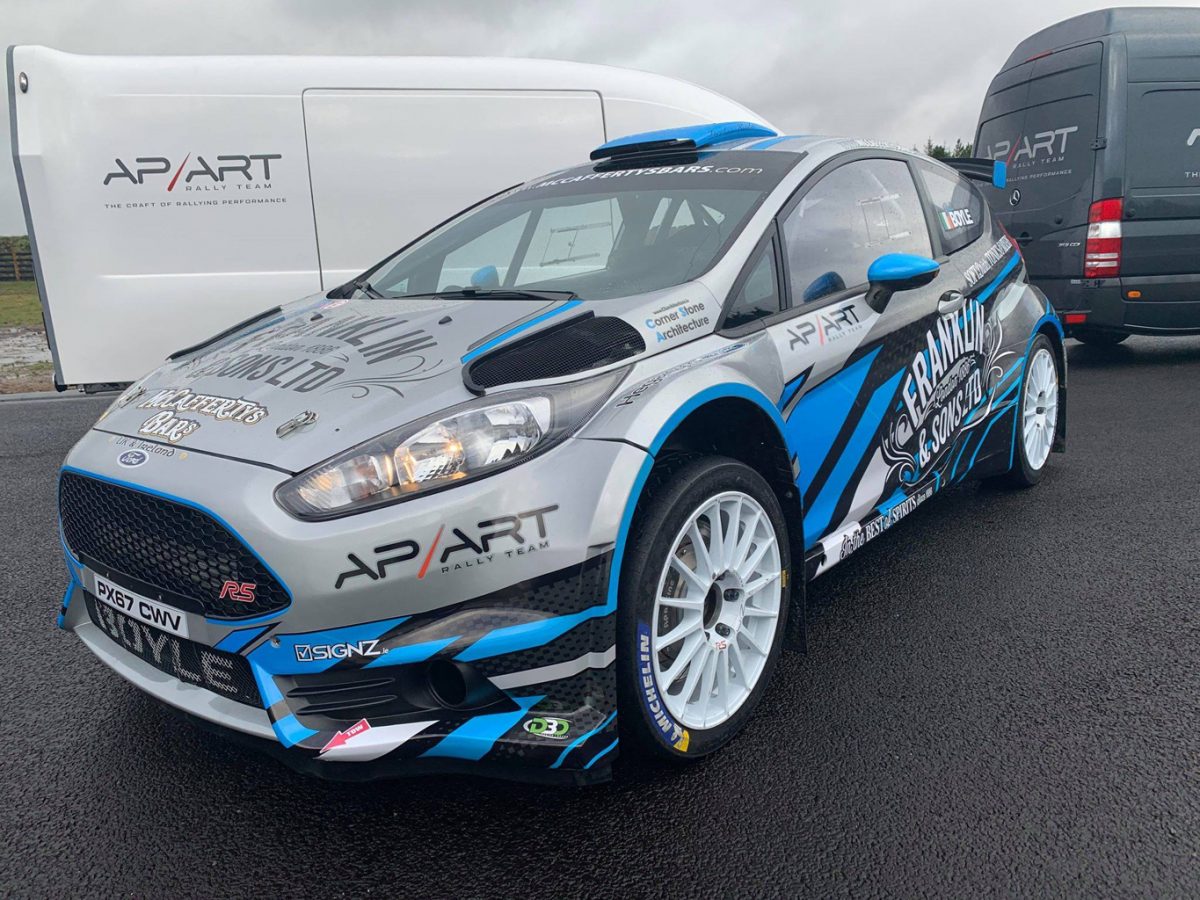 Declan Boyle’s Fiesta R5 ready for Galway this weekend with Brian Boyle back on the notes.

The teacher even moved Manus Kelly over to the passengers’ side of his desk and gave him a steering wheel on the left with Barrett calling the notes from the driver’s side of their Hyundai.

The learning curve will be tight on Sunday morning as event organisers have concentrated the event into a single day.

Those like the two Moffetts from Monaghan Josh and Sam have their homework done over the last few seasons in class R5, so expect them to be very quick out of the box on Sunday morning.

Their biggest challenge will be from the top of the class when world rally material of Craig Breen and Paul Nagle are seeded at Number One.

Former works Citroen driver and also a winner of the Circuit of Ireland in 2015 Breen will be the man to watch on the Irish championship opener of the Galway a winter equivalent of the Monte Carlo Rally.

Galway is a winter rally and anything can happen when the weather or road conditions change so quickly.

The top crews to factor this into their preparation to do well this weekend. Breen is in one of the twenty-some R5s that will take part in the rally with is based a the Clayton Hotel on the outskirts of Galway.

On Sunday morning, it will not only be the Fields of Athenry that are be lying low, crews will strap themselves in to their new machines and, instead of watching small free birds fly, we’ll enjoy the sweet note of highly tuned Fiestas, Skoda’s, and Hyundai’s as the new breed of rally cars migrate west to compete in the stage around the roads that sit along the Fields of Athenry which is where the rally is based on Sunday.

On the last Galway rally, two years ago Donegal’s Damien Tourish nearly won the national title in a lower powered version of his present Escort. Watching the resurgence of this talented driver over the last few years he will be a man to watch on Sunday morning. 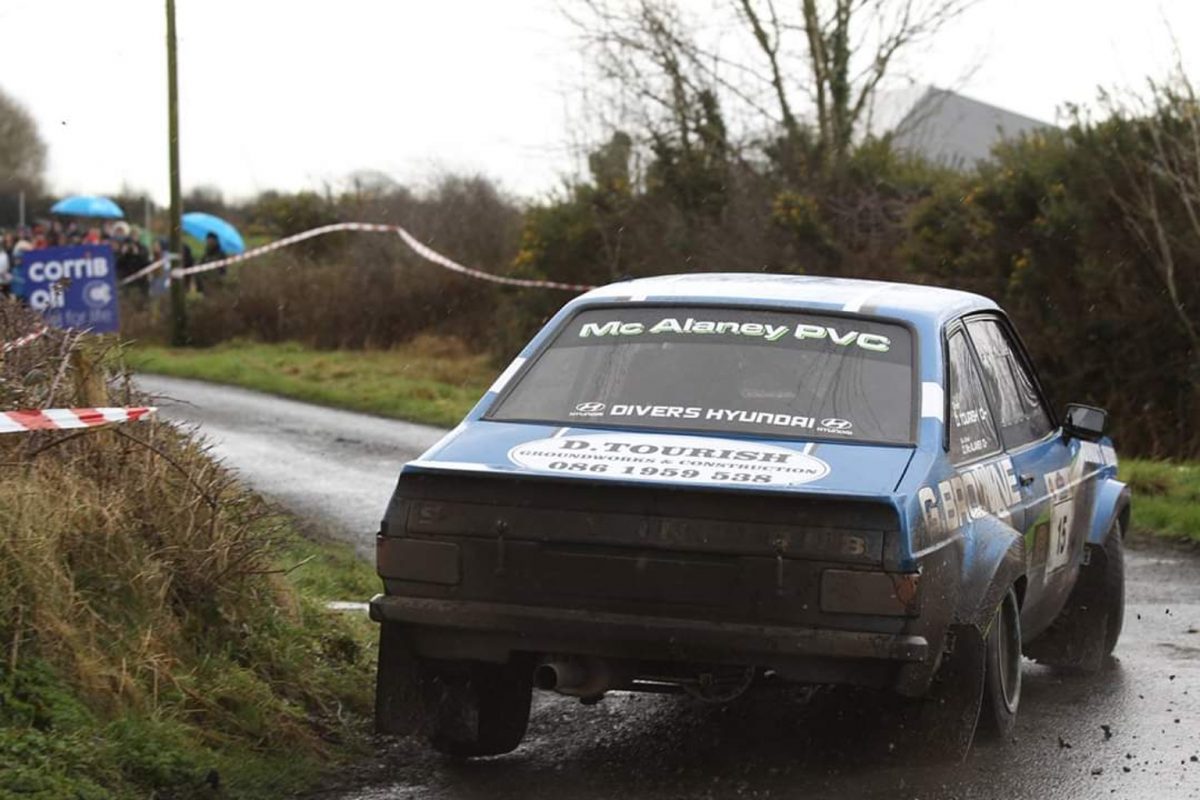 Damian Tourish on the Galway International Rally in his Escort leading the modified section in 2017 Photo Brian McDaid.

Damien and his navigator Domhaill will have every inch of tar and then some on Sunday, which could serve very well on Galway on Sunday in the modified section.

Seeded at number two, back to back winners of the last two events Fermanagh Flyer, Gary Jennings has only the one plan this weekend and that’s to go for a win.

Chatting with his navigator Rory Kennedy earlier this week, with more wins than any other competing on the Galway as co-driver, the five times winner believes his teammate Jennings has few options with their Subaru – with it being not eligible to score points in the championship. other than to go for an outright win.

But Rory is more than aware of how much of an uphill battle this will be. 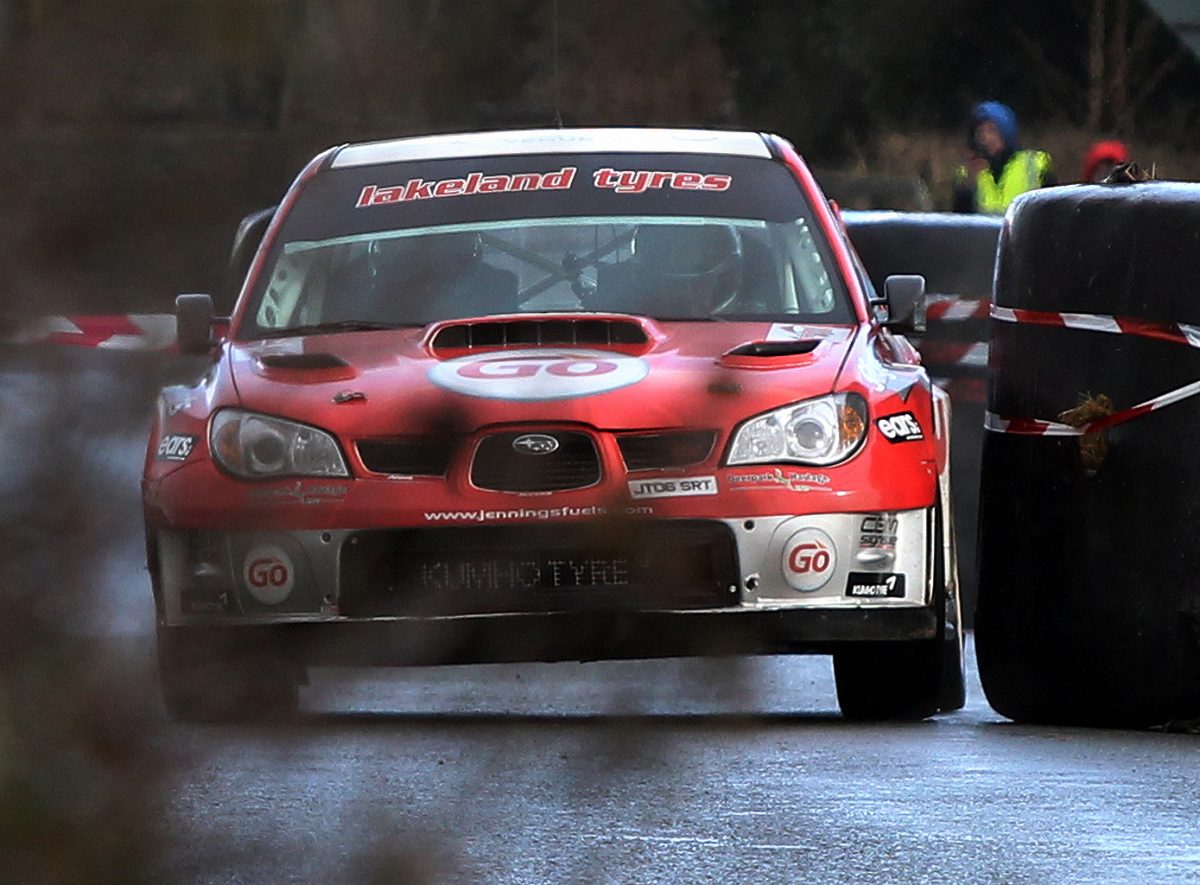 Gary Jennings and Rory Kennedy on their way to winning the Galway International Rally in 2017. Photo Brian McDaid.

Manus Kelly has three Donegal wins under his belt, he will be fast, as will Donagh Kelly, and Declan Boyle with Brian Boyle back on the notes.

All these boys have their homework done for Galway but, there so many more drivers that will be out for a win.

Josh and Sam Moffett have both held the tarmac championship title over the last few years.

And Breen is world class material so Craig and Paul Nagle have to be favourites for an outright win.

The rallying pilgrimage to Galway from Donegal will start as it always does on Friday evening.

Instead of Casio Square in Monto Carlo, we will be happy to hit Eyre Square in Galway where on Friday night we sort maps, get coffee, and eat grub to go and then try to figure out where we are going to enjoy the rally on Sunday.