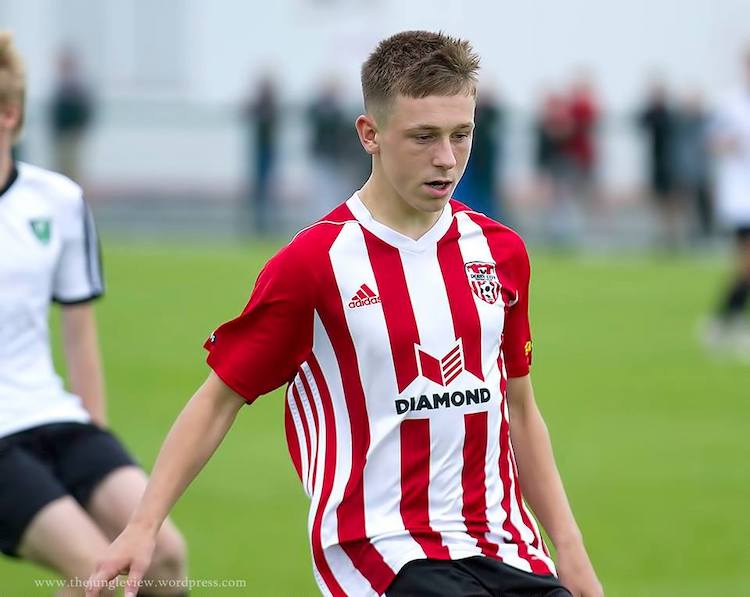 Ronan McKinley selected on Irish U17 squad for Spanish trip

Ronan McKinley has been named in a 20-man Republic of Ireland Under-17 squad for next week’s International Friendly double-header in Spain.

O’Brien’s side play Poland and Belgium in the space of three days in Marbella, as preparations continue for this May’s UEFA Under-17 European Championship which is held in Ireland.

McKinley (pictured by The Jungle View) who is on the books of Derry City and who has featured for Declan Devine’s first team in pre-season, has been called up.

The Newtowncunningham man has been a regular feature in Irish underage set-ups in recent years.

“The games will be very competitive. I’ve no doubt that both sides are aiming to be in Ireland in May. That’s the calibre of opposition we are looking for. It gives us more preparation time with the players”, O’Brien revealed.

Matches are at a premium ahead of the May tournament, and O’Brien admitted there is still opportunities for players to force their way into his Finals squad.

“We want to look at players throughout the season. There are some new players in the squad and they have a chance to show us what they can do. They are players unlucky not to make the squad and they are still in consideration for May.”

Ireland travel to Spain this weekend, before the opening match on Wednesday, against Poland.