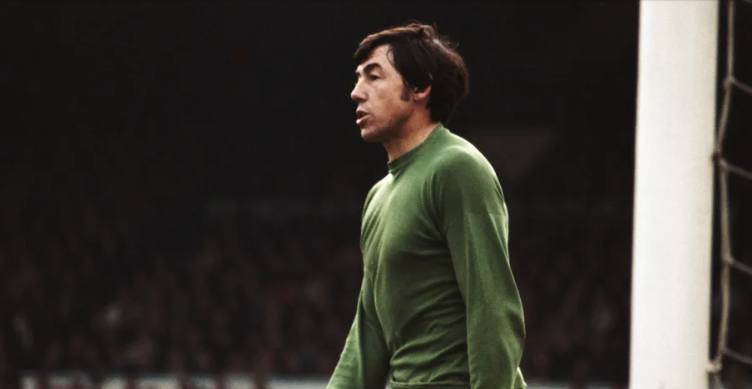 Gordon Banks, the England World Cup winning goalkeeper, passed away, yesterday, aged 81 – but did you know that Banks played at Finn Park just weeks after a legendary save at the 1970 World Cup?

Gordon Banks will be forever remembered for his wonder save from Pelé in the 1970 World Cup.

Four years after helping England to win the 1966 World Cup, Banks denied Brazilian legend Pelé during a group game at the 1970 tournament in Mexico.

That save in Guadalajara is recalled as the ‘greatest ever’ and has been recalled at length since the death of former Chesterfield, Leicester City and Stoke City goalkeeper yesterday.

Just eight weeks later, Banks turned out for Stoke City in a friendly match against Patsy McGowan’s Finn Harps – who were readying themselves for only their second-ever season in senior football.

The presence of the iconic Banks helped draw a crowd of 5,000 to Finn Park for a game won 3-0 by Stoke.

The Donegal Democrat recounted the traffic difficulties of the time as being: “So severe was the pressure on parking space that some car drivers parked on the half-finished proposed park at the Butt Hall, which is not yet open to the public, but which will be a great boon when in operation.”

Jimmy Greenhoff gave Stoke the lead when he latched onto a mistake and hammered home.

It was also Greenhoff who added the second, taking a pass from Mike Bernard before firing past Gerry Murray.

Stoke’s Peter Dobing added a third in the second half.

“Stoke City were simply too good,” was how the Donegal News recalled the game.

“They played the first quarter of an hour at a pace slow enough to suit the Harps, while they sized up the potential of the opposition, and having worked out their tactics and their means of countering every Harps move, they stepped up the pace to score twice within a period of five minutes.”

The Irish Press was impressed by the performance of the Harps goalkeeper, Gerry Murray, noting: “Murray, the Harps keeper, brought off some good saves, including a spectacular dive to hold a shot by Burrows. But Banks, who appeared only for the first half, had little trouble in disposing of the few shots which reached him.

Banks and his Stoke team-mates played a round of golf at Ballybofey & Stranorlar Golf Club during their visit and also spent some time fishing in the area.

The Donegal News noted of Banks’ first-half appearance: “…had a pleasant evening out, and when he did not appear for the second half, it certainly was not exhaustion that kept him in the pavilion.

“The biggest demands on him being when he was on his way to the dressing rooms at the interval and was mobbed by youngsters seeking his autograph.”

In the same edition, there was a bizarre tale from the game, relating to a game across the road at Sean MacCumhaill Park.

“Twice it came over the public address system at Finn Park on Sunday during the Finn Harps v Stoke City meeting: ‘Would MacCumhaills players please report for their GAA game with Na Piarsaigh at MacCumhaill Park’,” the article read.

“Who gave instructions to have the GAA men paged? Was it a joke instigated by the smiles of soccer promoters who are pleased to see the GAA Ban on attendance at soccer games broken? No-one has come up yet with the answer. But the call was not made at the request of the local GAA club. While Harps were being outclassed, the MacCumhaills men might have smiled. They were busy chalking up another substantial Championship win in their own park.”