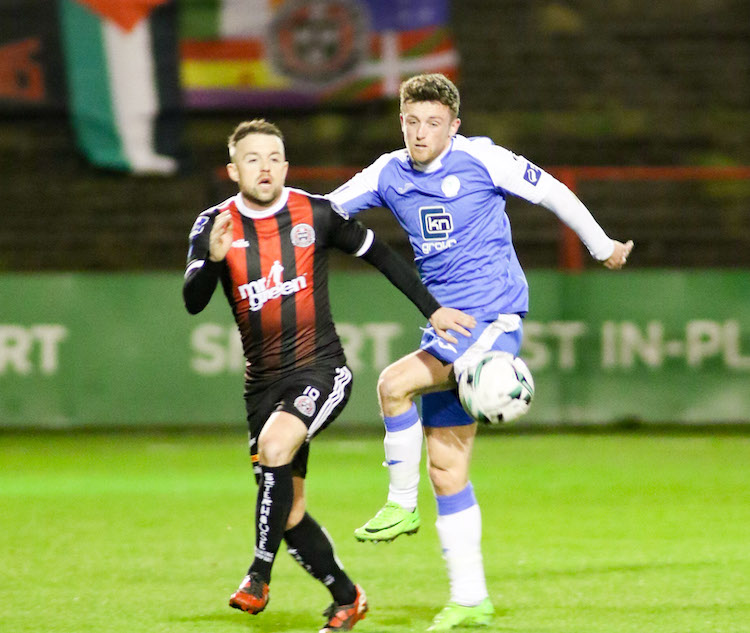 Dinny Corcoran struck the only goal of the game as Finn Harps’ wait for a win at Dalymount Park continues.

Corcoran’s goal, in the 41st minute, was the only separator in front of 2,914 spectators, including Republic of Ireland legend Robbie Keane, at Dalymount Park.

Harps, shy some front-line men, made a decent fist of their first game back in the top flight, without creating too much, but Corcoran’s goal was enough to secure a win for Bohs.

The goal came when Keith Ward’s diagonal ball was turned into the box by Keith Buckley. Having dummied the initial pass from Ward for Buckley, Corcoran was on hand to apply the finish, steering in with the help of the post.

That came just three minutes after Luke Wade-Slater whizzed wide from distance, sending a warning shot across the Harps brows, though Nathan Boyle warmed the palms of the Bohs goalkeeper James Talbot.

It took two brilliant saves from Peter Burke to keep Harps in it early in the second half. 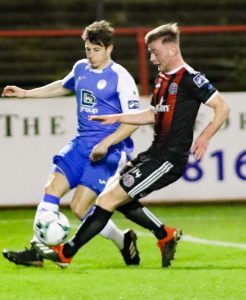 Burke – starting with Ciaran Gallagher unavailable as he is on honeymoon – got down brilliantly to turn away from Danny Mandroiu, who had worked a defence-opening one-two with Keith Ward.

From a Ward corner, Rob Cornwall headed wide while Burke produced a carbon copy of his save, just moments later, to thwart Ward.

It is 20 years ago this week – February 12 1999 to be precise – since Jonathan Speake netted in a 1-0 for Harps that represents their last successful clash against Bohs in Phibsborough.

But Harps were inches from the opener on 20 minutes when Daniel O’Reilly climbed well to head a Gareth Harkin free kick off the base of Talbot’s post. Bohs scrambled clear, but it was a real warning shot for the Gypsies.

Earlier, Caolan McAleer was picked out by a wonderful Raffaele Cretaro pass. McAleer had work to do on the right flank but, after skipping into position, he flashed his attempt past the post. 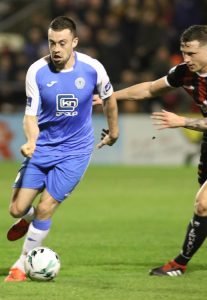 Cretaro and O’Reilly were making their Harps debuts, while McAleer, back at the club following a year at Sligo Rovers, was also included from the off.

Captain Keith Cowan, who is abroad with a group from Coláiste Ailigh, where he works, was also missing while new signing Harry Ascroft was not deemed fit enough to take a place in the squad.

A deflected Ward free was an early wake-up call for Harps after Mandroiu was fouled by Jacob Borg, while Corcoan lacked conviction having been put in by Darragh Leahy.

Burke, as he had done when he replaced the injured Gallagher for last season’s promotion-relegation play-off, stepped up to the plate here. Gallagher’s absence had been kept under wraps pre-match, but Burke showed his credentials here.

Burke made a string of saves after the re-start, parrying from Wade-Slater, who profited from an error by Niall Logue, while goalscorer Corcoan could only blaze over and into the Des Kelly Stand, which housed a decent traveling support for Harps’ Premier return.

Mandroiu drilled over as Bohs went in search of a second while sub Tony McNamee – back at Harps following a spell in the Ulster Senior League – shot into the chest of Talbot.

The welcome back to the top flight is unforgiving: Next up for Harps is a home game against champions Dundalk on Friday night.