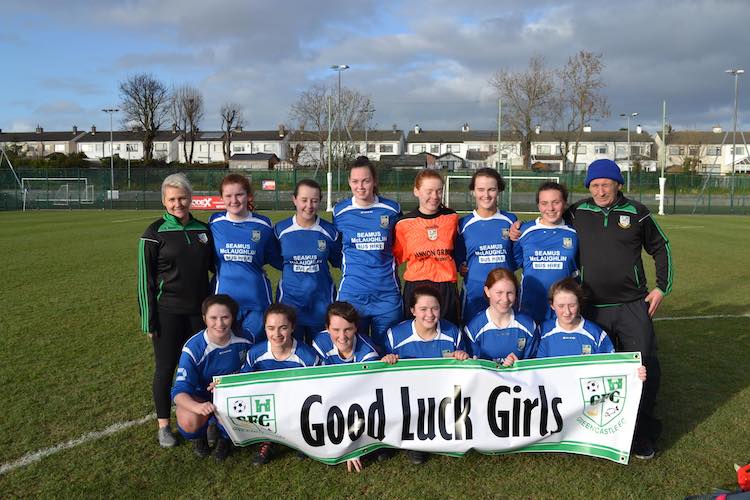 On Sunday 12 girls from Greencastle FC made history at Whitehall as they won the WFAI U18 Cup.

Although out-numbered by the Passage supporters, it was brilliant that it was the travelling Greencastle supporters who were the loudest and it was great to see Dublin based students from Greencastle and Moville attending as well as Greencastle people now living in Dublin.

The game started with Greencastle finding it hard to settle into their sharp pressing and passing game due to playing into a strong breeze and having the strong sun in their eyes.

With Greencastle finding it hard to adapt to these conditions the back four of Connie Price, Aisling McLaughlin, Danielle McLaughlin and Ellen Hegarty rose to the occasion and thwarted everything that Passage threw at them by way of the long ball assisted by the strong wind.

Greencastle created the first clear cut chance on 11 minutes when Megan Havlin put Niamh McDonald in 15 yards out but the brave Passage keeper the Rachel Sheehan came out to save at the feet of McDonald.

Greencastle keeper Georgia Rudden pulled off a stunning save from a 20 yard shot from Passage midfielder Chloe McCarthy on 15 minutes.

This seemed to spark Greencastle into action as the midfield three of Breena Diver, Erin Coyle and Emer Gillen started to dominate with Gillen starting to prompt everything going forward and Coyle and Diver plugging every gap they could.

The first goal arrived on 20 minutes and it was so simple, but showed Greencastle at their best powerful, quick and accurate with three passes through the middle.

Defending a Passage freekick Gillen picked the ball up at the edge of her box played a pass 15 yards to Diver who relayed another 15 yard pass to McDonald who repeated the movement to find Havlin 30 yards out and she powered past two defenders before firing home into the bottom left hand corner – from their penalty area to goal in 12 seconds.

Greencastle were on top now with Kate McClenaghan and Niamh McDonald switching wings they were really stretching Passage with their non-stop running, but their efforts were being denied by the brilliant Passage keeper Rachel Sheehan. Probably the best chance came when McDonald’s exquisite cross field pass to McClenaghan led to McCarthy pulling off a brilliant save from McClenaghan. Greencastle now needed a second to seal their first half dominance. The second arrived when another McDonald cross field pass gave McClenaghan the opportunity to deliver a right wing cross to Havlin who headed home at the near post despite the best efforts of the Passage keeper and was a header that any centre forward would be proud of.

Trailing 2-0 Passage began the second half on the front foot but found the Greencastle back four a hard nut to crack.

Passage forced two quick corners early on but keeper Rudden was in control of her 6 yard box.

In the 65th minute Coyle won the ball in the centre circle passed to Havlin who with her back to goal played a reverse pass to behind the Passage centre halves to McDonald coming in from the right and she advanced into the area, waited for the keeper to commit and slotted home into the bottom left hand corner.

After 70 minutes Fiona McLaughlin replaced Breena Diver and Havlin dropped into the midfield. It was a front three of McClenaghan, McDonald and McLaughlin who were pressing the Passage back line which led to Coyle in 80th minute winning a ball from which she was able to find McDonald 20 yards out who looked up to see McClenaghan’s run and she picked a pass which McClenaghan volleyed home from 10 yards to the delight of all her team mates.

The goal of the match came in the 87th minute when an exchange of passes between McDonald and Coyle released Havlin to deftly lob the keeper from 15 yards.

A brilliant cavalcade was arranged for the Girls’ homecoming but spare a thought for midfield dynamo Emer Gillen who couldn’t travel home for the celebrations as she had to remain in Dublin to continue her studies – but don’t worry there is a big night coming shortly.