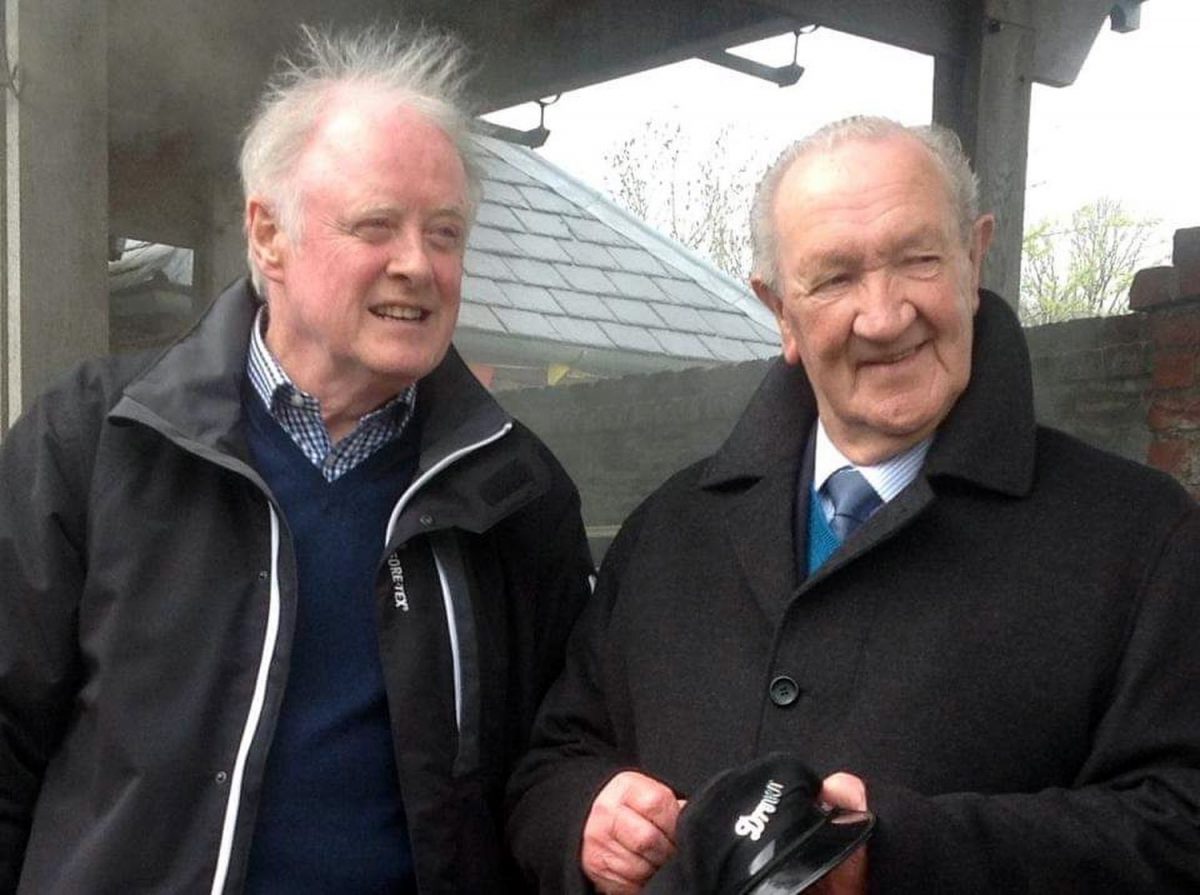 A smart Windsor knot, a warm smile, a friendly wave and a gentle deep voice. That’s how many will remember one of the last of the Donegal Railway drivers, Michael Gallen, also known as ‘Mick’, who sadly passed away last week.

This week, the Ulster Transport museum was buzzing with the arrival of Tim Peake’s Space capsule which landed in the main hall in the transport museum near Belfast.

Sitting quietly in the background not far away is the hand-painted cream over red time capsule from another era that reminds us of travel of a different type in Donegal.

Tim Pikes Space Capsule at the Ulster Transport Museum this week in Belfast parked just across from a CDR Donegal Railcar used by driver like the Late Mick Gallen who passed away this week.

It may be 60 years since the last railway network operated in Co. Donegal but this week with the passing of Mick Gallen (96) the times and memories came steaming back up the line as Donegal bid farewell to one of the last railway drivers.

Mick drove a railcar for the CDR (County Donegal Railway) maybe even the one sitting beside Tim Peake’s Space Capsule in the Ulster Transport Museum.

While the space capsule tells the story of journeys to and from the International  Space  Station. Our CDR railcar was more likely to tell the story of time travel to Strabane Station, or some other station in Donegal where the train went.

Railcars were basically a modified bus on rails. The first of them came into operation as early as the 1920’s and typically were purchased second hand as an engine and chassis costing around £50 at the time.

Then the CDR  brought them to Lifford where a bus body was made by coach builders Doherty’s capable of carrying 40 passengers costing around £250 plus another £100 for wheels and strengthen which had an outlay of around £400.

It was estimated that these railcars could save up to £600 per year in running costs compared to a steam-powered train.

While Lough Swilly Railway had giving up on the transport of passengers by rail in favour of buses on the road the CDR were trying everything to try and keep the passenger numbers online with these railcars.

Mick Gallen worked mostly on the  Strabane to Letterkenny line travelling through Lifford Ballindrat, Raphoe, and Convoy on the way into Letterkenny.

As a child, Brendan Delap. who lived in the Lough Swilly railway Station House in Letterkenny, recalls going into the CDR station next door when he would see Mick Gallen arriving at the platform in his railcar and would go down the line for a spin to the turntable where Mick would turn the railcar around and then back it up to the platform so it would be ready for to go in the morning.

Mick also headed to the seaside on the railcar on ‘specials’ or excursions as they were then called to Rossnowlagh in the summer then on to Ballyshannon where the line ended and drivers and conductors would head down to Dorrian’s Hotel for their tea before heading back to take the day trippers home on packed railcars in the evening.

There was always talk about the CDR closing the railway but even so you would know listening to Mick Gallen talking  about them years on the line he was very proud to work on the railway and even though the machinery was getting very tired he always tried to keep the railcar he was driving well presented just like the way he presented himself.

Mick Gallen at the controls of the train at Oatfield House.

In the late 1950s, a section of track from Ballindrat to Lifford was renewed. Mick recalled that the work was that good that the normal clicking of the wheels from a length of track to track was so even you could hardly hear anything only the sound of the cylinder Gardiner Engine.

The work on the track looked to signal that possibly the Strabane to Letterkenny line was going to be kept in operation but within a year of the new track going down all of the Donegal, railways were closed.

The Late Mick Gallen pictured with Gerry Robinson when he call over to Oakfield House to look at the railway set up in the park.

The last day of 1959 seen the rail network in Donegal closing with the CDR moving their freight and passengers to road transport.

Mick Gallen moved from driving a railcar to a bus on the road and mostly travelled the same route as he did in the rail car from Letterkenny to Strabane going through Glenmaquinn, Convoy, Raphoe, Ballindrat, Lifford and Strabane.

Friday was a big day for shopping in Strabane with the markets on. When we were wanes and couldn’t pronounce Strabane we called it Mister-ban or the ”Ister-ban bus“ and most time it was Mick Gallen who was the driver of this bus as we smuggled our shopping back over the border to Donegal.

Students who received their second level education at The Raphoe Royal Prior and Comprehensive travelled from Letterkenny and Convoy would remember the friendly welcome Mick Gallen would greet them with every morning and afternoon over the many decades he drove the bus for the CDR which was then taken over by CIE.

Parked up the bus

Then 31 years ago on May 8, 1988 Mick drove his bus into Letterkenny Platform for the last time when he finally retired from the service.

That familiar smile at the wheel of his bus Mick Gallen pictured on his last day in 1988 when he retired from the bus service pictured arriving into Letterkenny Bus Station for the last Time.

If you lived in Glencar or went to St. Eunans College, Gallen’s shop was a big part of your life. That’s where I first met Mick Gallen behind the counter giving a hand serving in the family shop.

“How’s young McDaid” would be typical of a greeting from this gentleman. He would be the one you would hope would appear through the multicoloured privacy blinds that divided the shop from the family home, especially on the days that you were sent to the shop without any money hoping  to get the messages on “tick” to the end of the week when the bill would be squared up.

Mick Gallen, behind the wheel of a bus, railcar, or behind the counter in a shop, gave young people, some of whom lived in difficult times, a great encouragement to believe in themselves and had the quality of being prepared to treat a person young or old as an equal.

Mick Gallen will be sadly missed by his family and friends that had the pleasure of knowing him over his long lifetime.

May he Rest In Peace