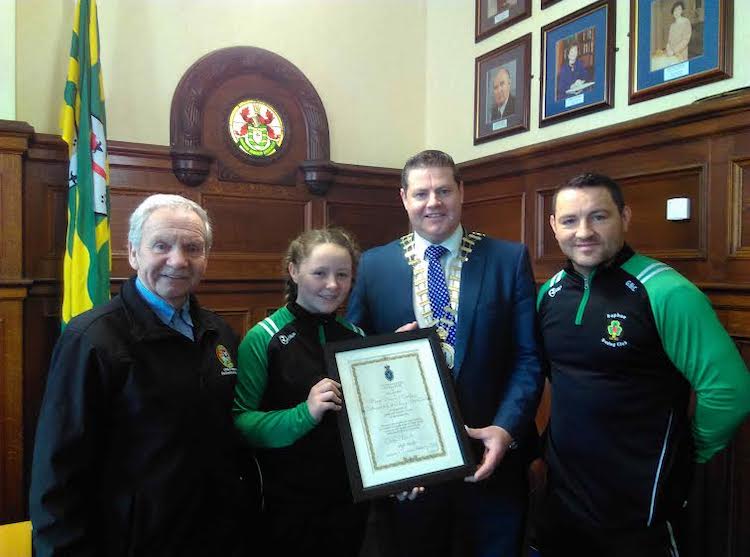 Members of the Raphoe Boxing Club presented presented Cathaoirleach of Donegal County Council Cllr. Seamus O’Domhnaill with a gift on behalf of the High Sheriff of Worcestershire Cassian Roberts.

This scroll was presented to Peter O’Donnell as President of the Donegal Boxing Board when he led a delegation of14 boxers and 6 coaches to Birmingham at the end of January.

The club spent four days in Birmingham where they took part in a major tournament in the Holte Suite at Villa Park, home of Aston Villa FC.

The opposition came from with The Paddy Brennan Boxing Academy and The Second City Boxing Club under the watch of Paddy Farrell.

The Paddy Brennan Boxing Academy’s founder Martin Paddy Brennan has strong family connections with Donegal as his father is originally from Lifford.

The academy received an MBE for volunteer groups in 2015 for helping more than 2,000 young people.

Cathaoirleach of Donegal County Council Cllr. Seamus O’Domhnaill congratulated Peter O’Donnell and his team for their ongoing commitment to the promotion of Donegal boxing and the strong positive relationships that he and his team are building within boxing communities around the world.

“It is an honour to receive this gift on behalf of the county. Peter and his team are wonderful ambassadors for Donegal.

“This gift is a great recognition of the amazing work and commitment that Peter and his team are doing in Donegal and beyond that offers young people an opportunity to stay focused, build their confidence, experience new people and places and through these types of events develop strong relationships between other boxing communities building a positive reputation for our county.”

Now is the perfect time to recycle...

Libraries in Donegal re-open on a phased...

Lifeguards to return to Donegal beaches this...