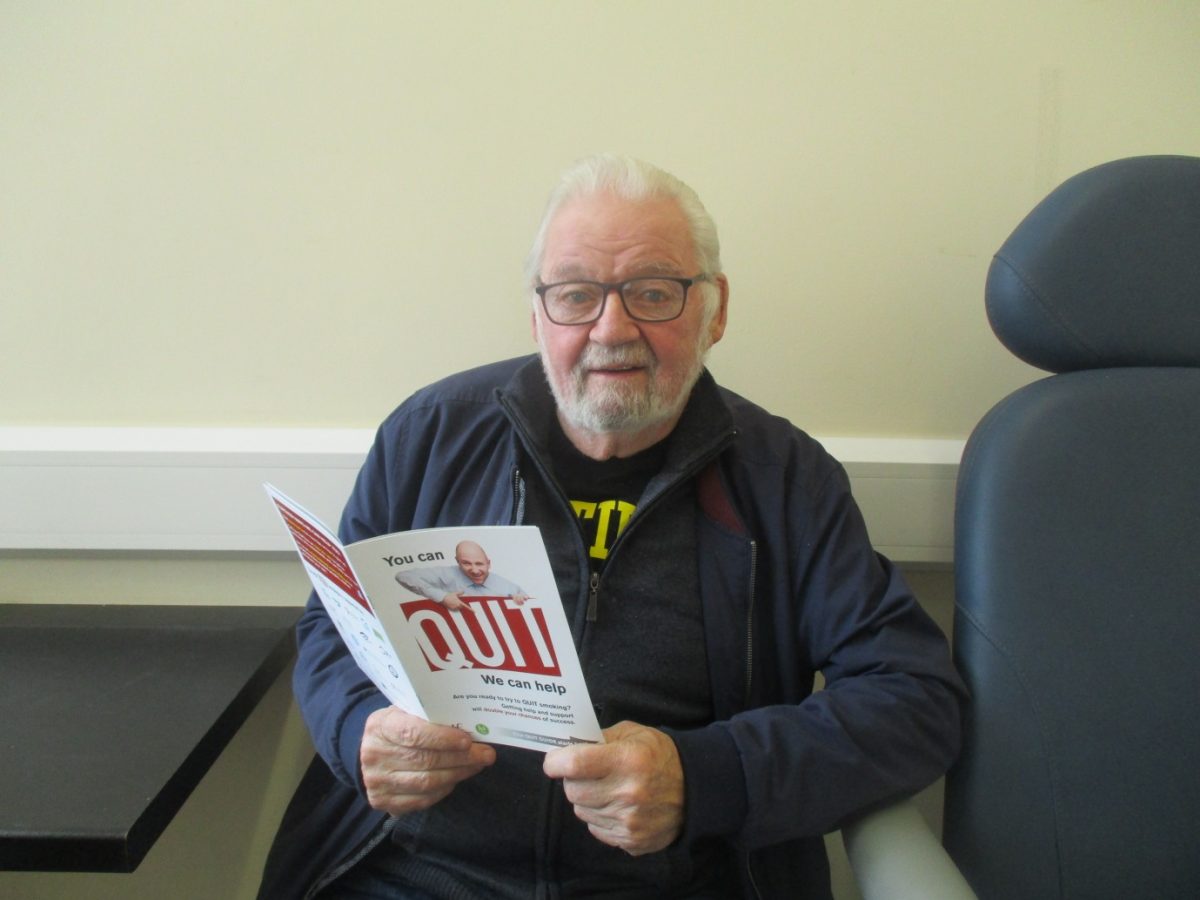 IMAGINE how much healthier John Lennon is after quitting cigarettes after 60 years!

A Scottish man who has made Donegal his home is celebrating after marking one full year off cigarettes after puffing away for more than six decades.

A very happy John Lennon met with his HSE Tobacco Cessation Advisor Fiona Boyle again last week and he is over the moon to be coming up to his first-anniversary of being tobacco-free.

John first started smoking cigarettes when he was about 14 years old and has used tobacco for over 60 years.

He bought a 5 pack as a child and then elevated to using between 50 and 60 cigarettes per day as an adult.

John used to enjoy it and felt it helped him concentrate, preventing boredom with his job as a long distance lorry driver and especially on the night shift trunking between 3am and 6am.

However, he is now convinced that the cigarettes were a major part of his recent ill health and is determined to stay off the cigarettes.

John was born in Scotland and retired to Ireland in 2000 as his wife Mary is from Mullagghduff in Donegal.

In 2017 life changed for John when he had four admissions to Letterkenny University Hospital as he was having difficulty breathing and the ambulance and NoWDOC service had to be called.

He was terrified as he felt every breath was going to be his last. On his third admission however, after a few days he was bored and bummed a cigarette from another patient. John didn’t think that his breathing problems had anything to do with his cigarettes.

He had worked in a cement factory for 10 years and also was a miner for 3 years which he felt caused his problems. However, now he is convinced that the cigarettes were a major part of his breathing problems especially as he smoked so many.

When John was discharged he was embarrassed that he couldn’t breathe properly and would stay in the house and wouldn’t leave. His independence was gone and he was finding it hard to find reasons to carry on. He felt he was losing control and was depressed.

However, his GP then referred him to the Respiratory Integrated Care programme at Dungloe Community Hospital. He was met by Tara, who is a physiotherapist and Antoinette, who is a respiratory nurse. They interviewed John and carried out a walking test. John found this programme brilliant as he knew the Tara and Antoinette could help and he enjoyed attending every week.

He was asked would he be interested in seeing Fiona, the tobacco cessation nurse and he agreed. This was mainly out of curiosity to see what it was about. He went with an open mind to try it with no expectations. At the end of the appointment, he couldn’t wait to get out and have a cigarette but Fiona offered him another appointment and John is the kind of person that always keeps appointments.

He did want to quit but he wasn’t sure if he was able to do it. He had 3 appointments in total before his quit date on 18th March. He initially used a drug called Champix which he wasn’t able to stay on as it made him feel sick and then he started using the patch and Quick mist.

That was last February and John decided to quit on 18th March and has been tobacco-free since. He comments that the most difficult part was actually making the decision to quit and that it hasn’t been as hard as he thought it would be.

Checking in monthly with Fiona now, is helping and since quitting he has noticed the following benefits: better breathing, taking less medication, feel better, able to do more and is now never out of his shed doing things, not depressed as his moods are much better and he has more interest in doing things as he has the breath for it.

John’s advice to others is that if you get the chance, do both the Respiratory Integrated Care programme and the Tobacco Cessation programme together as they are related and help each other. He is very determined to remain quit now as he doesn’t want to experience the shortness of breath again. He knows he was heading down the road of having to use oxygen and any time he has a rare notion of a cigarette he remembers the ambulance and fighting for breath.

If this story has inspired you and you are interested in quitting tobacco, especially now with Lent coming up, then call Fiona on Tel: 087 2514 790 for information on any of the 13 free Smoking Cessation Clinics in Donegal or contact the QUITline on 1800 201 203.