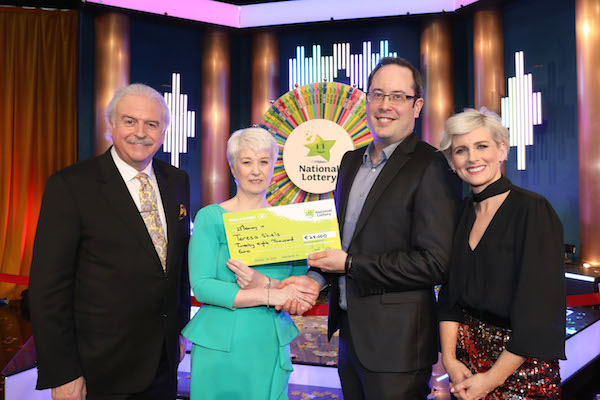 Three-sy does it! Another Donegal player to appear on RTE’s Winning Streak

They say that good things come in ‘threes.’

That must be the case when it comes to Donegal players appearing on the lotto TV gameshow Winning Streak.

Because for the third week in succession a Donegal player is to appear on the show.

Next Saturday night is the turn of Pauric Collum from Redcastle to try his luck on the show.

Last weekend Teresa Shiels, from Letterkenny, walked away with €28,000 from the show.

And before Teresa was the turn of Killygordon man Gerard Muldoon to appear on the show.

Teresa has been married to Charlie for the past 31 years and the couple have two adult children, John and Lisa. Teresa is also a proud grandmother to little Leah who watched from home.

Her family, including her mum, Marie – a long time Winning Streak fan, and her three brothers John, Jim and Martin were there to support her from the audience.

Teresa works as a receptionist for Ballyraine Park Health Centre in Letterkenny and her favourite pastime is walking.

She hasn’t made any plans for her win just yet and will wait for dust to settle after her TV appearance.

Three-sy does it! Another Donegal player to appear on RTE’s Winning Streak was last modified: February 27th, 2019 by Stephen