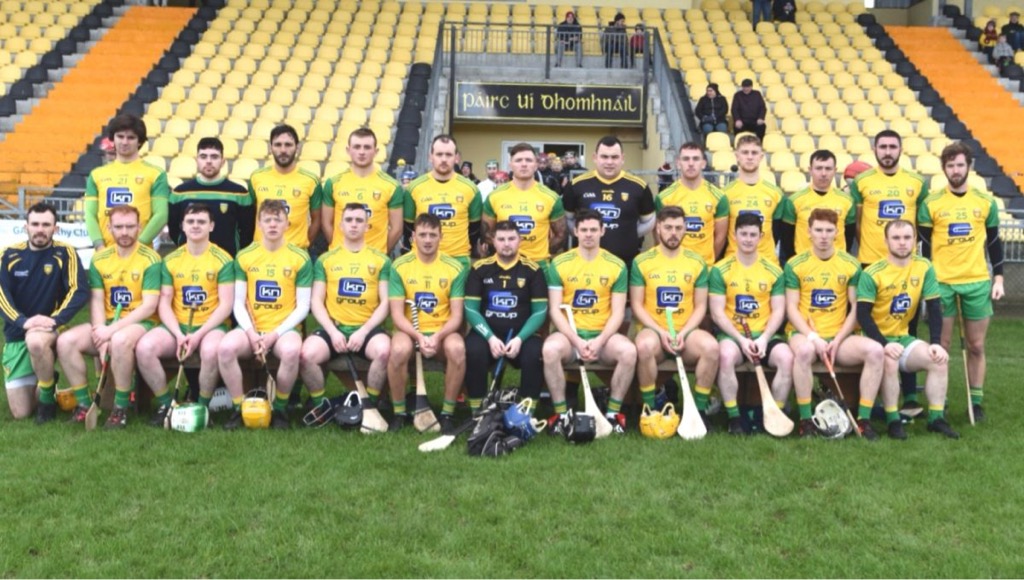 Donegal Hurlers have easy victory but play-off test to come next week.

Donegal 5-18 V 0-17 Warwickshire. Both teams started without a number of regulars with next week’s relegation play-off in mind. After the wind and rain of Saturday night in Ballybofey playing conditions were perfect at O Donnell Park. Paddy Hannigan gave Donegal the lead after 30 seconds but John Collins replied with two quick frees for Warwickshire . In the seventh minute Hannigan made life difficult for full-back Dean Bruen and Kevin Kealy pounced to slam the ball to the net despite the best efforts of keeper Phil Crean , 1-01 to 0-02. Collins pointed from play to leave a point in it but Donegal then hit three in a row from Lee Henderson ( free ), and two from play by Ronan McDermott and Oisín Rooney after fifteen minutes. Lee Henderson’s free in the ninthteen minutes put Donegal five ahead and Ronan McDermott’s second from play made it a six point game in the 23rd minute. Kevin Kealy added a point two minutes later and then after collecting a long ball forward set-up Paddy Hannigan for Donegal’s second goal. Keeper Crean made a super save to deny his first effort but Hannigan persisted to drill home at the second attempt and a 2-07 to 0-03 lead for Donegal. Ciaran Finn added a point and then Kevin Kealy produced a moment of great skill, collecting a long ball before turning and cracking a brillant drive into the far top corner of the net. Ian Dwyer got a fourth point for the visitors but Lee Henderson ended the first-half scoring with his third point from a free to leave Donegal in control at the break 3-09 to 0-04 ahead. Charlie Collins was in O Donnell Park. John Collins got his fourth point in the opening minute of the second-half for the visitors but Donegal replied with Ciaran Mathewson and Oisín Rooney points and then a goal and a point from play by Lee Henderson made it 4-12 to 0-05 to the home team. Collins got his fifth for Warwickshire but Donegal sub Ryan Hilferty replied with his first touch. Ronan McDermott ran through to drill home Donegal’s fifth goal and Henderson converted another free before Warwickshire hit a purple patch of six points in a row , John Collins scored five of them with Ian Dwyer getting the other to make it 5-14 to 0-11 in Donegal’s favour . Henderson and Hannigan points stopped the mini comeback with points for play before John Collins scored his 11th point from another free. The teams exchanged points in the final quarter as Donegal ran out winners by 5-18 to 0-17 but it’s next week’s play-off result that will really count and both teams will be well aware of that. DONEGAL ; Paul Burns , Mark Callaghan , Christopher McDermott , Conor Parke , Jack O Loughlin , P J McCarron , Ciaran Mathewson ( 0-01 ), Ciaran Finn ( 0-01 ), Joe Boyle , Dillon Duffy , Oisín Rooney ( 0-02 ), Ronan McDermott ( 1-02 ) , Lee Henderson ( 1-06 ), Paddy Hannigan ( 1-03 ), Kevin Kealy ( 2-01 ). SUBS ; Colm Flood and Gavin Browne for Finn and Duffy ( both half-time ) , Caolan McDermott and Ryan Hilferty ( 0-01 )for Mathewson and O Loughlin ( both 40mins ) , Jamie DeWard ( 0-01 ), for Kealy ( 45mins ). WARWICKSHIRE ; Phil Crean , Michael O Regan , Dean Bruen , Fintan White , John Collins ( 0-12 ), Peadar Scally , Ronan O Donoghue , Tom Kelly , Daire King , Robert Curley , Darren O Neill , Kelvin Magee , Joe McDermott , Ian Dwyer ( 0-05 ), Ciaran Boyle . REFEREE ; James Clarke ( Cavan ).

Donegal Hurlers have easy victory but play-off test to come next week. was last modified: March 3rd, 2019 by Chris McNulty