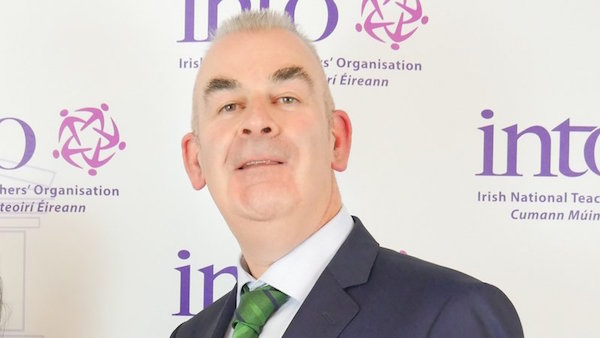 Donegal’s new INTO General Secretary Designate John Boyle is preparing for his first day in office.

He will formally take over from outgoing Secretary General Sheila Nunan later in the year.

John stepped down from his role as principal of St Colmcille’s in Knocklyon on Friday, following an eighteen-year career in the school as he prepares to assume the running of the Irish National Teachers’ Union.

INTO General Secretary Sheila Nunan said “Following his resignation on Friday, John will take up office in INTO Head Office and the transition process will enter its final stage. The staff and I look forward to working with John to deliver a smooth handover.”

“It has been the honour of a lifetime to lead this union over the past decade. Whilst we faced perilous and often grave economic challenges, I am proud that we stood firm against the worst excesses of austerity-era government policy.

“Now that the country has recovered, we must lead the fight to end pay inequality for our newer entrants, we must stand up for our stretched school leaders and demand the investment in education necessworld-classver a world class education for our young.”

INTO General Secretary Designate John Boyle said “As I say farewell to my school colleagues and pupils, I am looking forward to my new role as General Secretary of the INTO. I will be relying on Sheila’s counsel over the coming months as I prepare to take on this important role at a critical moment for our members.”

“I will bring a clear vision for INTO over the coming decade, we will be bold and ambitious in demanding the level of investment our education system, both here in the Republic and Northern Ireland, needs. We will remove inequalities that currently exist and give every teacher and pupil the room to bloom.”