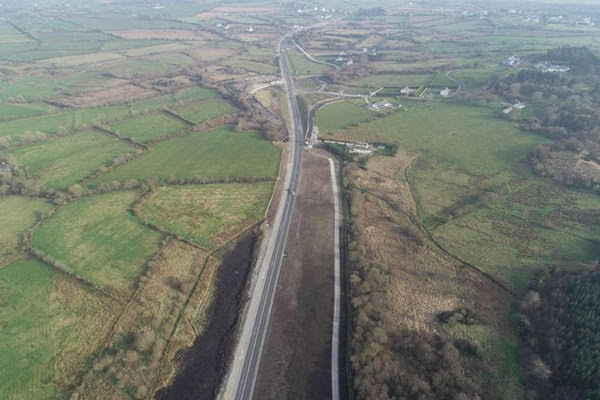 €19M works on notorious Blue Banks to be finished by Easter

Minister for Education and Skills Joe McHugh has confirmed that the €19million road upgrade works on the N56 near Kilmacrennan are on course to finish ahead of schedule.

The works have tested the patience of drivers in recent weeks with long delays as the works continue.

But it’s all set for the greater good as the works look set to be complete by Easter.

“The €19 million upgrade work on the N56 along the Blue Banks has been a big success for the county,” Minister McHugh said.

“It has delivered way more than was originally expected. We have the water supply running alongside it and we have the greenway. Now we have the project running ahead of schedule.

“And from a safety point of view, as well as for comfort and for better travelling, this project is a shining example of this Government’s investment in infrastructure and getting a job well done, and ahead of time.

“I’d like to thank Michael Nolan of Transport Infrastructure Ireland (TII) and all the construction crews and designers who have been involved in this project from day one.”

The Minister said: “The photos of the work tell their own story. You get any idea of the scale of the project and the quality of the road.

“It’s an impressive sight and another symbol of the great investment in our county.”

Minsiter McHugh said: “The brilliant news of schedule busting work on the N56 is also coming when the Government is spending another €34million on projects on the main roads in Donegal this year.

“While the main road along Blue Banks is being completed by Easter, the crews will be on site working on the minor link road to bring the whole stretch to top class standard.”

Minister McHugh said: “We have 17km of new improvement works on the N56 from Dungloe to Cloughbolie and Letterilly to Kilraine. We’ve the crews ploughing ahead with work further south near Mountcharles and Inver, also on course to finish this year.”

The Minister also noted progress on the greenway alongside the N56 Blue Banks project.

“I’ve always believed that this stretch of cycleway and footpath along the road was another piece in the jigsaw to connect Derry City to Inishowen and Letterkenny and Glenveagh and the Gaeltacht islands with a dedicated tourist and leisure trail,” Minister McHugh said.

“It is a big idea but achievable and it would make a massive difference to the region, attracting people from across Ireland, Europe and further afield.”