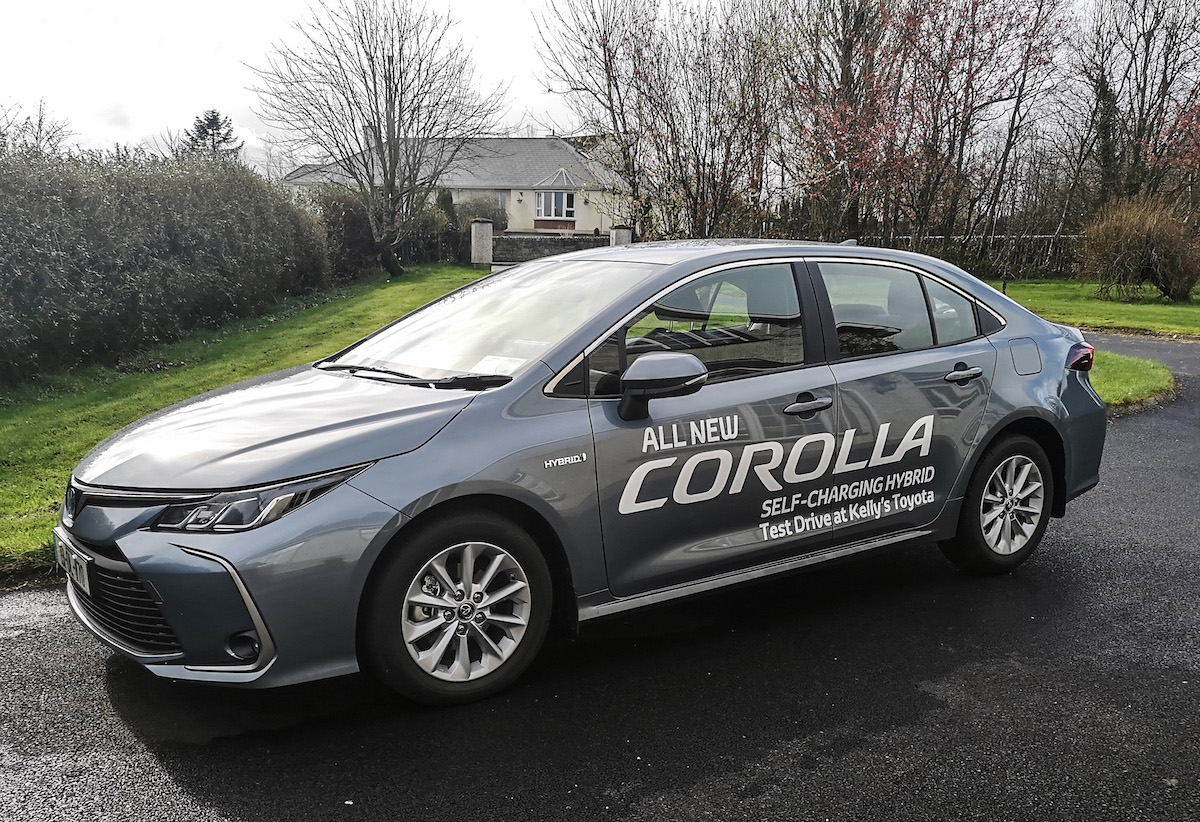 This week Donegal Daily’s motoring columnist Brian McDaid was out in two versions of the all-new Toyota Corolla both hybrid, a hatchback, and a saloon.

In a time where everyone is looking and demanding the smallest carbon footprint, this new Corolla Hybrid may have the biggest shoes to fill.

We had the new hatchback and the new saloon out on the road this week, both based on the same platform but geared at very different markets.

No one likes change especially when something works well and that has been the case with Corollas over the years.

I know, I had three of them and racked up big miles on all them and they never gave any bother.

Now car buyers are being guided towards low emissions and away from diesel and have to look towards a different type of car.

Toyota and the worlds best ever selling car, the humble Corolla, has evolved yet again, this time 53 years on since it was introduced in 1966.

Now it’s back as a hybrid.

If that wasn’t a big enough transition the Saloon is also a replacement for the old Carina or Avensis range which has faded from the Toyota range.

Ahead of the game

Toyota has been the leaders in the development of hybrid family cars for over twenty years and that development is now at a stage now with the launch of the new Corolla that you could be mistaken for thinking that these new hybrids are not hybrids at all.

The new Corolla Saloon, which was my choice, looks like an ordinary car on the road if you didn’t spot the small blue badge on the boot lid.

It just looks like a normal four-door family saloon plus the fact that the petrol engine is that quiet now compared to diesel, it’s very hard to tell when you are running on the petrol engine or on the electric motor.

After a while behind the wheel, you will realise that this fact doesn’t matter to you because these cars are more efficient at making decisions, so you really don’t have to worry about it.

I had the Corolla Sport Hatchback out for a morning and was managing 4.2L/100Km on a long run and that evening.

I was stuck in traffic around Letterkenny in Corolla Luna Saloon which was just perfect for the purpose over heavy urban driving and was getting 4.5L/100Km

I know these were short term fuel tests but they were good indications of what this 1.8 Petrol/ battery powered car is capable of doing.

The hatchback probably drew the most attention which was in white a black roof and beautiful sports rims and had more of a sports theme with red piping around the dash and a nice sportive bucket seat.

All information on both cars is displayed on a big screen in the middle of the dash, and again there is very little to tell you that you are in a hybrid when you are driving this car.

If you want, you can go in and display a visual on where that car is receiving the power from being it battery, engine or both or when you are going downhill it shows the car harvesting power from the road wheels to recharge the battery.

At a launch of the New Corolla Hybrid, a guest who is already driving a Hybrid Yaris described to me over coffee and canapés what it was like to drive these new cars.

“Once you sit behind the wheel of one of these hybrid yokes, that’s you f####d.”

What I think they were trying to say was how easy to was to drive these new cars which all have automatic gearboxes and the fact that these would spoil you and would never settle for driving a car with a manual gearbox again.

And for me, this is the benefit of driving these new hybrid automatic gearboxs, which are silky smooth

Gone are the days of hybrids and automatics only serving the needs of one driver type. Slow, Noisy and sore on fuel they are not.

The new two-litre Corolla Hybrid which is on the way soon to Ireland will put many the hot hatches to shame with 0-100kms in 7.9 seconds. and yet will match any diesel on miles per gallon but most importantly it will do it quietly will satisfy the emissions requirements.

But only getting out and in behind the wheel of a hybrid will really give you the benefit of how good this new Corolla feels on the road. In the meantime, I want to end on a story from over 40 years ago which gave automatics the brand some still think they are.

My earliest memories of automatic cars was of an Allegro Vanden Plas which belonged to a cook from India who came to Letterkenny to work in the old Centre Spot Cafe at the Market Square, Bal always wore his long white chef coat everywhere he went.

He had an infectious personality and all of Letterkenny knew Bal.

An Automatic Allegro Vanden Plas like Bal’s. A familiar sight and sound around Letterkenny many years ago.

The mustard coloured Vanden Plas had a Rolls Royce Type grill, massive chrome hubcaps, leather seats and a walnut dash and of course its unique sounding three-speed automatic gearbox which meant you could head Bal’s car long before you could see it as he would head up the Church Lane and in the narrow gateway where I worked as a mechanic to Danny Caddye’s Garage.

Hello, Mr. Danny was always the joyful greeting that Bal would give as he presented his rare looking family car for another bit of running repair.

For you that are wondering what this car from nearly 40 years ago has to do with hybrid motoring of today the answer is absolutely nothing except for the fact it’s an automatic, which is nothing like the automatic gearboxes that come in any hybrid.

But automatic cars from yesteryear like Bal’s Allegro stick in people’s mind and drivers of manual gearbox powered cars still think or believe that automatics have never changed but how wrong and out of touch they could be.