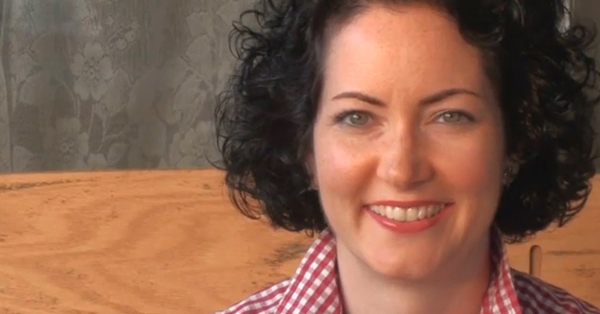 Irish-American Tara O’Grady has released a new book of tales from an adventurous road trip combined with fond memories of family in Donegal.

Tara, the daughter of a Donegal woman, is a New York-based jazz singer and author who was inspired to follow in her late grandmother’s footsteps on a soul-searching trip across the States.

Tara’s journey began in 2011 when she was laid off from her office job and suddenly had all the time in the world to travel.

She had always wanted to go on a great American road trip, following the same route that her daring grandmother took in a pink Chevy in 1957. With the help of Chevrolet, Tara was able to make the same 3,000 mile trip and document the adventures for her new novel, Migrating Toward Happiness.

Tara is a Queens woman who will always think of Donegal as her Irish home. Her mother Mary Connaghan left her Mountcharles homeland at the age of 17 and took the boat to New York. She settled down with a Bronx-born Irish man Tom O’Grady, but the family always came back to Inver in the summertime.

While Tara’s ‘Donegal granny’ Nora Gallagher remains in her heart in many ways, it was her other ‘Waterford granny’ Catherine O’Donnell whose independence spurred her on the Chevy journey.

Catherine was a woman ahead of her time. This was defined by her 3,000-mile solo journey from New York to Seattle.

Tara said: “My grandfather forbade her from getting a driving licence. He told her she could walk anywhere she needed to go.

“But one Easter he went home to Roscommon on the boat. In those weeks he was away, my grandmother asked his coworkers to teach her how to drive. When he came back she told him: ‘I can drive now, I have a licence, I’m taking the car and I’m going off on this adventure’.

“So he stayed in the kitchen, which was very rare. No woman would even dare leave her husband in the 1950s to cook for himself.”

Catherine, with her two kids in tow, travelled across America in seven weeks to visit her brother in law in Washington. When Tara regaled this story to Chevrolet on the year of their 100th anniversary in 2011, they were so amazed that they loaned her a Silverado for three weeks.

Taking a breath of fresh air from her old office job, Tara and her co-pilot Lauren ventured across the States, all the while discovering that the American dream was still alive. They dubbed themselves Thelma and Louise, but instead of finding Brad Pitt lookalikes they found the meaning of life, which Tara said was so much better.

The book details to duo’s road trip adventures alongside Tara’s flashbacks to rural life in Donegal.

Tara said: “I have so many delicious memories of my summers in Donegal. Of being this country kid in the summer and city kid in the winter. Those parallel universes balanced me. Sometimes it’s hard to live in New York there are so many distractions. I feel connected when I live in Donegal. It’s peaceful and you can breathe.”

Tara has previously held the title of New York Mary from Dungloe and performed at the 50th anniversary of the festival in 2017.

Stories of family, music and spiritual connections to her grandmothers are interwoven into Tara’s journey, which eventually set her on an entirely new path into music.

She is now a full-time jazz and blues singer leading a band in Manhattan with five recorded albums to her name.

Music was always a part of Tara’s life, as it was inspired by her Granny Nora who always sang in her Donegal kitchen.

“Music was in me but I wasn’t pursuing it before. After I got laid off I had to sing for my supper, because literally if I didn’t sing in a pub or restaurant I didn’t eat,” she said.

Tara O’Grady with her ‘Donegal granny’ – the late Nora Gallagher

Tara used her Irish background to develop her own unique style of music. Her dad Tom O’Grady is a traditional fiddle player while her brother Tom studied jazz in university. Tara’s party piece was always singing.

“I would take Irish songs and swing them in the style of jazz music. I sang in the voice of Billie Holiday, who I felt really connected to,” she said.

“If you put all your energy into one thing, obviously something is going to come out of it. I focused on creating music and making people happy with my songs. It was a lot of hard work and I struggled for a long time.

“But it was meant to be. I’m now letting the universe guide me and I’m constantly guided by my grannies.”

Tara hopes that, through her books and her music, she can inspire other people to go out and find their soul purpose in life.

“There are so many people suffering from depression and anxiety. In my books, I want to help them by sharing my experiences and how they can actually be living the life they are meant to. I have found pure joy and I want to share that.”

Tara is planning a return trip to Donegal this June for a book launch, with details to be announced on her website: www.taraogradymusic.com

‘Window of opportunity’ for Donegal Gaeltacht to...