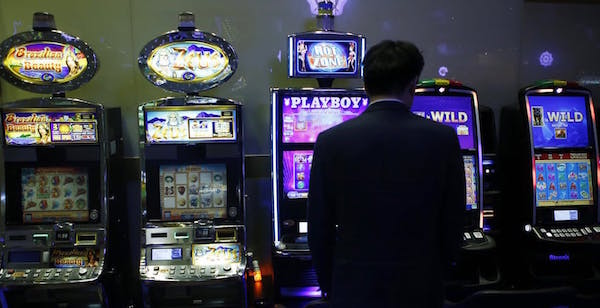 An Inishowen man who claims his gambling addiction cost him his family and his career has slammed local councillors for voting for gaming machines to be legalised on the peninsula.

The man, who hails from Moville but who asked not to be identified, spoke to Donegal Daily today about his fury at the decision.

Councillors on the Inishowen Municipal Authority voted by five votes to four to legalise the machines.

But the man who contacted us said that the councillors who voted to bring in the gaming machines do not realise the damage they have done.

He said “It’s just pure greed and I simply do not know what these councillors were thinking of. These gaming arcades do not create employment worth talking about.

“And I can tell you from first-hand experience that they will destroy many lives. They destroyed mine.

“I lost my wife, my kids and my job because I simply could not pass my their door. I ended up going to Derry to gamble my wages every week and then I lost my job because I was spending some much time in there.”

The man said he wanted to challenge each and every councillor who voted for the legalisation of the machines to state why they thought it was a good idea to do so.

“I want them to explain their reasons behind their decision. Why did they vote to introduce these machines across the entire peninsula?

“It certainly won’t create jobs and the only people I can see getting richer is the people who own these gaming arcades,” he said.

The man, who has now attended Gamblers Anonymous for more than ten years, said today is a dark day for Donegal.

“I honestly thought we had gone beyond this. I thought we were living in a society which looked after their own. I thought Donegal was different.

“These councillors have no compassion, they couldn’t have. If they knew the agony myself and so many others have gone through because of gambling, they would not have voted to allow these machines to be legal across Inishowen.

“I lost the woman I loved since I was a teenager. I rarely see my kids and I lost a good job and it was all because I had an addiction, a sickness caused by gambling.

I’m just so frustrated, annoyed and angry at what these five councillors who claim to represent the people of Inishowen have done,” he said.