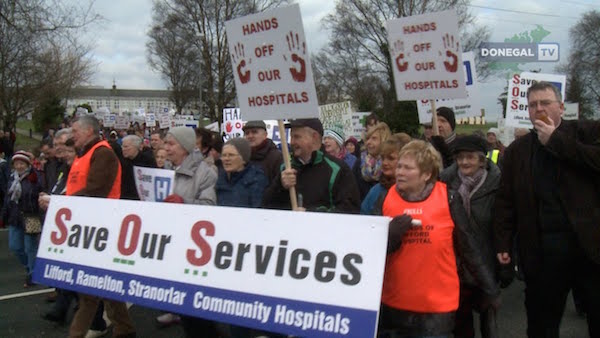 A leading community campaigner is urging people to take to the street of the Twin Towns to protest over the future of St Joseph’s Hospital.

Fr John Joe Duffy says the public has been fed lie after lie about the future of the facility.

And the priest, who is chairperson of the Save Our St Joesph’s Hospital Action Group, has urged people to take to the streets of Ballybofey on March 23rd next.

He asked It is worth recalling that 3 years ago in 2016, we rallied in massive numbers to do exactly the very same thing. So what has happened in the intervening 37 months since our last march?

“Many promises made to us by the Government and each and everyone of them broken, grants announced by Ministers only to subsequently be discovered to be fake news, agreements reached with us only to be found out as time buying efforts by Government in an effort to quieten and calm us down.

“Cynical on our part you might say, No I retort, we are exhausted of the nonsense of this Government, it’s various Ministers who have intentionally mislead us in order to save their own bacon in the sort term.”

He claimed the HSE spent many months ducking and diving until they reached a magic formula of words that nearly convinced us that they had reached a solution for us, that an agreed plan was in place backed up with funding until again we discovered it was a false dawn.

He said the HSE have thrown their lot in with a Government cover-up, a further attempt in saving their own bacon and hiding the truth – misleading the general public by using the various arms of state to tramp down the ordinary people.

“The time has come that we the people must rise and tackle the injustices and arrogance of this Government along with their hapless puppets in the HSE.

“We demand that our Hospital, it’s residential nursing unit, is maintained and investment is made to bring it to the standards that will future proof it for generations to come. We want care for our loved ones within our community, and nothing is going to stop us this time.

“The lies have been tried and failed miserably to convince us. Those who peddled them were tested by us as a people and they have failed and rejected by the people. We will sustain our campaign this time till the end,” he added.

He added that for the sake of those who depend on us to care for them – take to the streets on the 23rd March at 1.30pm from St Joseph’s Hospital and meet in Jacksons hotel at 2.30pm.

“Rally for those who in their time cared for us… give one hour of your time in order our Community Hospital, our Community Residential Nursing Unit. The time for the arrogance to end and the time has come to stand with the people.

“We are asking everyone to come out and support our elderly and most vulnerable.”