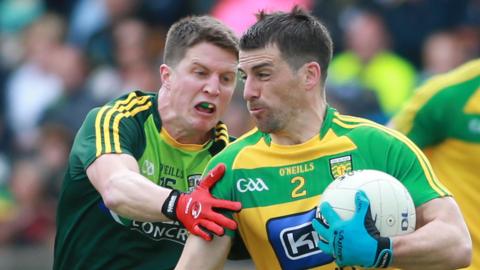 Paddy McGrath is likely to make his 100th Donegal appearance tomorrow in Pairc Ui Rinn with the Division 2 game against Cork also expected to see the return of Neil McGee.

McGrath and McGee, two members of the 2012 All-Ireland-winning full-back line, have 270 Donegal appearances between them.

With Donegal having been shaky at times over the past month, manager Declan Bonner is set to turn to experience.

McGrath was poised for a return earlier in the campaign, but an injury set-back has kept him watching.

However, the Ardara man is set to get back in the reckoning and is tipped to feature on Leeside and join the 100 Club.

McGee was club-tied with Gaoth Dobhair but is back in the county panel following their exit from the All-Ireland club race. McGee is closing in on Colm McFadden’s all-time appearances record and is just two behind.

“We have all these lads back now and ready for action,” Bonner told Donegal Daily/Donegal Sport Hub.

“They don’t have the game time built up yet and it will take time for that. They’ve got a couple of good weeks of training done and they’ll definitely be in the mix.”

After defeats to Tipperary and Fermanagh, Donegal got back to winning ways with a narrow win over Armagh a fortnight ago in Ballybofey. The appearance of Michael Murphy, as a substitute late in the first half, was vital as Donegal took the win.

“We all know the quality that Michael brings to the table,” Bonner said,

“The leadership ability is so important for us. He was training hard to get back and he did very well when he came on against Armagh.”

Bonner also name-checked Leo McLoone, who had a big game in the win over the Orchard.

Donegal scraped to victory in horrendous conditions and Bonner felt it was a night that ought to have been more comfortable for his men.

Having spurned a chance to go five points up, Donegal were left clinging on.

Bonner said: “The one downside is that we didn’t finish the game out in the last ten minutes. We missed the chance to go five ahead and, all of a sudden, they got a couple of scores. For 60 minutes we were in control, but we have to play for 70 minutes.

“If we get the performance levels we know that we have then we’re in with a chance.

“Cork won’t be easy and Donegal have always found it difficult in Cork, but we’re going down looking for the win.”

Gaoth Dobhair’s Daire Ó Baoill, another who has previously been unavailable due to club commitments, will be back in the squad this weekend, while Bonner has paid tribute to the now-departed Martin McElhinney.

St Michael’s man McElhinney made his 100th appearance for Donegal in the McKenna Cup win over Cavan in January. In all, he played 104 times for Donegal, but has decided to end his involvement with the squad.

Bonner said: “Martin has a young family now and the commitment levels are huge. He has opted out and he has wished the squad all the best. He gave ten or 12 great years to Donegal football.”