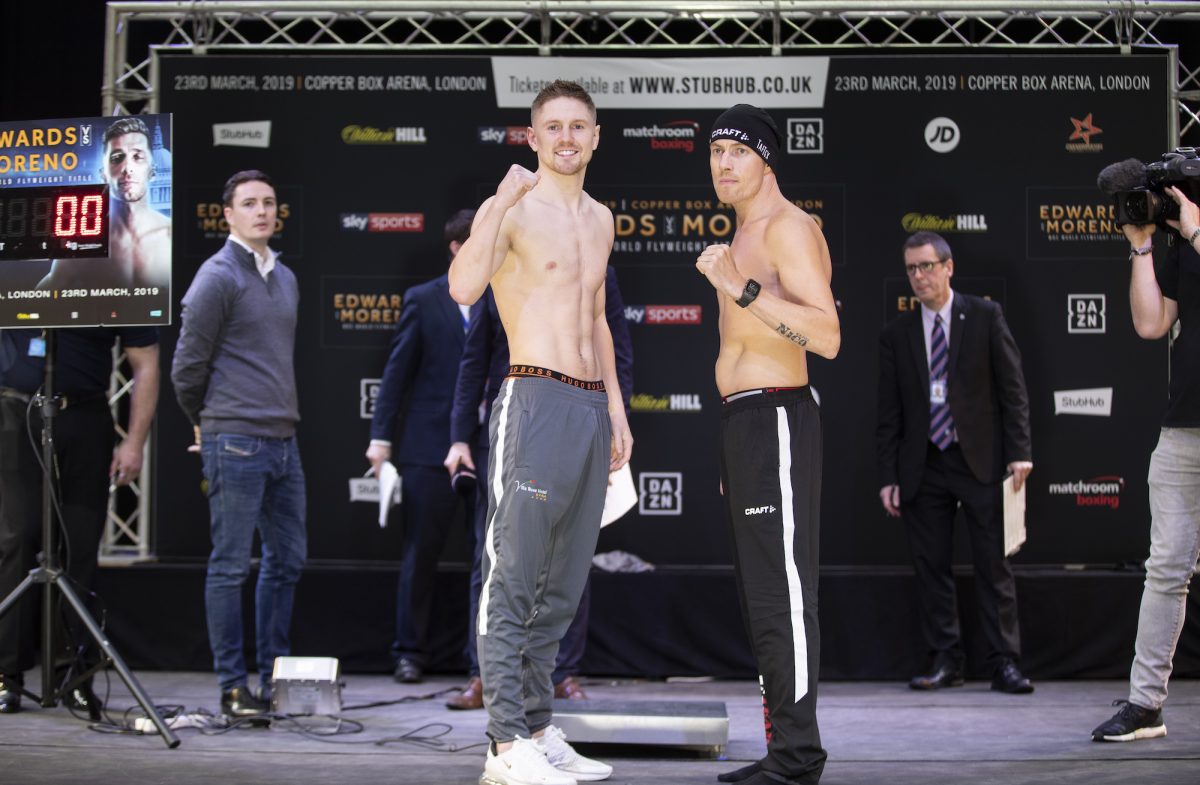 Jason Quigley has sights set on a shot at the world

Jason Quigley wants to use this evening’s fight against Mathias Eklund to help him get ready for some big nights and fights in 2019.

By Chris McNulty in London

Quigley will aim to keep his unblemished 15-0 record intact when he faces Finland’s Eklund at the Copper Box Arena.

Jason Quigley and Mathias Eklund weigh in ahead of their fight at the Copper Box. Picture: Mark Robinson/Matchroom

Quigley is ranked fifth in the WBC’s world rankings and has already been on the cusp of life-changing fights.

Last October, Quigley’s camp were in negotiations for a shot at  WBA middleweight belt holder Ryōta Murata (14-1, 11KOs) from Japan at Mandalay Bay in Las Vegas.

Having defended his NABF middleweight belt with a points win over Freddy Hernandez in Indio, Quigley returns to action five months on in London with his heart and mind already eyeing up a big push in 2019.

“I’m at a stage now where I’m on the borderline for world title fights,” Quigley said.

“I have to be careful of the next steps. They have to be the right steps. We can’t rush it now. We’ve played the game so well until now. We have to make the right moves.

“We have to take our time and that can be frustrating. I’ve had fights fallen through and fights in the pipeline that didn’t happen.

Jason Quigley in action against Freddy Hernandez in October

“This is all a process and nothing will happen for me overnight. I’m a big believer in things happening for a reason.

“I’ll stick to what I do and what I’m good at: hard work, focus, discipline. When dates come up, I’m ready to go in there and take care of business.

“God willing, 2019 will be busy. I’ve got a great team with Sheer Sports, Golden Boy and Dominic Ingle. They’re all looking after me so well.

“Moving forward into 2019, I want to be busy and want to be active. There could be hurdles and there have been in the past, but I’m blessed with the amount of people around me who are helping and looking out for me.

“I keep good, positive people are me. That’s what it’s about. Life is all about being in a good environment, being positive and I love having hard-working, driven people.”

Last year, Quigley returned after 12 months of inactivity due to a hand injury with a stoppage win against Daniel Rosario in Boston. Murata appeared on the radar, but despite having a first class flight arranged to Tokyo for a press conference, the deal fell through.

“There have been hurdles for me but none have sent me down a different path,” Quigley said.

“They’ve just stopped me going forward. I’m still on the same road and haven’t really had to take any detours yet. A few times I’ve hit red lights and had to stop.

“The green light is on now and I’m in a new year with the same goals and the same possibilities of title shots.

“I want to get this fight under my belt and get someone in the rankings in the next fight, maybe look for a world title eliminator.”

When he won silver at the 2013 World Championships, Quigley was the number one amateur in the world.

Now, he’s ranked fifth by the WBC, but Quigley wants to erase the number beside his name.

He said: “I’m at number five, but I don’t look at that as an achievement. To me, I’m still climbing and I want to get higher.

“I’m not where I want to be. I don’t want a number beside my name – I wand the word ‘champion’. I want everyone above me in the rankings to know me. I want to fight anyone who’s in my way. It’s about climbing higher on that ladder for me.”

Jason Quigley has sights set on a shot at the world was last modified: March 23rd, 2019 by Chris McNulty

Dating show on the hunt for young...