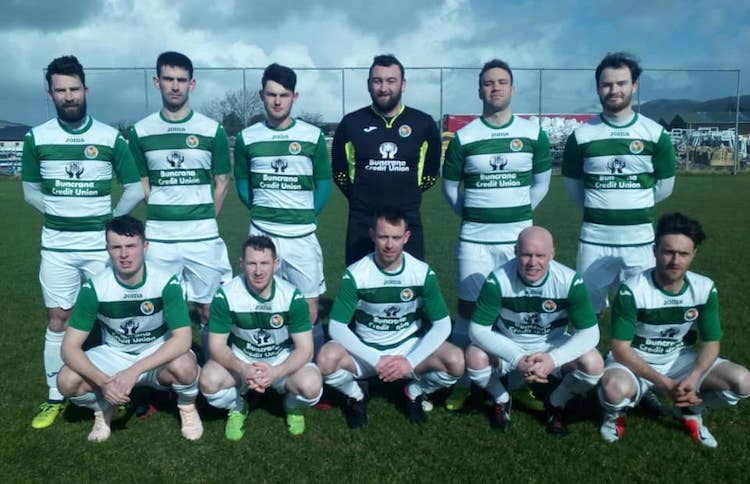 Bonagee had beaten Cockhill recently in the Knockalla Caravans Senior Cup, but Gavin Cullen’s team had the upper hand here with the hosts rocked by the sending off of Darren McFadden and Gareth Breslin.

McFadden walked in the 13th minute, given his marching orders following an off-the-ball altercation.

Cockhill started the brightest, with both Laurence Toland and Bart Wesowski causing problems.

Cockhill broke the deadlock on 38 minutes when Gill’s corner was stabbed home by Jimmy Bradley at the second attempt.

Bonagee continued to press, and Stephen Conroy was tested by Jordan Armstrong and Michael Doherty in quick succession after the break.

Bonagee were dealt a major blow after the hour when Breslin received his marching orders for two yellow cards.

Cockhill made sure of the three points on 70 when Gerry Gill shot home off the post following a good ball by Daniel Martin Doherty from the right.

Swilly were badly depleted and harps went ahead on12 minutes when Liam Walsh fired home in style.

Mark Russell, up from the back, fired home and Ronan Gallagher finished well from close range.

The second half was all one way and Mullen made it four after a fine run.

Ronan Gallagher, with a free kick, made it five and a Liam Walsh penalty made it six after 75 minutes.

Mullen (2), Stephen Doherty and Jack O’Donnell completed the scoring on a day when Ramelton man Tony McNamee played for the Harps.