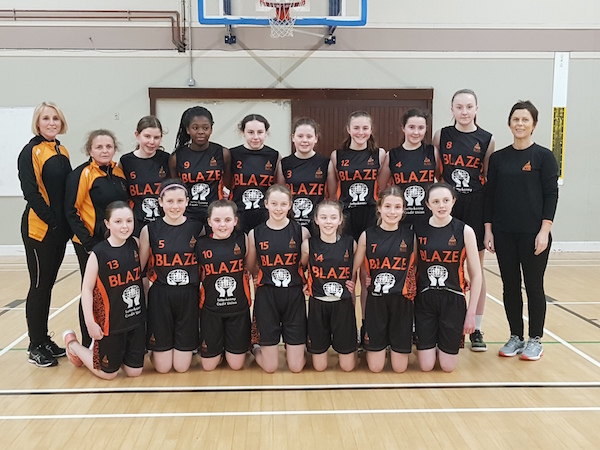 Letterkenny Blaze U14 girls basketball team have qualified for the All Ireland Club Championships (AICCs) which are being held in Gormanston 30th/31st March.

This team have had a phenomenal year having gone undefeated in both the North West League and the Basketball Northern Ireland (BNI) league. In addition, the girls went on to win the North West (NW) Supercup final against Mulroy last weekend in Donegal town and yesterday won the BNI cup final in Methody College Belfast against Queens BC.

The team journey began last November taking them to matches in Sligo, Tyrone, Belfast and throughout Donegal.

The NW Supercup was hosted by Donegal town on March 16th where they met, for the third time, playoff winners Mulroy. Both teams took the first quarter to settle into the game. With only 2 points between them, Blaze would have to up their game to get ahead. The Blaze girls came out fighting in the second quarter to move up in points Blaze 24 Mulroy 18. Blaze stretched their lead in the 3rd quarter following another 5 baskets taking them into the last quarter leading by 24 points. The final quarter was a low scoring for Blaze and Mulroy started to score. When the final whistle blew Blaze held out on top finishing Blaze 38 to Mulroys 18. A great performance from Blaze, with 8 different players getting on the score sheet.

In the Basketball Northern Ireland U14 Girls Cup Final on the 24th of March Letterkenny Blaze beat Queens 57 v 27.

Blaze started with some very well executed fast breaks, Sinead Otoo forced turnovers which she then finished with skill. Aoibhin Randles, Darcy Kelly and Louise Doherty also added to the scores to set Blaze up well going into the second quarter. It was 18-4 Blaze at the end of the first. The second quarter saw more of the same as Queen’s defence struggled to contain Blaze’s Emma Gribben. She was able to get rebounds at will and finish up with some fine scoring. At the half it was 35 – 6 to Blaze.

The third quarter saw Blaze’s two exceptional players, Otoo and Gribben scored at will. Blaze were well served by Emily Irwin, Gillian Reynolds and Randles as well. 50 – 15 at the end of the third. The fourth quarter saw a much improved defensive effort from Queens, and are to be commended for their constant energy. It wasn’t enough though as the final score was 57 – 27 to Letterkenny Blaze.MVP for the match went to Emma Gribben.

Congratulations to Sinead Otoo who was awarded a BNI Junior League All-Star Award as Sinead was one of the players who received the most MVPs in her league over the BNI season.

Best wishes to Blaze U14 girls and coaches Lorna, Rita, and Paula as they travel to represent Blaze Basketball Club and the North West in the All Ireland Club Championships this weekend in Gormanstown, Co. Meath.