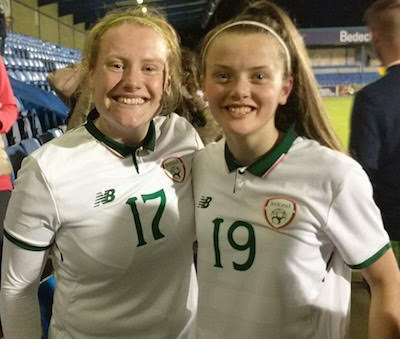 Tyler Toland and Amber Barrett have been named in a 20-player Republic of Ireland senior squad for an away friendly against Italy.

Toland and Barrett have been called in by Colin Bell, the Ireland senior manager, with the squad set to meet up on Monday ahead of the game on April 9 in Reggio Emilia.

As the Republic of Ireland will face Germany in the their qualifying group, Bell said it is important that the squad faces other top teams as they plan for the campaign.

“I’m hoping for a really good test against Italy, they’re a really strong side so we are total outsiders in this one,” Bell said.

“But we want to compete against the best teams. We beat Wales in the last camp – they are a second seed in the Euros – now we’re aiming to see if we can beat a first-seed team because we have Germany in our group, so we need to be comparing ourselves and battling against these kind of nations to be really prepared for the next campaign.

“Everything now needs to be really focused. In the last camp we could really tell that now that the draw had been made everybody was really programmed and focused and there was a really good buzz around the place, so we want to continue with that and build from that, keep the momentum going.

“All the energy that we have will now just be focused on this Euro campaign.”