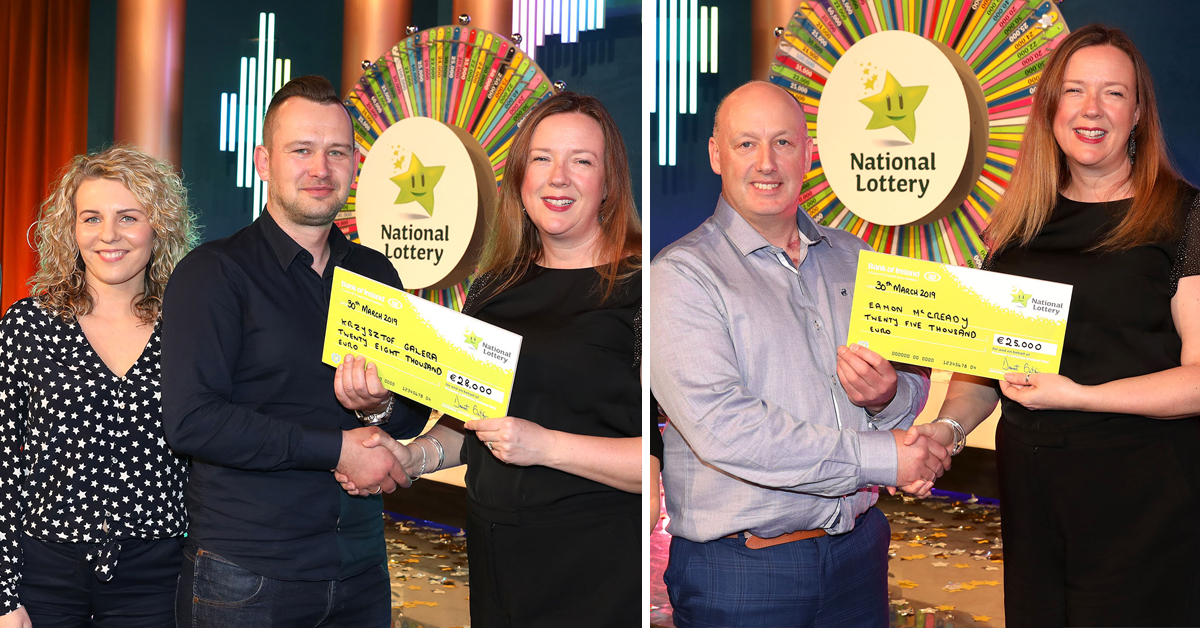 Not one, but TWO Donegal players scoop Winning Streak prizes

From National Lottery jackpots to regular Winning Streak appearances, it seems that Donegal people really are on a lucky streak this year.

Katarzyna (Katya) Galera scooped a tidy sum of €25,000 in cash as well as a holiday to Venice, Italy worth €3,000. The winning ticket was bought from American House, Main Street, Bundoran, Co. Donegal.

Katarzyna and her husband Krzysztof (Krzys) are originally from Poland and have lived in Donegal for the past ten years. They were both working last Saturday night in their respective jobs so both missed Krzys’s name being pulled out of the Winning Streak drum by presenters Marty Whelan and Sinead Kennedy.

Katya works behind the bar in Madden’s Bridge Bar in Bundoran and noticed that she got text messages congratulating her. Some of her customers started saying congratulations too so she thought, being a friendly atmosphere in the bar, that it was a joke between staff and customers.

That was until her eldest daughter Olivia called her to ask what was going on as she was even getting messages from friends to say her dad’s name was called out for next week’s Winning Streak. She went to a neighbour’s house and caught the end of the show and saw her husband’s name on the screen and she started to believe the good news.

It was a while before she got the news to Krzys as he works as a chef and wasn’t able to take a call or reply to a message but both decided that Katya would go on the show in Krzys’ place. After all she was the one who sent in the ticket and put his name on it!

The couple have two daughters: Olivia is 14 and Emma (2) – who watched her mum on TV from home.

Getting on Winning Streak could not have come at a better time for Eamonn McCready, from Doochery, Co. Donegal, not because he is in need of the money but if it was any later, he wouldn’t have been able to go on the show!

Next Saturday, he will travel to Albania where he will work for the coming months, only getting home to see his family every six weeks or so.

Eamonn was watching the show on Saturday when his name came out and he still finds it hard to put into words, the feeling seeing his own name come out of the Winning Streak drum. All he remembers is his wife and two kids jumping all over the living room and screaming in celebration.

He has been married to Anita for the past 17 years and the couple have two kids: Jamie (15) and Rihanna (13) who were excited to cheer their dad on from the Winning Streak audience last weekend.

They were joined by an equally excited Donegal crowd, made up of some of Eamonn’s eight siblings. His sister Sile watched online as she lives in Watford, UK and his brother, Daniel, who works with Eamonn will be watching from Albania as he travels out the week before his brother.

Eamonn works as a supervisor for a tunnelling company called Terra Solutions, who are headquartered in Newry. Next weekend he will travel to Albania to supervise a project which he will be working on for the summer but hopes to make it home every six weeks to see the family.

Eamonn is a huge sports fan and loves Donegal GAA. He says that if he wasn’t on Winning Streak he would be in Dublin at Croke Park watching Donegal tackle Meath in the football that evening. He also loves rugby and soccer and is a huge Liverpool FC fan.

Eamonn has no plans as of yet as he says he is just going to enjoy every moment of the Winning Streak experience and whatever he wins, he will be happy with. It is the perfect way to spend his last weekend before he goes away with work.

The Donegal duo’s appearance marks an amazing run for local contestants on Winning Streak. This is the sixth time in just seven weeks that people from the county have featured on the big money gameshow.