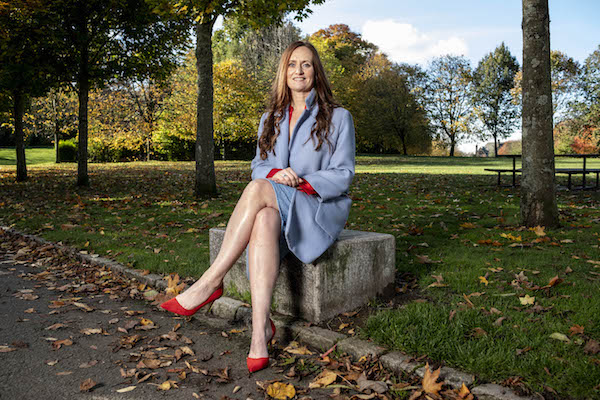 A Donegal woman’s work has been nominated for a prestigious Celtic Media Award.

Helena Gallagher, who is originally from Arranmore Island but who now lives in Scotland, is no stranger to the world of broadcasting.

The owner of HG Productions, Helena’s previous work has been nominated for other awards.

A previous radio documentary entitled ‘Searching for Answers’ was broadcast on RTE radio and won a Gold New York International Radio Award in 2011.

Helena regularly returns to Arranmore Island where she works and edits many of her productions.

Some of her other documentaries include ’Bus Ghlaschu’ and Iniscaroch which were broadcast on TG4 in 2017.

The documentary centres on the tragedy of stillbirth and miscarriage, and tells the heart-wrenching stories of the parents left behind, bereft and at a loss.

In a sensitive and moving documentary, BBC news broadcaster Mairi Rodgers, who also has Donegal connections, gives an honest account of her experience when she lost her baby Annie when she was 5 months pregnant.

Over the course of 6 months Mairi meets families touched by stillbirth and miscarriage including football Wag Lisa Hague and her partner, ex-Celtic football player Kris Commons, who lost their daughter Lola when Lisa was over 8 months pregnant. Lisa decided not to hold her daughter Lola when she was born ‘I deeply regret that, I deeply regret not holding her and not seeing her’.

BBC Broadcaster Annie McGuire shares her moving story of losing her daughter Grace in 2014 and how the trauma of that event impacted her life. She also reveals how friends and work colleagues didn’t know what to say or how to deal with the situation and by not saying anything often made the situation even more difficult.

Trainee Minister David Nicolson and his wife Victoria share their tragic story of having 3 miscarriages, discussing how that affected them as a couple and how their support of each other was vital to surviving.

As Mairi reveals how she struggled to cope with her own pain, her personal journey will give courage and hope to other families who are struggling with similar grief, and an insight into a subject that many people find difficult to talk about. What kind of impact did the trauma have on her relationship with her husband Lachie?

The prgramme follows Mairi as she makes an emotional return to the Raigmore Hospital where her precious daughter was born sleeping. Through her brave reflections we gain an isight into the realities she had to face up to when faced with the heartbreaking news of the complications with her baby.

In Labour of Love we see Mairi donate her wedding dress to Kim at Zaagi to have it transformed into little gowns for babies who are born sleeping. Kim shares her story of losing her baby Sarah and discusses how important it was for her to do something positive in her memory. In a moving scene – we see Mairi open the boxes containing the little gowns created by Kim with her 5 year old daughter Maired.

On her journey Mairi meets Psychotherapist Peggy Mullally and seeks advice and support about how to deal with the loss as an individual and as a family.

We’ll see Mairi looking at the memory box given to her at the hospital which contains the hand and footprints of her daughter Annie. In moving reflection, Mairi talks about how precious this memory box is to her and how important it was for her and her husband Lachie to spend time with Annie and make memories with her.

Mairi also attends events like the Butterfly release in Inverness which provides support to families who have lost babies and she visits the Tree of Tranquility to look at the unique way that babies are remembered.

Labour of love is a truly moving account of love and loss, told through the experiences of those who have lived through it. The intimate stories of how families have coped with such traumatic events through supporting each other reveal characters of immense courage and mental fortitude while offering hope and direction to those who have had to face similar adversity.

The awards take place in Aviemore in Scotland in June 2018 http://www.celticmediafestival.co.uk