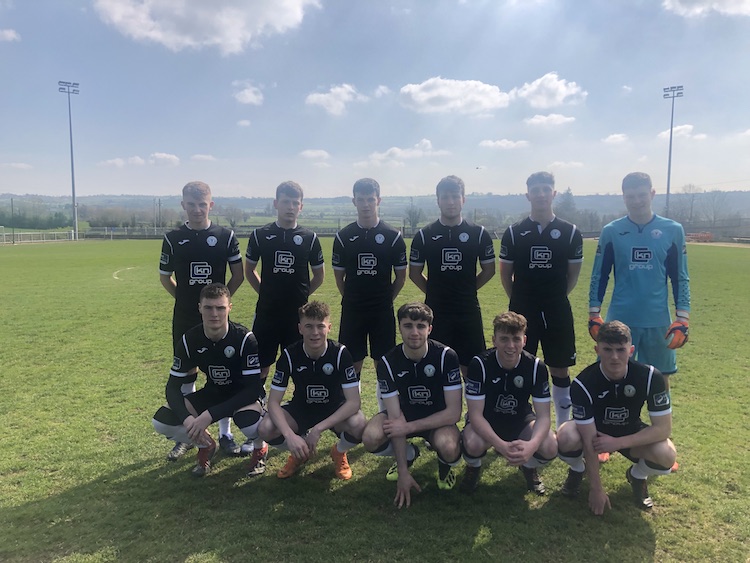 Stephen Doherty ended a fine week in style with another goal as Finn Harps Under-19s maintained their unbeaten start to the 2019 season.

By Chris McNulty at the New Camp Complex

Doherty struck a beautiful finish as Harps bagged a fine win over Drogheda United in Killygordon.

Jamie Browne and Pat Loughrey had Joe Boyle’s team two up at the break and Doherty added a delicious third.

Twenty minutes into the second half, Doherty curled superbly beyond Malachy Doyle, the Drogheda ‘keeper.

The Illies youngster made his Harps first team debut on Monday and netted a memorable extra-time winner in the 2-1 EA Sports Cup victory over Sligo Rovers. Doherty was an unused sub last night for Harps’ north west derby against Derry City and was back at his own age group this afternoon.

Harps led after 16 minutes when Browne flicked home a cross by Niall McGinley, making his return from a recent freak leg injury.

Harps had an early reprieve when Donovan Troy’s bullet headed was off target after he connected with Tom Adeyinka’s teasing cross from the right.

McGinley fired a free into Doyle’s arms before Ronan Gallagher’s close-range header was saved by the Drogs netminder.

Adeyinka prodded over the top before Browne broke the deadlock to give Harps the lead.

Seven minutes before half-time, Loughrey doubled the lead. Harps benefited from an advantage and the ball was switched from right to left with Loughrey tucking a splendid low finish past Doyle.

Jordan Adeyemo burst in before being denied by Harps netminder Joe Boyle.

Doherty was joined in the Harps line-up by Michael Gallagher, who also made his first team bow on Monday night.

It was Doherty who struck a fabulous third to put the game beyond Drogheda’s reach.

Gallagher and Doherty combined for another chance with Doherty denied by Doyle.

Harps were inches from a fourth, but sub Joel Bradley-Walsh, with his first touch, curled a wicked free kick just over the crossbar.

Late in the game, Daragh Ellison – last year’s Under-17 player of the year – saw an effort hacked from the goal-line, while Keenan Diver wasn’t far off with a header from a set-piece.