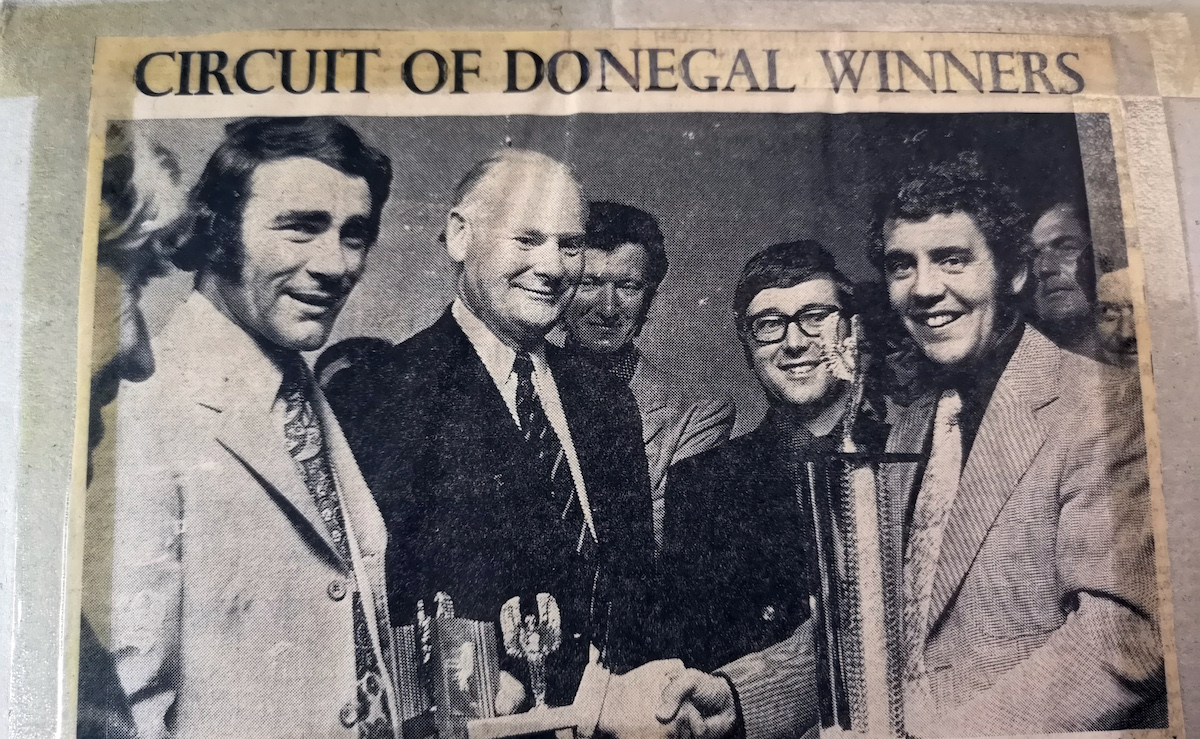 It’s the early 1970’s, Ireland and the UK have just joined the EEC. The troubles are escalating in the north, and add to this we have an oil crisis.

Donegal is located in the northwest corner of Ireland it has the lions share of the 310 miles of border between Northern Ireland and the south.

It had to be the worst time to look for overseas rally competitors to come to the county but it didn’t seem to dampen the enthusiasm of the newly form Donegal Motor Club.

For £2.25 you could stay in the Ballyraine Hotel, bed and breakfast (sharing) for competitors and their associates which was the rally headquarters.

The rates were up to and including the 14th of June for note making and recce purposes.

That increased to £6 per night for B&B was the special price for the weekend of the rally. or for £16 you could stay for the weekend on full board and that included dinners arrival on a Friday evening right through to breakfast on Monday morning. 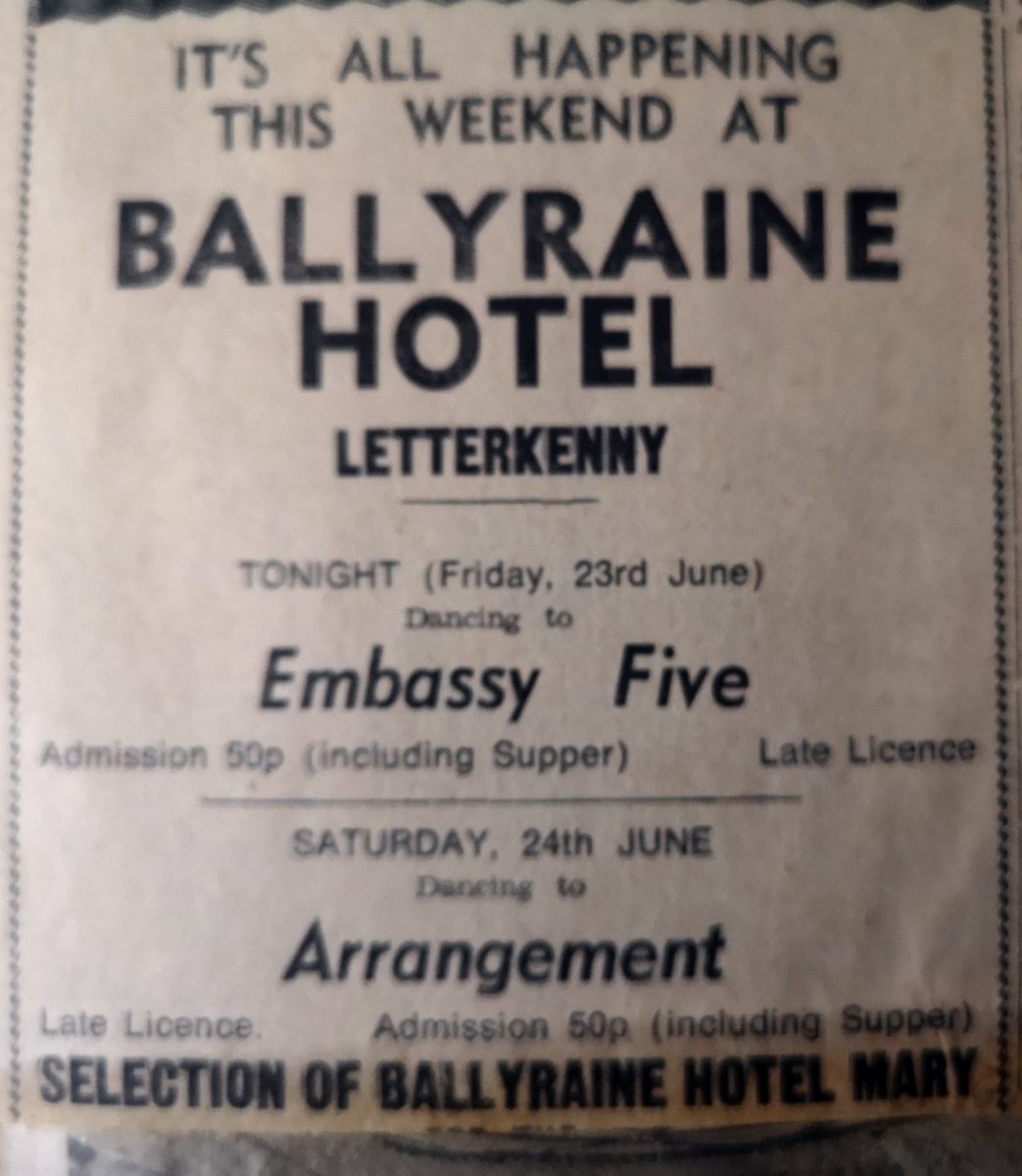 50p to get into the Ballyraine for the to the dance on Friday night on the weekend of the rally which included Supper.

The Motor Club had even convinced Irish Continental line Car Ferries to offer up to 40% off their standard passenger and vehicle fares on the Rosslare/Le Harve crossing for the weekend of the rally.

B+I Line were also offering a rate of £34 for a return journey for a car irrespective of length including up to 4 passengers.

First called “The Circuit of Donegal” based in Downings at the Rosapenna Hotel, with local sponsors like Sheephaven Festival and Development Association, Milford Bakery, Donegal Oil Co, Board Failte and Northwest Regional Tourism.

Locals on the event included teams like John Joe Boyce on the notes with Pj Wilhare driving. Conal Harvey navigating for his brother Eamon driving, both Donegal crews in Ford Cortinas.

The year now is 1974, ABBA has just won the Eurovision with their hit Waterloo and more Swedes have winning on their mind as they express an interest in competing in the Donegal Rally.

Top driver Bjorn Waldegard and Anders Kullang were named in a five-car team in February of that year to be heading to Donegal for the guest Donegal International.

Swedish Motorsport Promoter Fergus Saager informed the club that the Former Monte Carlo Winner Waldegard would be happy to come to Donegal and would be competing in the Porsche. 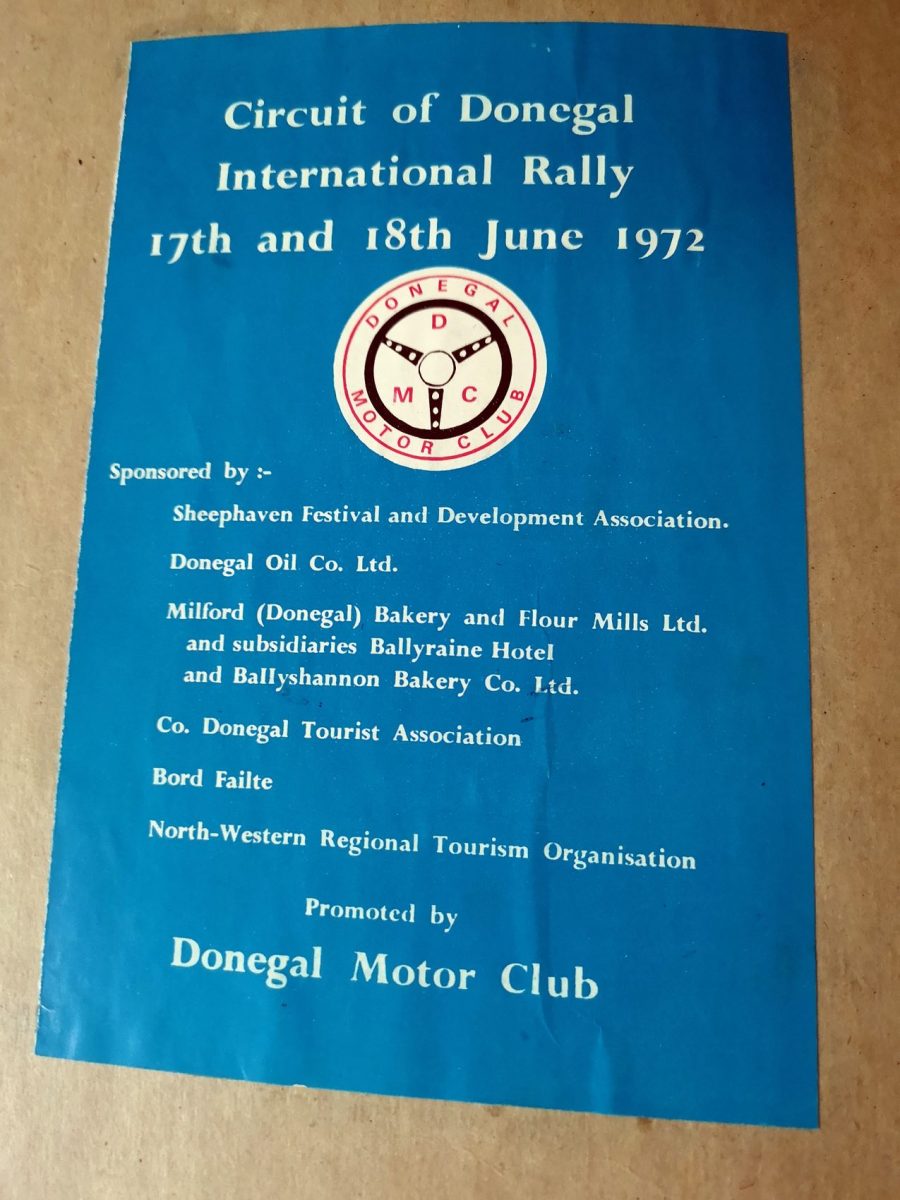 Sheephaven Festival and Development Association the top sponsor of the first Donegal Rally in 1972 which was passed in Downings.

Kullang would be happy to return to Ireland and was planning to do the event in one of the new Opels from the factory.

Kullang’s entry would be backed by local Opel Dealer Andy Hegarty, Ballymacool, and who would be supplying service cars and mechanics.

The other three Swedes on the team were Per Wigren, Christer Axelsson, and Goran Anderson.

As most will know Bjorn Waldegard never made it to Donegal but there is a possibility that Opels plans made it possible for another up and coming European driver.

It was Mikkola that spotted Vatanen’s potential in the Finnish National Championship who beat both himself and Timo Makinen on stages in the rally.

Hannu convinced Opel and General Motors to take the young Vatanen under their wing for the British Rally Championship and his Navigator Dave Richards made the deal with Andy Hegarty to sponsor the group one Ascona that Ari drove in Donegal. 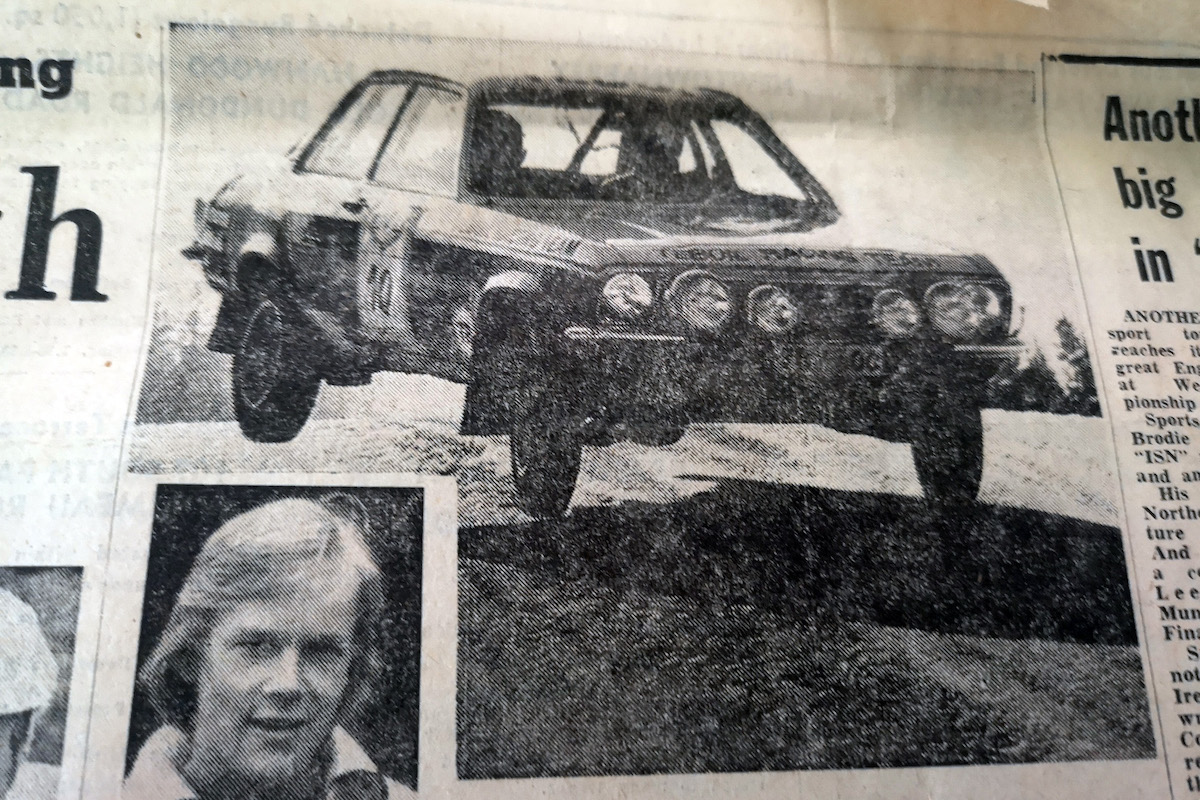 A very youthful Ari Vatanen putting the Opel Ascona through it paces in 1974 on the Donegal Rally.

This was his first ever tarmac and pace note event that the young Finish driver ever competed on.

Vatanen went on to become a world Rally Champion in the early eighties.

The first three Donegal rallies were won by Cathal Curley who was the man to beat in them days but his regular navigator Austin Frazer, a chemist by profession from Fermanagh, but rather than being in the winning car with Curley.

Frazer was on the winning team to head the organisers Donegal team as the first clerk of the course in those early years.

Donegal Winner of the Circuit of Donegal in 1973 Cathal Curley and Terry Harryman Tom Fitzpatrick T.D. Minister for Lands made the presentations. also pictured is Austin Frazer who was normally the Co-Driver for Curley but on this occasion, he was the Clerk of the Course

Meryvn Johnson’s navigator Harry Johnson and Austin Frazer both from Co. Fermanagh took time out after winning the Galway and Ulster rally as navigators to be part of the original organising team that made Donegal Rally a great success.

Austin Frazer had to wait to 1987 to collect his laurels on the event he was the Clerk of the course on as the first team to the podium as overall winners with Bertie Fisher in an Opel Manta.

On the run into the first Donegal International Rally in 1974 they then Co-Manager JD Williams who attended the press conference praise both the motor club and Board Failte who managed to extend the tourism season which up to then generally only included July and August.

Running the event in June encouraged more to come to Donegal earlier every year which the club succeeded in securing for their first international rally.

Packed to the rafters

In 1974 the motor club booked and secured in 5,222 bed nights in Donegal for the rally weekend. ranging from Hotels, Guesthouses and Farmhouses. 162 were booked into the Caravan Park in Kerrykeel.

Sammy Hamill with the Belfast Telegraph has reported on the Donegal rally since its creation all them years ago as did Brian and Liz Patterson. Plum Tyndall has been there year after year and in 74 RTE filmed the event by helicopter. 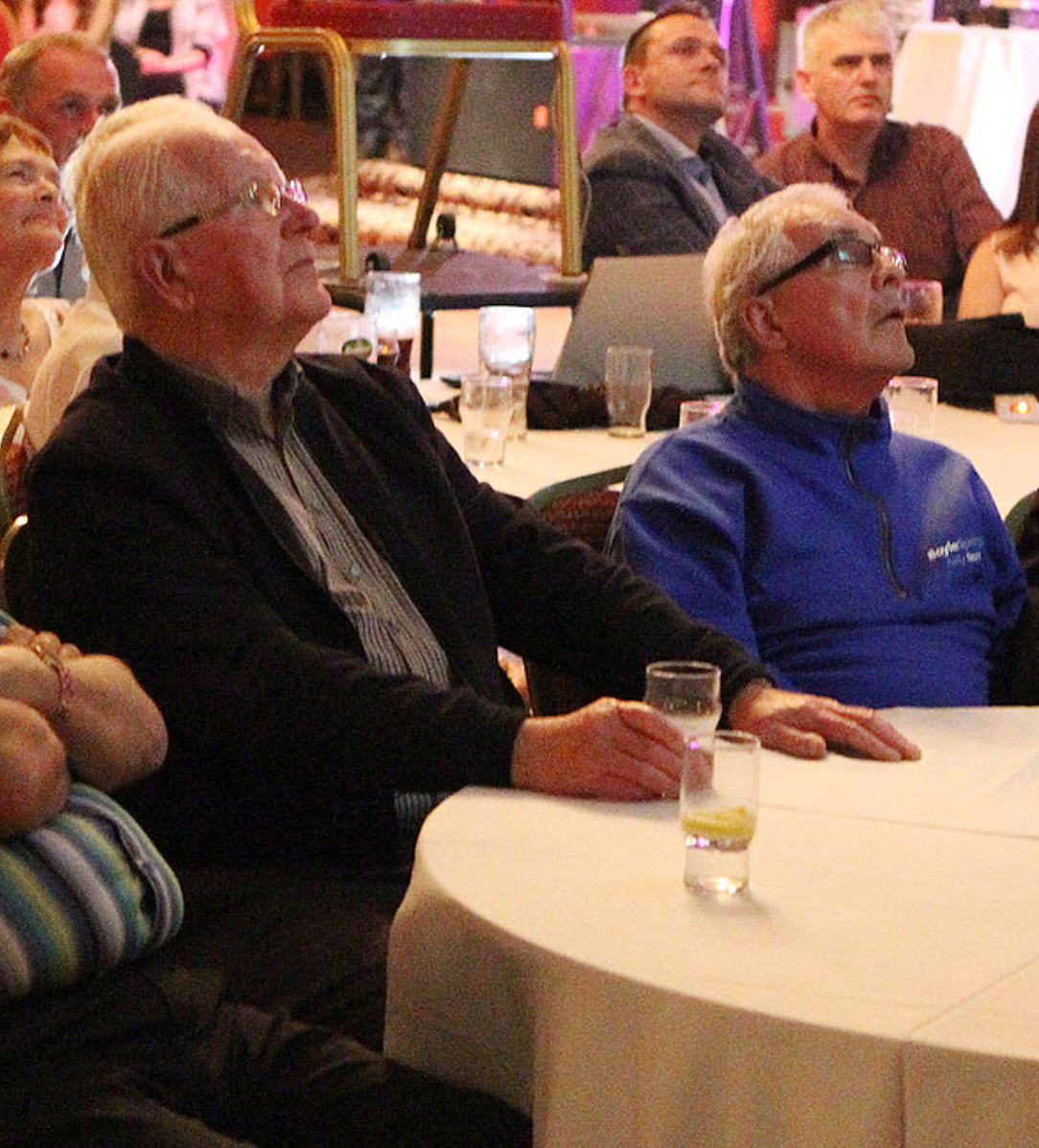 They were all thanked for their support and generous coverage in the papers at the end of the 1974 event.

In 1974 it cost twenty-five quid for the entry for the Donegal International Rally which included maps and all. It cost 50p to get into to prize giving dance on Ballyraine Hotel on Sunday evening (supper included) It was is estimated by Board Failte that the event was worth 4.7 million to the tourism industry that year.

This is just a snapshot of the information that first secretary of the Donegal Rally both Circuit of Donegal and Donegal International Rally, Phonsie Mc Elwee has accumulated of them great early years of the club and shared with us this week.

He was one of the local men who worked tirelessly back then to make the event what it is today.