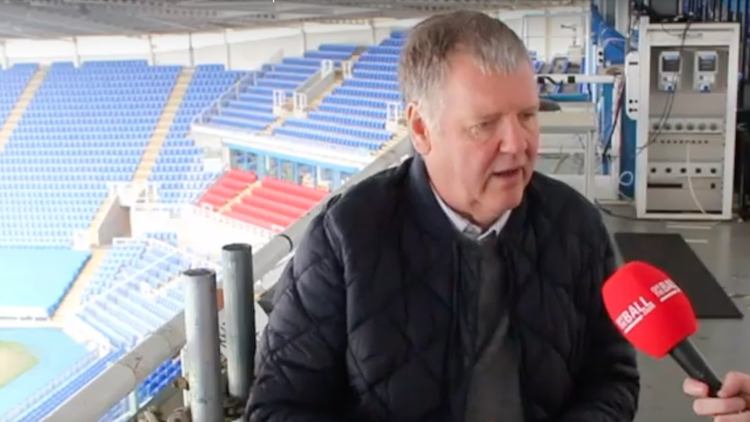 Legendary ITV football commentator Clive Tyldesley has recalled why his notes for Finn Harps’ 1978 UEFA Cup tie against Everton ended up with ‘a lot of crossings’.

Tyldesley has been ITV’s voice of football since the 1990s and his remembered for his iconic calling in the 1999 Champions League final when he wondered: ‘Can Manchester United score? They always score’ just moments before Teddy Sheringham equalised against Bayern Munich.

Tyldesley was recounting his life and times with Off The Ball’s Shane Hannon when the topic of Harps’ clash with Everton came up.

The game was the first time Tyldesley worked on a game in Ireland. Fran Fields, the former Finn Harps Chairman, collected Tyldesley from Dublin Airport and on the way filled the commentator in with all he needed to know about Harps.

“I went down early to the, I think stadium might be pushing it, venue,” Tyldesley remembered.

“There were Everton fans helping to mark the lines out and everything. It was fantastic and a lovely communion of football. A journalist who covered Finn Harps regularly came and introduced himself.”

The ensuing conversation had Tyldesley realising that Fields had, in fact, given him a rather fictitious account of Harps’ squad.

“If I found my notes for that game, there were a lot of crossings before kick-off,” he said.

See the interview below …

"If I ever found my notes for that game, there would be quite a lot of crossings-out…"

Legendary football commentator @CliveTyldesley sat down with @ShaneHannon01 for Off the Ball, recalling some ever so slight exaggerations fed to him before @FinnHarpsFC took on @Everton pic.twitter.com/0qOCs5b0WH