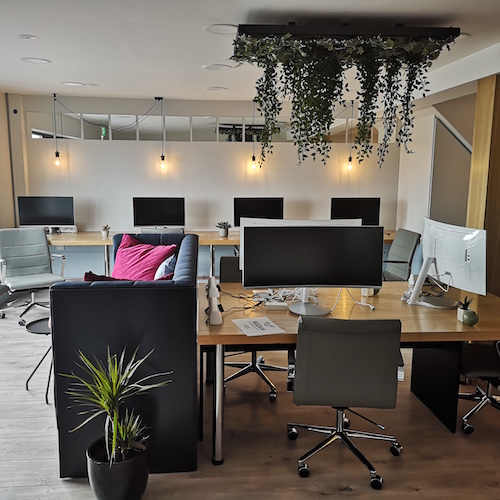 Islanders on Arranmore Island five kilometres off the coast of Donegal hope MODAM will breathe new life into an ageing population and encourage those who have left the island to return.

Today saw the unveiling of the building which boasts 13 digital desks and an average speed of 100 megabites.

Arranmore’s Community Council now hope the state-of-the-art building along with the high-speed broadband will encourage islanders who have long left its shore to return.

Seamus Bonner, an islander born and bred, is a member of the island’s community council.

He’s old enough to recall when the latest chart hits blasted from a jukebox in the corner and a line of arcade games swallowed 10p coins as if they were going out of fashion.

Two pool tables separated the boys from the girls with common ground being found at the sweet vending machines.

Seamus has seen many changes on the island but the common thread has been a gradual decline in population which sees a community of just 469 people left from more than 700 some years back.

He hopes the arrival of the digital hub which will revitalise the fortunes of the island and its people.

by Stephen Maguire on Arranmore Island

“So many people have come together to make this happen but it needed to happen. It’s no secret that the numbers of people in the island has been in serious decline.

“Somebody compared this to the electrification of the island and I think that’s a fair comparison. The arrival of this digital hub along with such high broadband speeds will make this as a place people can come and stay connected.

“People from Arranmore are dotted all around the world and with this development, they will be able to come back and work from here for a week, a month or for good,” he said.

One of those people is Nicola Greene who works for insurance company Optum in Letterkenny.

She may not be halfway across the globe but the opening of MODAM (named in a competition by local secondary school pupil Aiden Doherty) means she can catch the fast ferry at Burtonport and be out here in fifteen minutes to visit her mum and stay a few days.

“To be honest it has reignited my relationship with Arranmore. I come back a good bit but the opening of the hub means I can work and stay here for as long as I like and my company is okay with that.

“I would have to download a lot of large files with my work but with the broadband here that is now possible,” she said.

Her sentiments are echoed by her schoolfriends Eimer Gallagher and Lisa Rodgers who now plan to return from their homes in London where they have lived for a number of years.

Lisa is in business consultancy and Eimer is in fashion.

Both have children and while their ability to return to the place of their childhood will be dictated by school holidays, the improved connectivity means they can extend their visits and work from the island.

In what used to be the ferry’s ticket office in a room off the main digital hub, exiled islander Neil Gallagher, CEO and Founder of educational tech company Caped Koala is on a video call from London.

The quality of both the sound and the picture is perfect.

“I was on the island last week and the connection there is twice as fast as I have in London. I was there in 2007 and tried to work from the island but I wasn’t able to because the connectivity was not there.

“It is there and I can see myself returning in future and perhaps even setting up a remote base for my company.

“Like many other islanders, I’ve always wanted to add value to my community and this connectivity by Three will allow me to create opportunities and bring employment, by training people on the island to test software and take active roles in EU research projects. Beyond this, I hope to set up time-specific project teams on the island taking advantage of both the facilities, island life and the cost benefits.”

On a commercial level, islanders hope the opening of MODAM will bring plenty of financial spin-offs for the locality and for various local businesses.

John McCafferty, manager of one of the island’s co-ops, Ionad an Chros Bhealaigh, is convinced the new connectivity will attract so many new visitors.

And that’s good news as the co-op, which employs seven people on the island, offers a range of services including sailing, bike rental, kayaking and children’s clubs.

“People know their children will be safe and have plenty to do on the island when they come to use the hub,” he said.

Increased broadband speeds have also been installed in a number of local business and community facilities, including in Scoil Athphoirt where students can now use interactive whiteboards, research online and participate in online learning.

The broadband solution has also been installed in the medical centre which will facilitate telemedicinal applications including video consultations with consultants on the mainland, saving patients a four-hour round trip to Letterkenny or overnight trip to Dublin.

And for a population whom half are aged over 65 years, that it is a vital link.

When the people of Arranmore flagged up a need for better connectivity to breath new life into the island, both Donegal County Council and the Department of Rural and Community Development back the plan.

But so too did Three Ireland who have supported the project at a grassroots level and help to make the island community’s dream a reality.

Eóin MacManus, Business and Enterprise Director at Three Ireland said “Last year we became aware of the great work being done by the Arranmore Business Council to improve connectivity on the island and, looking at the portfolio of services that we provide to thousands of businesses in Ireland, we identified a number of ways that we could help. We approached the island as we would any enterprise customer and worked in partnership with them to identify the best solution.

“As Ireland’s leading data network, we know how connectivity can transform lives and businesses, and we are delighted to bring this connectivity to Arranmore. Today’s launch marks the start of a long-term partnership as we work with the people of Arranmore to help deliver their ambitious plans for the island which will enable them to sustain and develop their community.”

“We allocated €100,000 from the Town and Village Renewal Scheme because we knew it could be a game-changer for the island,” said the Education Minister.

“There is a massive potential now for remote working and bringing jobs to the island. I saw the hub two weeks ago and I welcome the partnership between the local community and businesses to take the project forward.”

How PacMan and Rod Stewart might just breathe new life into Arranmore Island was last modified: April 17th, 2019 by Stephen