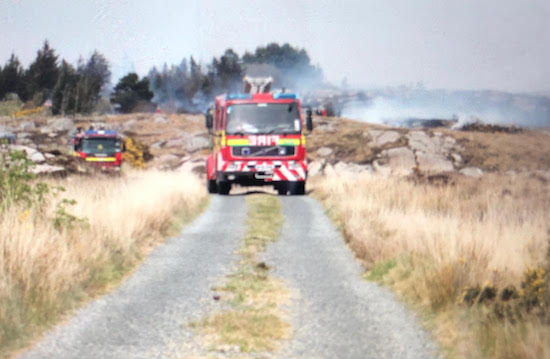 Breaking: Houses destroyed by raging gorse fire as firemen battle to save others

Two houses have been destroyed as dozens of firefighters try to tackle a massive gorse fire in West Donegal today.

The houses close to Drumnacart in Annagry were both engulfed by flames this afternoon.

At present, there are eight units of the Donegal fire service at the scene of the blaze which is stretch out over a large area.

The other seven fire units have also been mobilised in the event that other fires may break out in the county.

There are no reports of anybody being injured after the two properties were destroyed.

Scores of local people are also helping firefighters to bring the blaze under control.

Firemen are dampening around several other houses in the area to prevent the raging flames from catching hold of dwellings.

Local county councillor Micheal Mac Giolla Easbuig has been helping to battle the fires along with scores of other locals.

He said that although now may not be the time to point fingers, a full investigation into the cause of the fires must be carried out.

He also paid tribute to the emergency services including the fire services for their bravery and commitment to their local communities.

“It’s sad to watch people being forced to move all their personal possessions and belongings from their homes not knowing if their home will be there when they return,” he said.

The disaster comes just a day after the local council warned people about gorse fires as temperatures soar up to 23 degrees over the Easter Bank Holiday Weekend.

Donegal County Council urged landowners and members of the public to exercise caution and to take all necessary measures to prevent the occurrence of wildfires involving material such as gorse, heather and similar.

The council is also urging landowners and members of the public not to engage in activities that could cause wildfires – especially to those heading outdoors to take extra care with camping stoves, cigarettes and throw-away barbecues.

“Householders or building owners in areas susceptible to wildfire are advised to remove or cut back any vegetation in the immediate vicinity of their house, building or oil tank to prevent wildfires damaging or destroying their property,” said a spokesman.