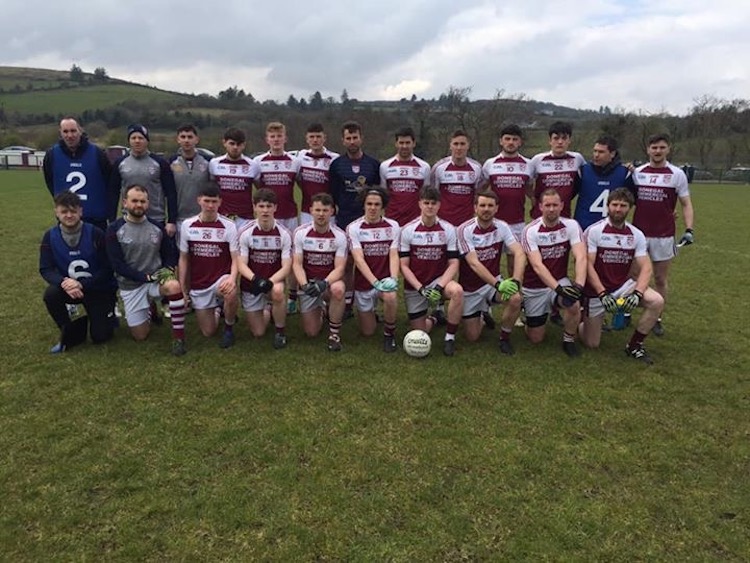 The night was darkening fast when a final, decisive swing of Ricky Gallagher’s leg arched Termon to a dramatic Division 2 win over Buncrana.

The teams had been level eight times over a breathless encounter at The Burn Road and it seemed as if they were destined to end on even terms.

That was until Gallagher, as the clock ticked into the seventh minute of added on time, pulled the embers from the fire for Termon as a last-gasp point sealed the victory.

Twice over the hour – once in each half – Termon were four points up, but never-say-die Buncrana just wouldn’t go away.

The Inishowen side finished with 13 men as they had Conor Grant and Odhrán Doherty sent off, while Termon saw Enda McCormick – who kicked eight superb scores – red carded for his part in a 47th minute altercation that also resulted in Grant’s dismissal.

Doherty was banished in added time for an off-the-ball incident with the teams level.

The Termon goal arrived 11 minutes from time when Buncrana goalkeeper Harry Doherty was adjudged to have unfairly impeded Aiden Sweeney. It seemed a harsh call against Doherty, who looked to have eyes for ball only.

That put Termon 1-12 to 0-11 in front, but Oisin Doherty, John Campbell, Darach O’Connor and Odhrán Doherty marched Buncrana onto a level footing again.

Connaghan’s free looked to be enough, but Campbell equalised again – only for Gallagher and Termon to rustle up a winner.

McCormick showed plenty of quality in the first half, when he posted seven points as Termon led 0-9 to 0-7.

A long-range free got Termon off and running a little over a minute in and he followed it up with a sumptuous effort from the left soon after.

Perhaps the pick of the bunch was a majestic free, lifted off the left-hand side of the ’45 midway through the half.

McCormick hit three-in-a-row after former Donegal player O’Connor’s clever side-step set up a score to level it at five-apiece. O’Connor is off to America in the coming weeks and his will be a big absence for the Scarvey men.

Shane Doherty’s point put Termon 0-9 to 0-5 up with seven to play in the half before Buncrana struck a warning shot when Oisin Hegarty crashed off the outside of a post.

A free from goalkeeper Doherty brought Buncrana within two at the changeover.

John Campbell – who ended with seven points in all – teed up a frenetic second-half with a pair of early scores. McCormick’s wonderful point under pressure, as he was falling off balance, helped Termon take command again before he and Grant were dismissed following a skirmish.

Termon were without Michael Boyle, Nathan McElwaine and Daire McDaid, and veteran Paddy McDaid was manning the number 1 shirt. A fine save from Campbell’s palmed effort would keep Termon in front and, as the night wore on, would prove crucial.

Gallagher spurned a big chance after being put clear by Sean O’Donnell’s chip, but he atoned with that late winner as Termon make it two wins from three.