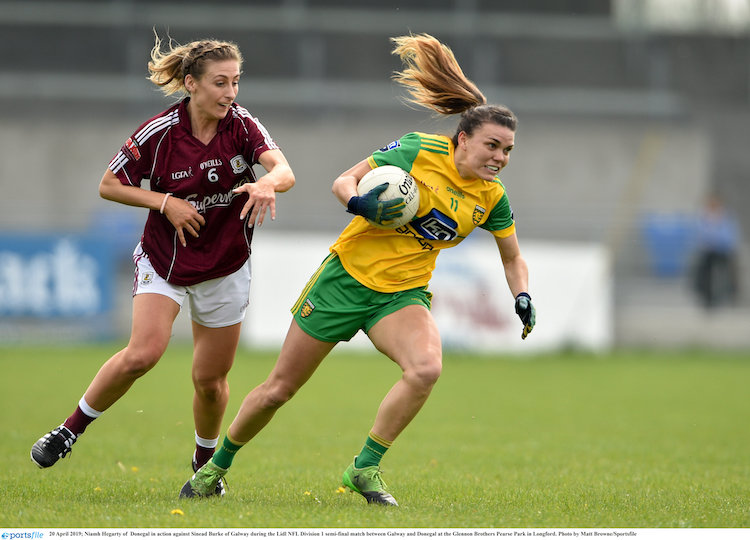 Galway prove too strong for Donegal Ladies in League semi-final

Galway’s outstanding form this spring continued as they burst out of the blocks against Donegal and easily secured their place in the Lidl Ladies NFL Division 1 final, their first time to reach that decider since 2015.

The Tribeswomen enjoyed a nine-point win when the two sides met in the round robin stages but the very youthful age profile of this Donegal team suggested that they would benefit from that game in Corofin a fortnight ago.

Instead Galway picked up where they left off, firing over three points in the first two minutes while playing some superb attacking football.

Picture: Niamh Hegarty of Donegal in action against Sinead Burke of Galway during the Lidl NFL Division 1 semi-final match between Galway and Donegal at Glennon Brothers Pearse Park in Longford. Photo by Matt Browne/Sportsfile

Louise Ward won the throw in and sprinted through to fire over the opening score after ten seconds and when Róisín Leonard and Mairéad Seoighe added points from the next two attacks, it looked as if Galway were capable of racking up a big score.

Donegal’s first visit inside the Galway 20 metre line didn’t arrive until the seventh minute but they made it count. Niamh Hegarty played in Geraldine McLaughlin, who arrived a split second earlier than Galway keeper Lisa Murphy and was bundled over by the Kilkerrin-Clonberne player.

Hegarty slotted home the penalty to tie the teams up, but Galway’s rhythm was unbroken and they quickly took control of the tie again, with cousins Róisín and Tracey Leonard on the mark with scores.

Five wides were the only blemish on a scintillating Galway first-half that featured some wonderful kick-passing and tireless support play, all in the unseasonal mid-day sun.

Galway led 0-9 to 1-1 at half time, and the sides added a point each through Amy Boyle Carr and Róisín Leonard before Galway effectively settled the tie with a well-worked team goal in the 35 minute.

Megan Glynn and Mairéad Seoighe combined down the left wing and Glynn’s electric burst of pace sent her clean through on goal. She drew Aoife McColgan out before handpassing the ball across to Sarah Conneally. Conneally palmed the ball towards goal, with Glynn getting the final touch before it crossed the line.

Donegal continued to apply themselves wholeheartedly and they enjoyed a brief spell of dominance when Niamh Hegarty, Geraldine McLaughlin and Karen Guthrie all pointed, but a succession of missed frees proved costly and ensured that Galway always had at least two goals to spare.