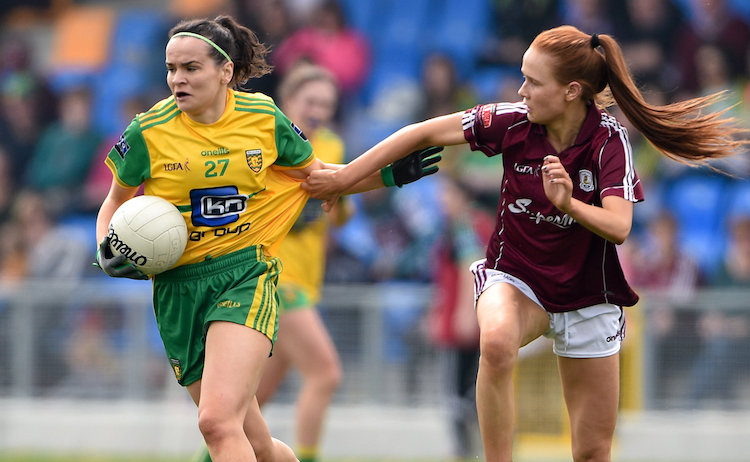 Listen: ‘We were well beaten by a better team’ admits Maxi Curran after semi-final loss

Maxi Curran admitted that his Donegal ladies were ‘well beaten by a better team’ in this afternoon’s Lidl NFL Division 1 semi-final.

The Tribeswomen defeated Donegal 1-12 to 1-5 in Longford and Curran had few complaints.

It was the second defeat at Galway’s hands in recent times, but this one was different.

Picture: Gereldine McLoughlin of  Donegal in action against Olivia Divilly of Galway during the Lidl NFL Division 1 semi-final match between Galway and Donegal at Glennon Brothers Pearse Park in Longford. Photo by Matt Browne/Sportsfile

“We left Corofin and there were nine points in it and we felt the game wasn’t a reflection of the score-line,” Curran told Donegal Daily/Donegal Sport Hub.

“Today was the opposite. We were well beaten by a better team. We couldn’t get to the pitch of it.”

Still, however, Curran wasn’t too downbeat and says his team will reflect on a positive spring as they head for the Championship and a June showdown with Tyrone.

He said: “It’s a good day at the office for us and it’s been a very good League for us.

“It’s all about the Championship and the League is a means to an end. When the dust settles, we’ll be happy enough with how the League went. We’ll take a lot of learning out of it.”