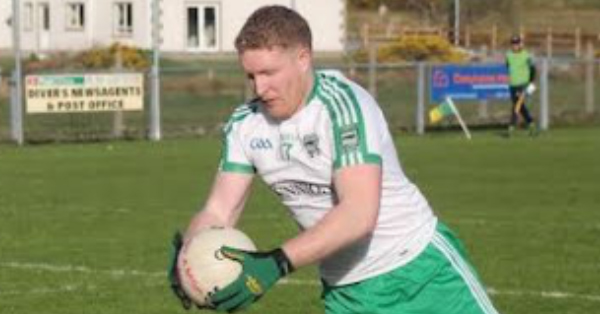 Seán Mac Cumhaills picked up their first two points back in Division 1 after a hard-fought win over St. Michaels in Ballybofey.

Rocked by an early goal by Michael Langan the Twin Towns side rallied well with a triple salvo from full forward Darren O’Leary and were level on 15 minutes with the visitors.

Andrew Kelly restored the visitor’s lead but Mac Cumhaills had a goal chance through Gary Wilson but Mark Anthony McGinley did well to deny him.

Padhraic Patton put Mac Cumhaills back on level terms and the home side dominated the remainder of the half with Martin Gallagher salvaging a point from a goal chance before Steven O’Reilly hammered home Mac Cumhaill’s opening goal to put some wind into their sails.

Two further scores from the boots of Luke Gavigan and Gary Wilson from play put Mac Cumhaills in a commanding lead before excellent attacking play from the home side resulted in Barney Lafferty being fouled and Stephen Mulligan converting the free.

For the visitors, Edward O’Reilly had a goal chance himself only to be denied by Mac Cumhaill’s keeper Eoin Gallen and St. Michaels added a point from a 45’ from Michael Langan and the home side went in with a 6 point cushion, 1-8 to 1-2.

Starting the second half Marty O’Reilly was presented with a goal chance but did well to keep the scoreboard ticking over with a well taken point.

St. Michaels clawed the six-point deficit back to three when O’Reilly converted a goal chance.

Marty O’Reilly was brought down and Stephen Mulligan converted the free to put the lead out to five in Mac Cumhaill’s favour.

The next four scores were all for the home side as Darren O’Leary (free and play), a fisted point from the industrious Barney Lafferty and a much needed goal by Rory Dunleavy on 51 minutes put MacCumhaills 11 in front.

St. Michaels never gave up in the dying 10 minutes of the second half and landed their first score of the half on 53 minutes with a 45’ from Langan.

They looked to be in for a much needed goal when Langan passed to Christopher McElhinney whose goal bound shot was brilliantly saved by Eoin Gallen.

McElhinney then turned provider when he offloaded the ball to John McFadden who did beat Gallen.

A point from Hugh O’Donnell took the hosts’ lead down further but Mac Cumhaills had done enough to earn the two points despite an edgy finish.