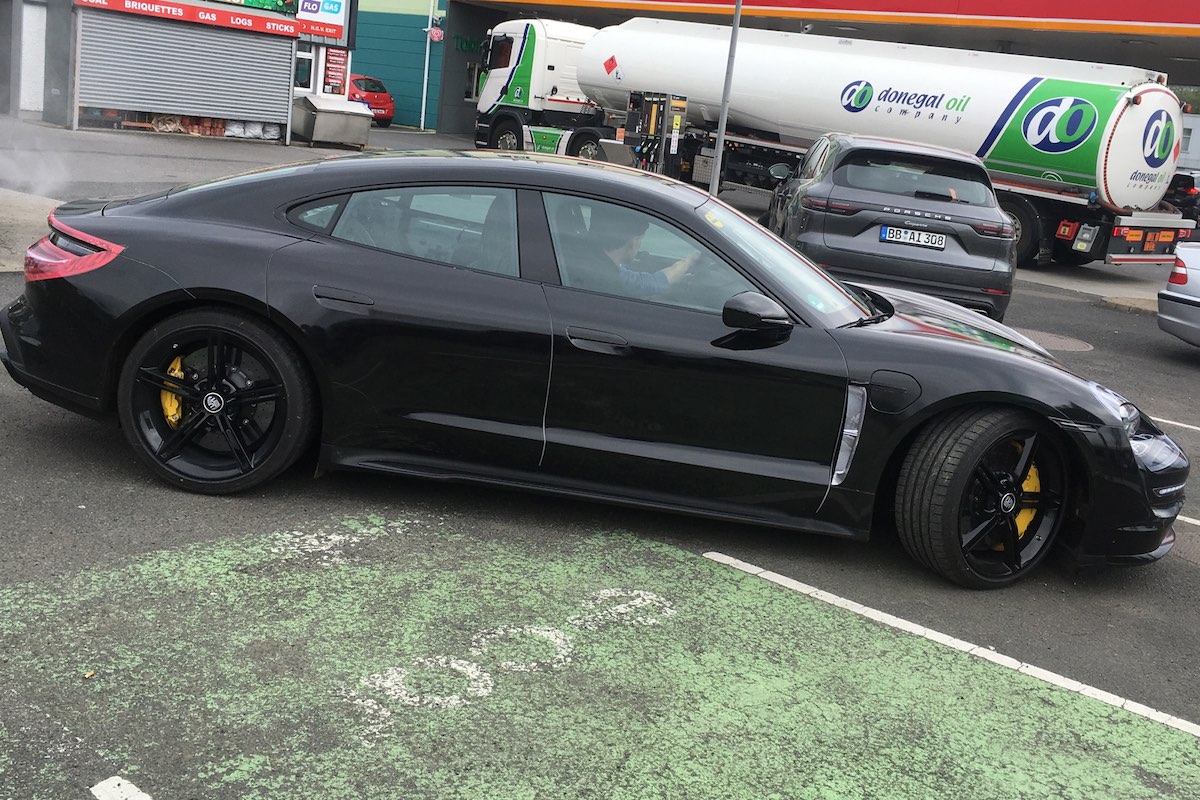 It’s another Bank Holiday Easter weekend and Donegal is full of tourists, mostly out from the north as they take advantage of the good weather.

Cars with roof racks and boxes, bicycles clipped to the boot-lids with caravans on tow.

One car looks different from the rest. There is something not just right about its appearance.

Back to the Future.

If we had seen a flux capacitor on it, this supercar might have passed for a DeLorean made famous by the “Back to the Future” box office hit in the 1980s.

The Old De Lorean in the Film “Back to the Future” which had to try harder to get an electric supply.

Under a heavy camouflage the car (all in black) and with headlights and taillights painted over the latest design and even a badly made Mercedes badge in the boot lid and the cars proper crest on the bonnet covered over in black duct tape the low slung coupe-like supercar made it way into Donegal over the Easter holidays.

The German-registered left-hand drive car and its passengers might have thought that this teams effort to make this prototype look like a big Mercedes would pass unnoticed.

A view of the rear of this mystery car pictured in Letterkenny this week with a team of technicians in support.

But even when it was sitting in a traffic jam local motorist in Donegal knew there was something rare about this black sports car.

Watching the car pull off the road and heading into the filling station the Donegal petrolheads were completely baffled when this supercar pulled up to the electric charging point.

The rear end of the Supercar with false tail light to confuse onlookers of its real design.

Had our visiting German tourists mistaken our electric point for a petrol pump?

Was it a Tesla?

First impressions of the supercar as it plugged into the electric quick charger suggested that it might be one of the American built all-electric Tesla sports cars.

The very badly hand-drawn three-pointed starts on the boot lid might do it job from a distance to confuse someone into believing it was a Mercedes Benz that they just seen passing by.

A close up of the taillight reveal that they are false and part of a print included in a body wrap to his the design of the new Porsche.

But up close this looks comical to the point that no one could ever claim that this was a Merc badge.

This car, whatever it was, was covered up in a complete body wrap that included misleading headlights and tail light clusters printed on to the graphics.

Back in the days of the film, ‘Back to the Future’, Michael Fox and Doc Browne had to wait on a bolt of lighting for their engird supply, meanwhile our mystery car in Donegal just plugged into the E-car charger at Tobin’s and as the car electric supply replenished it batteries another German registered large SUV pulled up alongside it.

The test crew in the electric Porsche pictured with its false headlights covering the real design of this new supercar.

The drivers and passengers of both vehicles get out and all join in a conversation in German.

It was soon clear these were folk were not here for a holiday all dress as a team of technicians or mechanics.

The second car that looked like a support crew were driving a Porsche so there’s a good chance that this supercar was also a Porsche and possibly the all-electric one which is due to be launched at the Frankfurt motor show later this year in September.

Was it a Taycan?

If it was the electric Porsche (Taycan) in Donegal this week with it was here undercover with all it badges covers up which was a far cry the first car that Porsche ever made was was also electric.

Well over one hundred years ago, Mr Porsche, proud of his invention, had engraved the code “P1” (standing for Porsche, number one, signifying Ferdinand Porsche’s first design) onto all the key components.

Called Egger-Lohner it was was a carriage-like car driven by two electric motors within the front wheel hubs, powered by batteries. This drive train construction was easily expanded to four-wheel drive by mounting two more electric motors to the rear wheels,

The Mercedes badge which was painted on to the rear of this supercar to hide it real identity as it completed testing in Co.Donegal this week.

The support team in Donegal this week politely kept to themselves and spoke mostly in German, but a local man from Letterkenny who would be well into his cars managed to get chatting to the team as they waited for their electric car to charge at Tobin Filling Station in Letterkenny.

John Frizzell managed to get a reply of figure 220 from one of the mechanics in broken English.

John Frizzell has a yarn with the German mechanics at the Porsche Prototype Electric car is charged in Letterkenny.

As of yet, we’re still trying to work out if that figure was the speed that car could achieve or was the range of miles it could go on one charge or the price tag of this amazing piece of German engineering which was in Donegal this week to test their supercar on our famous roads.