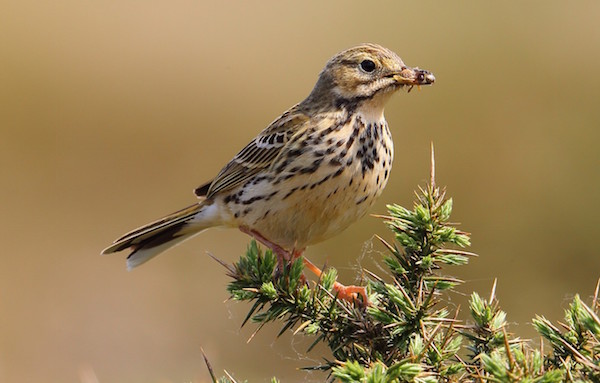 A number of species including the Meadow Pippet, Stone Chat and Linnet had breeding grounds among the hundreds of acres of wild gorse which caught fire.

Up to seventeen sections of Donegal Fire Service, the Civil Defence, the Air Corps, the Army and hundreds of locals battled to stop the spread of the fire between the villages of Loughanure and Annagry.

It took more than 12 hours to quell the fires which claimed at least one holiday-home and a number of vehicles.

However, Birdwatch Ireland spokesman Niall Hatch told Donegal Daily that the environmental impact on the area has been devastating.

“Unfortunately we are in the middle of the breeding season and thousands of birds would have been wiped out in that large area.

“And the problem is that these birds are quite territorial which means that they simply cannot move into another area and breed again,” he said.

He said it will be several years before wildlife in the area will return to normal.

“It has been devastating not just for the bird life but for all natural life in the area. The intensity of the heat means that it will be several years before the area will return to normal.

“What is left is just barren land which is completely destroyed and wildlife will stay away from it because it will be quite a while before vegetation providing any real cover will grow again,” he said.

Mr Hatch said that as well as Meadow Pipits, Stone Chats and Linnets, other endangered birds such as Hen Harriers and Curlews which forage on such gorse land will suffer.

The iconic Cuckoo will also have been impacted as Meadow Pipits are the most common ‘host’ bird for Cuckoos to put their eggs in.

Mr Hatch added “It’s a disaster all ’round and fires like this cause such devastation that it takes several years for the natural landscape to get back to normal.”

Meanwhile, hundreds of locals who bravely fought the fire are planning a clean-up of the scorched area in the coming days.

Dozens of broken spades, as well as hundreds of water bottles and face masks, were left behind in the fire-fighting frenzy and they are all to be cleaned up.