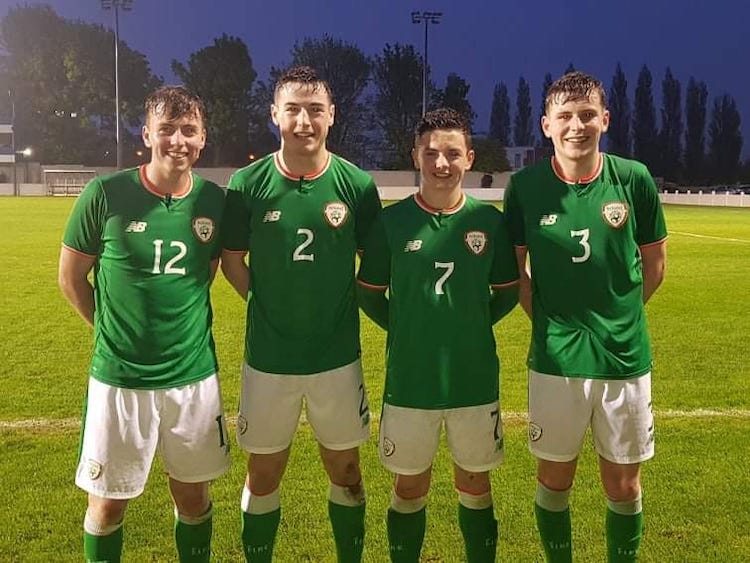 Four Donegal players helped the Republic of Ireland U18 Schools team to a 5-3 win over Wales in their final Centenary Shield game at Home Farm.

Daragh Ellison of St Eunan’s College and Corey McBride from Carndonagh Community School scored in the win for the team managed by William O’Connor.

Ellison and Jack Doherty (Carn CS) started for Ireland while McBride and Lee McLaughlin (Carn CS) were used as substitutes.

All four players are on the books at Finn Harps.

Ireland had finally relinquished their hold on the Centenary Shield last week when they went down 3-1 to Northern Ireland in Belfast, a result that clinched the title for the northern boys.

However to end the season on a high with a defeat of Wales, their first win of the four game series, gave William O’Connor’s side a boost.

Ireland dominated the opening half with local lad Ross Tierney of St. Aidan’s CBS, Whitehall catching the eye and they had taken a two goal lead by the break with Brandon Bermingham (St. Mary’s DS, Drogheda) netting both of the goals.

Wales made four changes for the second half and their positive start saw them level by the hour mark.

Central defenders skipper Lee Jenkins and Bobby Beaumont grabbed the goals with both coming from well delivered free kicks into the Ireland box by Jake Hampton.

Ellison restored the home advantage seven minutes later with a cool finish at the back post after Colin Kelly’s free kick and beaten the Wales back line.

Substitute McBride went on to stretch the lead to 4-2 on 78 minutes after he latched on to a loose ball and beat Gardiner when his free kick came off the Wales defensive wall.

The visitors hit back quickly and Jenkins struck home, his second of the game from another Hampton free with ten minutes remaining.

But Tierney competed the scoring, in time added on, when a goalkeeping mistake presented him with an unguarded goal and he duly stroked the ball home.

Harps coach O’Connor is Irish team manager, while Harps senior boss Ollie Horgan is on the backroom team and the squad’s physio is Milford’s Mickey McGlynn.