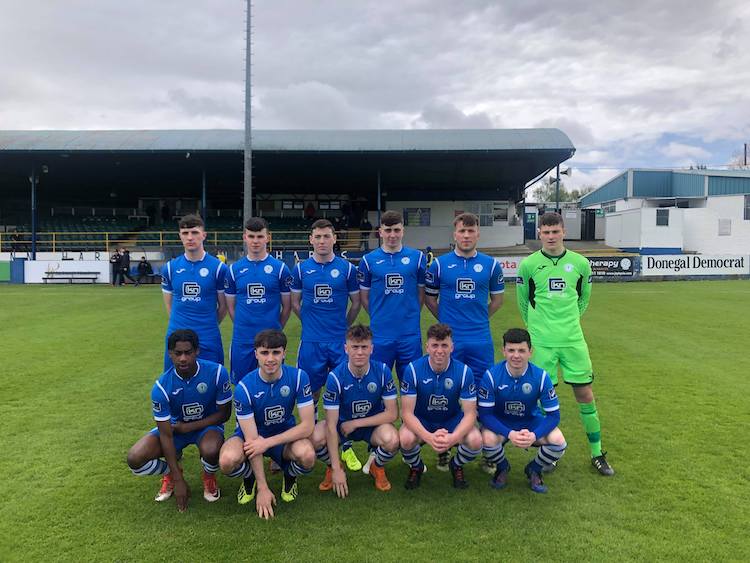 Despite the absence of some of their stellar names, Finn Harps U19s disposed of Monaghan United-Cavan FP with ease to continue their unbeaten start to the season.

Two goals in each half saw Harps sweep to a routine win that keeps up their fine early form.

Browne and Aduaka bagged the goals to send Harps 2-0 up at the break and they were in cruise control by the time headed attempts from Browne and Bradley-Walsh completed the rout.

Harps took the lead in the 11th minute as Browne hammered past Alan Derecki from close range after Cavan Monaghan failed to deal with Lee McLaughlin’s probing ball in from the right.

Corey McBride had earlier saw a deflected effort cause some panic in the area, while Joel Bradley-Walsh drilled off target from a free-kick.

Bradley-Walsh forced Derecki into a save just after Browne’s goal, but the Cavan Monaghan netminder was equal to his effort.

Derecki, with a fine double-save, thwarted Browne and McBride as Harps turned the screw but, at the other end, Arturs Balavins, somehow, fired over the Harps crossbar as he stretched in to connect with a deflected Seosamh Sheerin attempt that fell invitingly.

The hosts doubled the lead on 27 minutes when Aduaka finished from Ronan Gallagher’s centre.

Browne hit the bar amid a goal-mouth scramble in the latter stages of part one, while Gallagher curled inches over.

Harps were without Michael Gallagher, who was in the first team squad for last night’s derby in Sligo and who is expected to travel to Cork tomorrow ahead of Monday night’s Premier Division clash at Turner’s Cross.

Centre-back Keenan Diver – Harps’ match-winner in their last outing away to Bohemians – was out of the starting XI, while Daragh Ellison was also among the substitutes.

Ellison and McBride were goalscorers for the Republic of Ireland Schools in Thursday’s 5-3 win over Wales in the Centenary Shield at Home Farm. Stephen Doherty was also absent from the Harps roster here.

McBride, McLaughlin and Jack Doherty were included from the off here by Joe Boyle as Harps sought to continue their unbeaten start to the campaign.

Doherty was over the top early in the second half before Niall McGinley was denied by Derecki and the away ‘keeper saved superbly from Pat Loughrey’s powerful attempt.

After Bradley-Walsh hit the third, heading home while unmarked, Derecki saved with his legs from McGinley as Harps went in search of more goals.