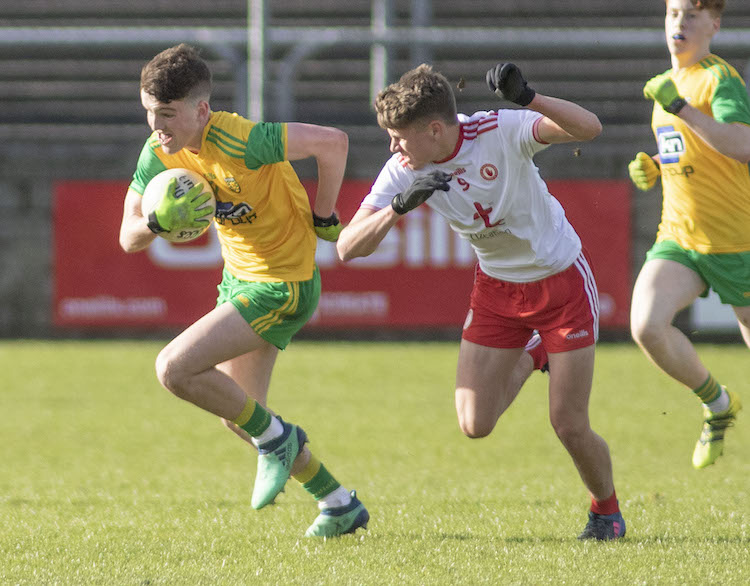 Listen: “I felt we were hard done by” – Donegal minor manager Gary Duffy

Donegal minor manager Gary Duffy launched a sideswipe at the match officials after his side were beaten by Tyrone.

Tyrone kicked four late points to see off the gallant Tir Chonaill, who stormed back into the tie via Paul O’Hare’s goal.

“I felt we were hard done by,” Duffy told Donegal Daily/Donegal Sport Hub.

“One of their first points was a penalty opportunity. There was a boot went out.

“The linesman said he drove the boot. I train my squad to be disciplined and when things like that happen, we expect action to be taken, especially when they’re in clear view.

“The linesman told me: ‘That’s him gone’. Maybe the referee didn’t see it.”

Duffy and Donegal – for whom Johnny McGroddy kicked seven points – were left to bemoan a 1-2 head start given to the visitors.

The Donegal manager said:  “The five-point start gave them a cushion and we found it hard to settle. We don’t know what was happening. You can’t gibe Tyrone a cushion of five points. You’ll be punished for that and it’s unforgivable.

Donegal will now go into the backdoor route. Duffy added: “We’ll take it on the chin. We’ll learn about big battles and hopefully we’ll turn things around.”