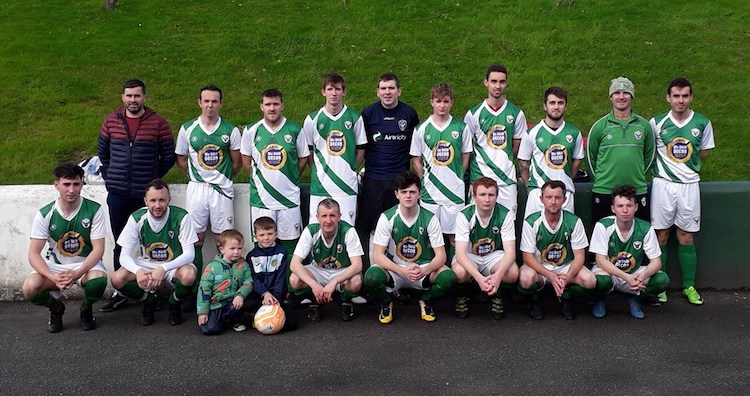 The hosts knew nothing less than a win would be good enough to secure third place and a playoff and they got the desired result thanks to four goals from Lee Guthrie and some great work from his supporting cast.

The visitors started the better and had the best of the opening 10 minutes.

Drumkeen then began creating chances. Gavin Sweeney missed a great chance before he turned provider for Guthrie to open the scoring in a great move which also involved Aaron Doherty.

Drumkeen were playing some good stuff and were soon two up. Doherty again was involved as he played in Lee Guthrie who was fouled in the box and a penalty was awarded.

Guthrie of course stepped up to take the penalty and calmly slotted it home. Guthrie’s third goal was the pick of the bunch when, after a great ball from Raymond Sweeney, he finished well into the bottom right hand corner.

Guthrie added a fourth early in the second half.

Drumkeen seemed to take their foot of the gas in the second half although saying that they could have added another few goals.

Convoy did get a goal back from Ronnie Carlin with about 20 minutes to go but that was as good as it got for them.

Paul McCauley made a point blank save with his face which must have hurt to deny them a second goal and although they were pressing towards the end Drumkeen held firm and booked their place in the play-off.

Passage to the Premier Division will be the prize on offer that day.