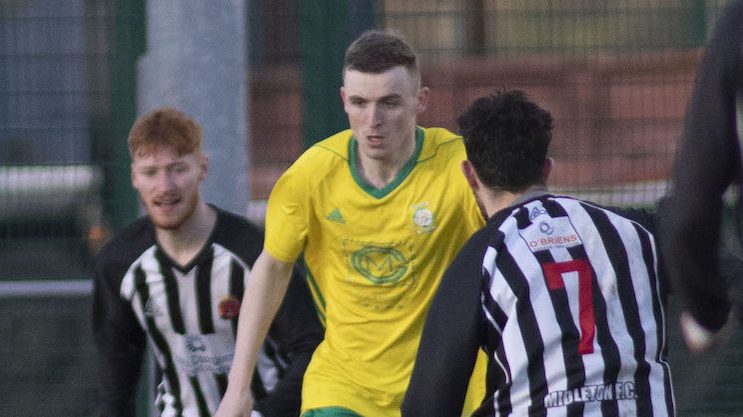 Bonagee United booked a place in the Knockalla Caravans Senior Cup final as they put the just-crowned Inishowen League champions Greencastle FC to the sword at Dry Arch Park.

Goals in either half by Jordan Armstrong and Ryan Rainey (pictured above by Joe Boland, North West News Pix) gave Bonagee a deserved win, but there was celebration, too, for Greencastle, who were crowned Inishowen League champions midway through this one thanks to Glengad’s draw with Carn at the Crua.

For long spells, though, the game was still anyone’s and it wasn’t until Rainey tucked in the second on 75 minutes that the win was safe for the home side.

Darren McMonagle, heavily involved after his introduction to the fray early in the second half, swung in the cross from the stand side and former Wolves youngster Rainey steered past Dylan Doherty at the near post.

McMonagle himself had a couple of cracks at putting the game beyond Greencastle.

However, he got his wires crossed after being put clear just after being sent on, while he headed wide from point-blank range after Rainey’s header across goal providing the opening.

McMonagle worked Doherty after scampering in from the right as Bonagee upped the ante.

The USL side – who were minus top scorer Garbhan Grant from their starting XI – took the lead in the 12th minute when Armstrong finished from a Micheál Doherty cross from the left.

Jamie McCormick had a go at finding an equaliser, but he was off target while Shaun Doherty curled over the top.

Michael Funston flashed narrowly wide, while Doherty did well to save from Rainey after he was picked out by Funston’s cross.

Just before half-time, McCormick had a sight of Ferry’s bottom corner from the edge of the area, but he shot wide.

There was a strange sight at the break as news filtered through from Glengad and Greencastle were able to toast the title before the start of the second half. It means a treble haul of honours for Greencastle, who have already won the Clubman Shirts League Cup and the Ulster Junior Cup.

McCormick bent one over Ferry’s goal, but it was as close as the visitors got and Rainey, finally, made safe the win for Jason Gibson’s men.

Bonagee will face Kildrum Tigers or Glengad United in the final.