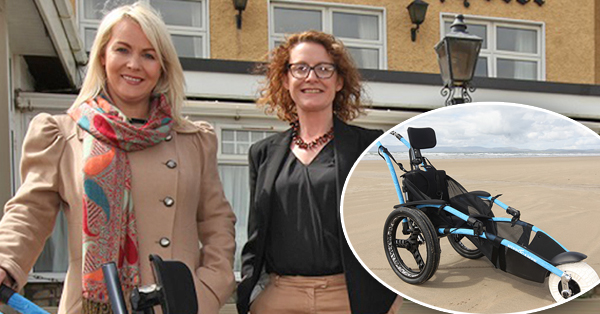 written by Rachel McLaughlin May 3, 2019

The accessibility of Rossnowlagh Beach has been greatly improved thanks to the efforts of two inspirational local women.

Council staff members Diane Patton and Grainne Campbell teamed up recently to fundraise for a specialist wheelchair for public users at the South Donegal beach.

And their hard work was highly praised on Thursday when the dream became a reality, just in time for summer.

The idea was first sparked by Diane Patton, a holiday home resident in Rossnowlagh, who witnessed first-hand the struggles experienced by her neighbour’s son accessing the beach in Rossnowlagh. Diane thought she needed to do something to help.

“As a holiday home resident in Rossnowlagh I was very aware of the need for this type of a beach wheelchair,” said Diane who lives in Castlefin.

“I have a neighbour in my holiday park who has a son with reduced mobility and for many Summers now he is at his happiest in Rossnowlagh and his dad has been able to get him around Rossnowlagh, close to the beach but never actually onto the beach due to the weight of his wheelchair.

“And after witnessing last Summer another lady trying to take her teenage son onto the beach in his wheelchair and getting stuck and his discomfort at having strangers help, I just thought there must be a better way for people in wheelchairs to experience the beach.

“I spoke to my colleague at work Grainne Campbell, who has previously held coffee mornings to raise funds for other charities and we decided to hold the annual coffee morning to help raise money for a specialist wheelchair for Rossnowlagh Beach.

“We held the coffee morning at the County House in Lifford and we were overwhelmed by the kindness of not only Donegal County Council staff but also the businesses in both our local area and in Rossnowlagh who contributed very generous prizes to the raffle.

The new Beach Wheelchair at Rossnowlagh which was unveiled on Thursday afternoon by Cllr. Micheal Naughton, Cathaoirleach of Donegal MD.

Diane continued: “This is now the fifth specialist beach wheelchair in Donegal, with others available at Rathmullan, Downings, Marble Hill and Carrickfinn.

Speaking at the unveiling Cllr Michael Naughton, Chair of Donegal Municipal District thanked both Diane and Grainne for their wonderful efforts in securing this beach wheelchair for Rossnowlagh.

He said: “It is truly uplifting to hear this story and it just highlights the importance of having this wheelchair available so that everyone has an opportunity to enjoy this beautiful beach.  The support that Diane and Grainne received both from Council staff and from businesses here in Rossnowlagh, as well as in other parts of Donegal and Derry shows just how important this is to everyone.

“We can sometimes take for granted the joy of being on the beach but it is not something that everyone has the fortune to experience but I hope now that more people can enjoy this experience and that this beach wheelchair will allow for many special moments and memories to be made.”

David Friel Coastal Officer with Donegal County Council explained that “the Hippocampe wheelchair allows users to fully explore the beach. Its design means that it can travel over softer sand and in to the water areas where wheelchair users would have been reluctant to take their own chair.  This means that wheelchair users or those with mobility issues can now fully enjoy the beach and its environment”.

He also acknowledged the important role played by everyone in securing these beach wheelchairs saying “I hope we can identify further partners at other beach locations to allow further roll-out of this very welcome and valuable service.  I’d especially like to thank the Sandhouse Hotel and Marine Spa, for facilitating the beach wheelchair here at Rossnowlagh beach and hope it is used and enjoyed for years to come”.

Duo praised for bringing beach wheelchair to Rossnowlagh was last modified: May 3rd, 2019 by Rachel McLaughlin