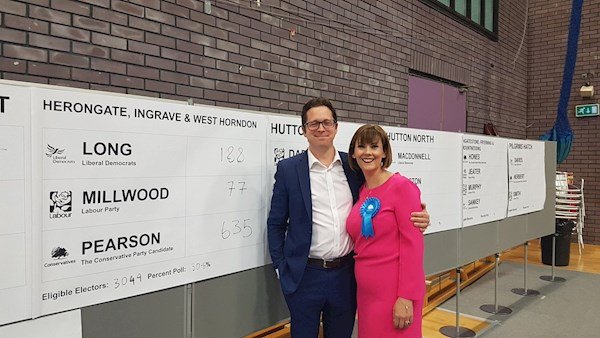 Donegal woman wins seat for the Tory Party in England

written by Stephen Maguire May 4, 2019
Facebook0Tweet0LinkedIn0Print0

A West Donegal woman has won a seat for the Tory Party in the local elections for Brentwood Borough Council in England.

This is the first time a native Irish speaker has won a seat.

Maria was elected in the Herongate, Ingrave and West Herndon Ward of Brentwood, an area in the London commuter belt.

Maria got a huge majority of the vote, approximately 70%, and said she was both surprised and proud of the result.

“This is the first time I have stood, and I was nervous about running, people don’t normally get in the first time. It was a personal vote I think, and I have to say that I’m very proud of the result.”

Speaking on the on the Rónán Beo show on RTÉ Raidió na Gaeltachta, Maria said that her husband, who’s Scottish, had owned a pub in the area for two years, something which meant that they knew many people in the area personally, and she felt that this helped her campaign a lot.

“People gave me a vote who would never normally have voted Tory, and indeed never had. It was a personal vote …”

Maria said that Brexit was a huge issue on the doorsteps and that they were ‘eaten alive’ on that subject.

She explained that there was strong support for a No Deal Brexit in the area, that all people wanted was to be going out of the EU, but that people had little or no understanding of the border question.

She believes that they can’t go with a no deal Brexit and said explaining the implications on the doorsteps was challenging.

“Over here, in the papers and on the radio, nobody was talking about the border and what was going to happen in Ireland, something that was of huge importance to me.

“They don’t understand the border, they think it’s like something they’ve seen on TV with guards walking up and down patrolling.

“I was explaining how there are houses that straddle both sides of the border, and they found it hard to believe.

“But it’s something that’s so important to me personally, and to everyone at home in Ireland.

“When I explained the implications to them of a no deal Brexit, then they began to understand and to come around to my point of view.”