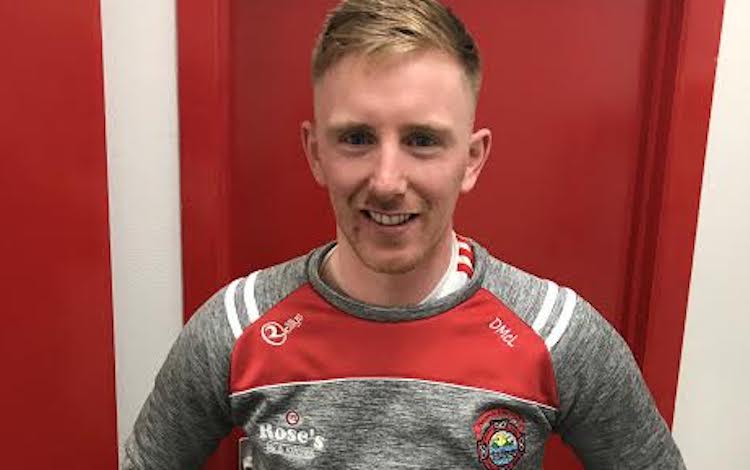 St Michael’s see off Bundoran thanks to super first half

St Michaels produced an excellent first half display to lay the foundations for this deserved win in Gaelic Park.

Cian McEniff opened the scoring for the home team after 13 seconds and Odhran McFadden levelled from a free almost immediately.

From the kickout Bundoran engineered probably their best move of the match with Michael McEniff blasting past the helpless Mark Anthony McGinley in the St Michaels net.

Two further points from the lively Daniel McLaughlin (pictured) and McFadden left it a one point game with only five minutes and a lively opening.

Full-forward Andrew Kelly hit the next two scores before Tommy Hourihane got his name on the scoresheet for the men in black and amber.

Over the next 12 minutes St Michaels produced some wonderful football hitting an impressive 1-7 whilst holding their hosts scoreless.

Points from Edward O’Reilly, Mark Anthony McGinley (free), a brace from Liam Paul Ferry, three from McLaughlin and 1-1 from Andrew Kelly left the visitors 10 points to the good with 25 minutes played.

Cian McEniff finally replied for the Seasiders but corner forward McFadden evaded the Bundoran rearguard to hit over another excellent score.

As the match entered first half injury time Michael McEniff palmed to the St Michaels net and despite the protests of the unhappy netminder McGinley the goal stood.

The second half was a different story completely with the visitors shutting up shop and going into defensive mode inviting a frustrated Bundoran to attack and then hitting them on the break.

After 18 second half minutes they finally split the posts with John McFadden finding the range.

Bundoran’s slim hopes of turning the tide took a fatal blow when they lost their goalkeeper Conor Carty and then both their midfielders Gary Clancy and Ciaran McCaughey to injury midway through the second half.

Bundoran finally registered a score from Cian McEniff on 57 minutes to bring his tally to 0-3.

Despite nearly 10 minutes of injury time Bundoran could only manage two further scores from Alan Russell to bring an end to a miserable day for the locals.

St Michael’s see off Bundoran thanks to super first half was last modified: May 4th, 2019 by Staff Writer