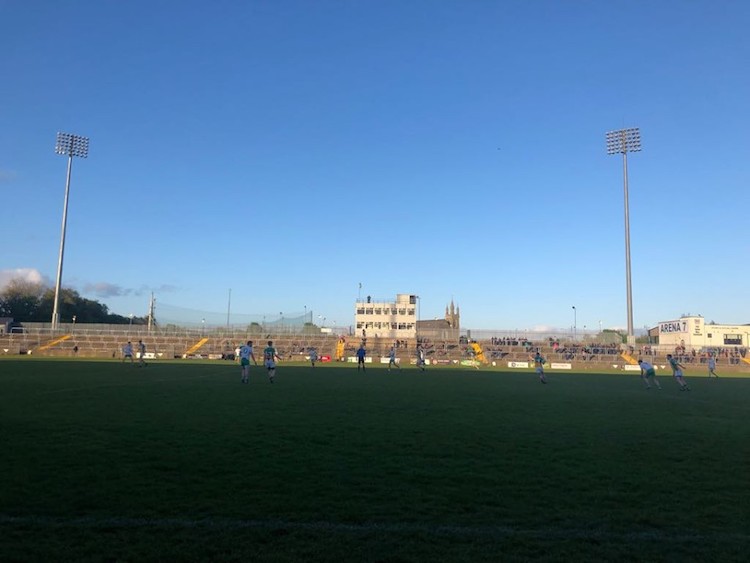 With the game’s penultimate kick, in the eighth minute of added time, Conor McGinty fired Glenswilly to a dramatic win over Sean MacCumhaills in Ballybofey.

On a night when there were three sent off in a feisty and fiery ending, the game clock was well into the red when McGinty hammered home to the River End net.

McGinty was quickest to react when Eoin Gallen, the MacCumhaills ‘keeper came to fist clear from Caoimhin Marley’s searching ball into the danger zone.

McGinty, a replacement midway through the second half, was the hero of the hour for a depleted Glenswilly, as they chalked up their second win of the campaign.

The contest had soured moments before McGinty’s match-winning strike.

With six minutes to go, and with MacCumhaills 0-9 to 0-8 in front thanks to a Stephen Mulligan free, a fracas broke out after a kick-out from Gerard McGrenra, the Glenswilly netminder, was intercepted by Chris Gallen and he was taken down.

Glenswilly defender Paddy Diver was given his marching orders for a strike on Steven O’Reilly at the outset of the melee.

Others were fortunate to have been spared the ultimate sanction by referee Jimmy White and several – on both sides – could count themselves lucky that the man in the middle was without official assistants.

In added time, Marty Gallagher was sent off for a high challenge on Oisin Crawford, while Tarlach O’Boyle was given a second yellow card for a challenge on Steven O’Reilly.

By that stage, Mark McAteer had drawn Glenswilly level, while both teams spurned big chances in those frenetic stages.

Brian Lafferty will be haunted by the memories of that moment, in the 56th minute, with his team leading by a point, when he prodded wide of a gaping goal. It felt like a seismic chance as it happened – and so it proved.

Martin O’Reilly and Mulligan were off target with frees for the home side. Mulligan pulled to the right after a free was given against Kealan McFadden, who was helped from the field having come off the worst.

MacCumhaills paid the price for a series of misses when McGinty pounced and Gallen’s kick-out was the last of the tie.

Steven O’Reilly, Gavin Gallagher and Martin O’Reilly had MacCumhaills three in front, but McFadden and a brace from Marley had Glenswilly back on level terms.

After an error-ridden first half, characterised by its missed opportunities, the visitors led 0-5 to 0-4 at the short whistle as Marley’s long-range free and a tidy point from Brian Farrelly gave them the edge for the first time.

MacCumhaills – who lost Darren O’Leary to injury early in the game – hit back through Luke Gavigan and Lafferty in the opening minutes of the second half.

McGrenra was lucky to see Gary Wilson pop wide when he dispossessed the Glenswilly net-minder close to his goal, but Glenswilly held away again thanks to a pair of Marley frees.

Marley cancelled out Joe Dunnion’s effort and, after Mulligan arched over for the hosts, all hell momentarily broke out.

The mercury shot up and the referee would have needed eyes all around his head as he attempted to restore order to the chaos.

When the dust finally settled, Glenswilly managed to carve up what could be a vital win and MacCumhaills were left cursing one that very much got away.