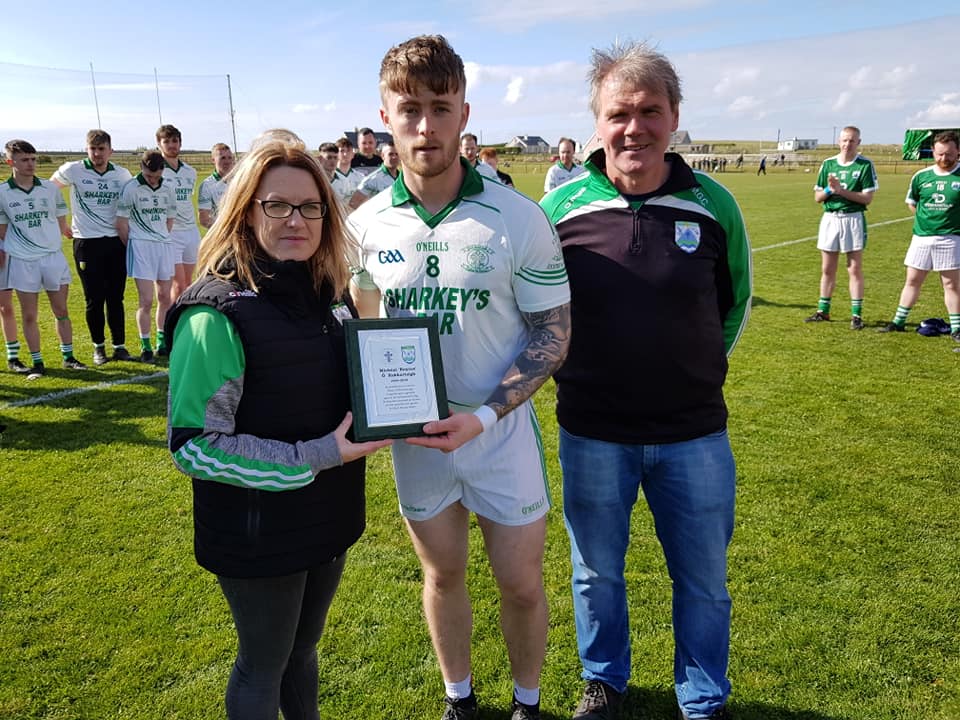 By Chris McNulty at Magheragallon

Extra time was looking likely when Paddy McCafferty drew Naomh Muire level after a surge from Gaoth Dobhair saw them hit 1-3 across the final ten minutes.

But McFadden and Gillespie – who kicked 12 points between them – stepped up to win it and fire Gaoth Dobhair into a final meeting with Downings tomorrow.

Gaoth Dobhair almost fashioned a goal in the 15th minute, but Naomh Muire goalkeeper Declan Ward intercepted Colin Ferry’s ball across the danger zone, which had been intended for Frank McGee.

Two points from Gillespie had Gaoth Dobhair ahead by the 12th minute, with his brace bisected by a free converted by Ward at the other end.

Thomas O’Donnell and Gillespie traded points before Naomh Muire got a massive shot in the arm when Jack O’Donnell hit the net from close range. O’Donnell took a pass from Darren Sweeney and drilled past Charles John Doherty to give the Lower Rosses men the advantage.

Before the game, Naomh Muire made a special presentation (pictured) to Gaoth Dobhair to commemorate the death of Gaoth Dobhair player Micheál Roarty, who was one of four young men to lose their lives in a road traffic accident earlier this year.

Gillespie’s frees kept Gaoth Dobhair in the hunt, but a big score from Paddy McCafferty and another by corner-back Laurence Coyle sent Naomh Muire 1-4 to 0-5 ahead at the short whistle.

Naomh Muire have seen a big turnover of players in recent times. Indeed, from the side that won the Championship in 2013, only McCafferty and Adi O’Gara lined out here.

The likes of Paul Boyle, Sean Boyle, Hugh Boyle, Harry Harden, Daragh White and Jack O’Brien are among those residing away from The Banks at present.

Two Stephen McFadden frees inched Gaoth Dobhair ever closer, but Ultan Boyle landed a monster point from the right-hand side just after his introduction to steady the wobbles.

Eight minutes from the end, Mark McFadden tucked home from close range and Gaoth Dobhair were level when Gillespie scored his sixth of the evening.

Michael Roarty looked to have won it for Gaoth Dobhair but, in the first minute of added time, McCafferty slotted over and extra time was looming when Stephen McFadden’s free won it for the home side.

Gillespie’s seventh point made it safe with the final kick of the game.

Gaoth Dobhair pip Naomh Muire in semi-final thanks to late rally was last modified: May 5th, 2019 by Chris McNulty