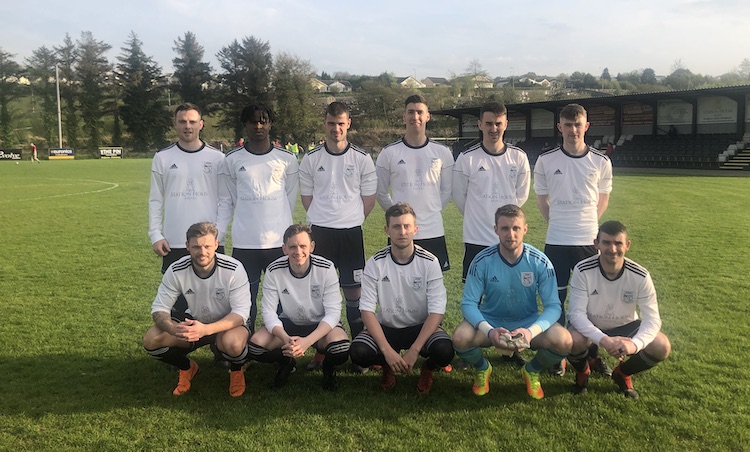 written by Staff Writer May 5, 2019
Facebook0Tweet0LinkedIn0Print0

Letterkenny Rovers rounded off their season with a derby win in an entertaining encounter against Bonagee at Leckview Park on Saturday evening.

Rovers won the Donegal News League Cup last week and were determined to finish on a high while Bonagee have the Knockalla Cup final to look forward to in a few weeks’ time.

It was Rovers who were quickest out of the blocks and took the lead on seven minutes. A superb ball from Ryan McConnell found Jonny Bonner, who had beaten the offside trap, and he slotted past Eugene Ferry in the visitors’ goal with ease.

Rovers had loud claims for a penalty waved away by match referee John Coll as Luke Nelis went down under the challenge of Mark Harkin on 14 minutes.

Bonagee’s relief was shortlived as, just moments later, Rovers were awarded a penalty when a visiting defender was penalised for a handball.

Lee Toland scored from the spot in the final win over Cockhill and he repeated the feat when slotting low past Ferry as Rovers were very much in the ascendancy at this stage.

Rovers had a couple of chances to extend the lead in a dominant opening half hour but it was Bonagee who came right back into the game with Micheál Doherty blazing over on 32 minutes before Tommy McMonagle smashed one off the crossbar on 39 minutes.

Jordan Armstrong ought to have done better but screwed his shot over with the last meaningful action of the opening half.

Bonagee started the second half brighter and Sean Hume fired wide just after the restart before they got one back when half-time sub and former Finn Harps striker Chris Breen ran onto a long ball before firing coolly past Rory Kelly.

Breen fired just wide on 64 minutes before Bonagee drew level on 68 when Tommy McMonagle broke free on the left hand side before firing a low cross into the box and Breen was at the near post to convert giving Kelly no chance.

The visitors’ tails were clearly up but Rovers, to their credit, got a real foothold in the game for the last 20 minutes.

They got the winner with six minutes to go when, from a Ciaran Kelly throw-in, Kevin McGrath created a mountain of space before firing home a cracker with his left foot leaving Eugene Ferry motionless in the visitors goal and Rovers saw the game out well to claim the points.