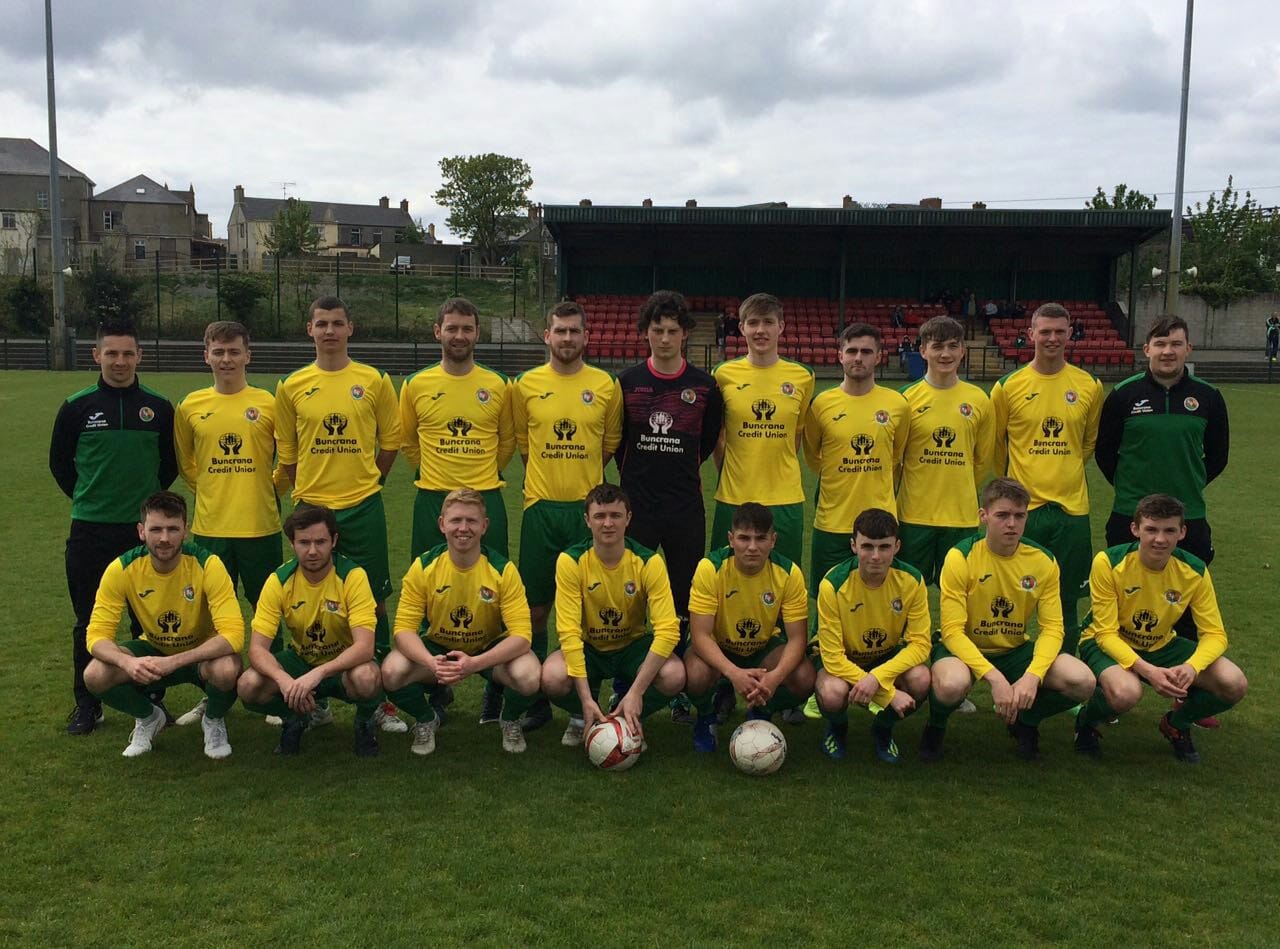 Cockhill Celtic Youths won promotion to the Jackie Crossan Premier Division thanks to a play-off win over Clonmany Shamrocks yesterday.

In an end to end first half Cockhill had the first opportunity in the opening minute when Darragh McDermott broke into the box from the right wing but Patrick Harkin clawed his shot around the post to concede a corner.

Clonmany created their first chance in the 6th minute when Jake Harkin’s pass found Mark McLaughlin’s run into the box but Kyle Dougal came out to block Mark’s shot.

Cockhill took advantage of a Clonmany error in midfield in the 16th minute to break forward through Shane Doherty on the left wing who advanced into the area  but Patrick Harkin was off his line quickly to avert the danger.

Clonmany forced another save from Kyle Dougal in the 22nd minute when Jake Harkin ran onto Mark McLaughlin’s pass but Kyle came out quickly to save with Marks follow up shot going wide of his  right hand post.

Cockhill took the lead in the 27th minute when a cross field pass found Shane Doherty in space on the left side of the box and his cross found Darragh McDermott at the right post and he finished to the net from close range.

Clonmany equalised in the 29th minute when Patrick Harkin’s clearance was controlled in midfield by Mark McLaughlin and his pass found Jason Devlin on the 18 yard line and he curled a shot low past Kyle Dougal to the bottom left hand corner of the net.

Clonmany almost grabbed a second in the 35th minute when Oisin Hession ghosted down the right wing but his cross was headed narrowly wide by Steve Harkin. The final chance of a ding dong half saw Clonmany’s Declan McLaughlin cross from the right wing for Jason Devlin but he saw his header loop over the bar.

Cockhill started the second half brightly and regained the lead in the 52nd minute when Darragh McDermott found himself in space on the right side of the Clonmany box. Darragh’s initial shot was saved by Patrick Harkin but the ball broke kindly for him and he curled a shot to the top right hand corner of the net.

Cockhill added a third goal in the 60th minute when Adam McLaughlin broke clear down the left wing and was left one on one with Patrick Harkin and he finished coolly, shooting low into the bottom corner.

Clonmany almost pulled a goal back in the 66th minute when Jason Devlin broke down the left wing and pulled the ball back for Jake Harkin at the 18 yard line but his shot was tipped over spectacularly by Kyle Dougal.

Kyle Dougal was called on again two minutes later when Jason Devlin broke into the box but again he came out quickly to close down the space and save Jason’s shot..

Clonmany threw everything into attack in the final 15 minutes and almost reduced the deficit in the 78th minute after Jason Devlin collected the ball on the edge of the box and worked some space to get away a shot but yet again Kyle Dougal was well positioned to save.

The final moments of the game saw Clonmany mount one last attack but Mark McLaughlin saw his shot from the edge of the box go over the bar and Cockhill recorded a 3-1 victory to clinch promotion and relegate Clonmany to the First Division in the process.