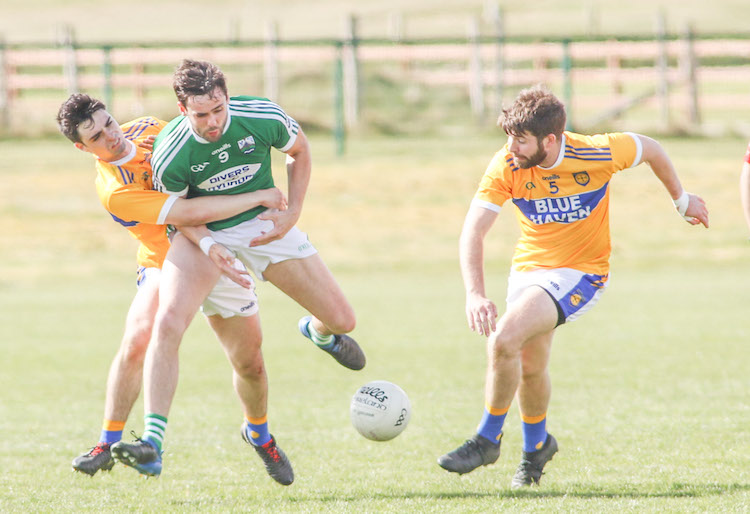 Mark Sweeney’s goal after 13 minutes was the game’s big score as depleted Kilcar won by three on a day when they had a glut of absent names.

Gaoth Dobhair managed just two points in the second half and, once Kilcar pulled away, they never looked in danger of being reeled in.

Two minutes into added time, Gaoth Dobhair’s woes were compounded when Eamon McGee was sent off by ref’ Robbie O’Donnell.

Kilcar hit 1-3 in a lethal five-minute spell in the first half after falling three behind early on – and it would prove the key period.

Matthew McClean – who hit nine points yesterday against Dungloe – got them off and running in the 12th minute.

McClean slotted over another before Kilcar rocked Gaoth Dobhair back on their heels with a goal.

From the kick-out after McClean’s second point, Christopher Sweeney’s pass was cut out by Sweeney. The Kilcar forward punished the error as he fired to the net to give Kilcar the edge.

Both teams were without their respective county contingents, with Kilcar further hampered with the likes of Mark McHugh, Stephen McBrearty, Aodhán McGinley, Andrew McClean and Oran Doogan absent.

Midfielder Ciaran McGinley picked up an injury yesterday and was also kept to a watching brief.

Barry Doherty did welcome back Conor McShane and former Donegal star Michael Hegarty into his side, with Gaoth Dobhair missing Gary McFadden from the side that overcame Termon in yesterday’s semi-final.

After Sweeney struck gold, McShane boomed over from long-range to continue the purple patch. Veteran McShane led the charge for Kilcar and was named as Man of the Match after a dominant display in midfield.

Mac Niallais kicked Gaoth Dobhair into life with a brace and Eamonn Collum levelled things up for the home side.

Conor Doherty and Collum traded scores and it was all aboard – at 0-7 to 1-4 – as they parted for the half-time refreshments.

McClean could have had a second Kilcar goal in the first minute of the second half, but he shot wide after dispossessing Sweeney.

Gaoth Dobhair scored just once in the opening 20 minutes of the second half – a point from Seaghan Ferry that momentarily evened the scoring.

Kilcar kicked on with Doherty, McClean and Ryan O’Donnell opening up a three-point lead.

Collum, from a free, ended Gaoth Dobhair’s barren spell, but Brian O’Donnell restored the three-point cushion and put Kilcar on track for the silverware.

Understrength Kilcar make most of their lot to topple Gaoth Dobhair in Gaeltacht final was last modified: May 6th, 2019 by Chris McNulty