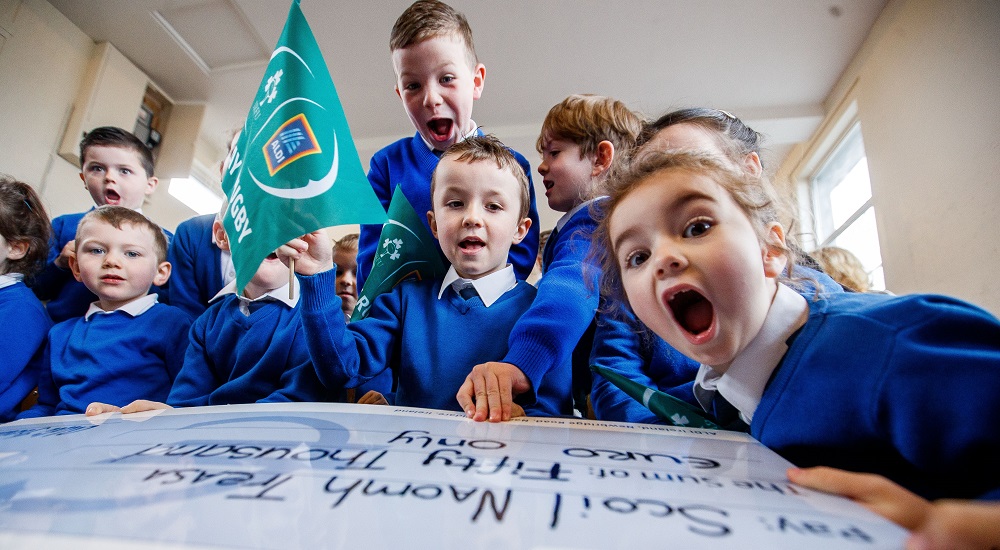 written by Rachel McLaughlin May 9, 2019

Staff and pupils of a small Donegal school have combined teamwork and ambition to scoop €50,000 in a nationwide competition.

Scoil Naomh Treasa in Clonmany were the lucky winners of this year’s Aldi Play Rugby sticker competition for primary schools.

The national school was one of two winners to be awarded the top prize of €50,000 to give their sports facilities a makeover.

The prize was well-earned too, as the pupils worked together over the past four months to collect 300 Irish rugby stickers to complete their entry poster.

Former Ulster Rugby Player Chris Henry recently surprised the pupils of Scoil Naomh Treasa to present them with their prize.

Brigid McGonagle, Principal of Tiernasligo NS said: “We have achieved this win by teamwork, just like a rugby team, our small school Tiernasligo National School (Scoil Naomh Treasa), Urris which is a focal point in our Community have won €50,000 by believing that together we could win, by filling in posters with IRFU/Aldi stickers.

“This is a beautiful, memorable time for our school and we will use the fund wisely. Thanks to our dedicated, hard working  staff, Board of Management and the parents of our school and Go raibh míle maith agaibh Aldi Play Rugby.”

A host of additional prizes was on offer in the Aldi Play Rugby sticker competition.

Scoil Baile An Caislean in St Johnston also won €2,500 worth of training equipment.